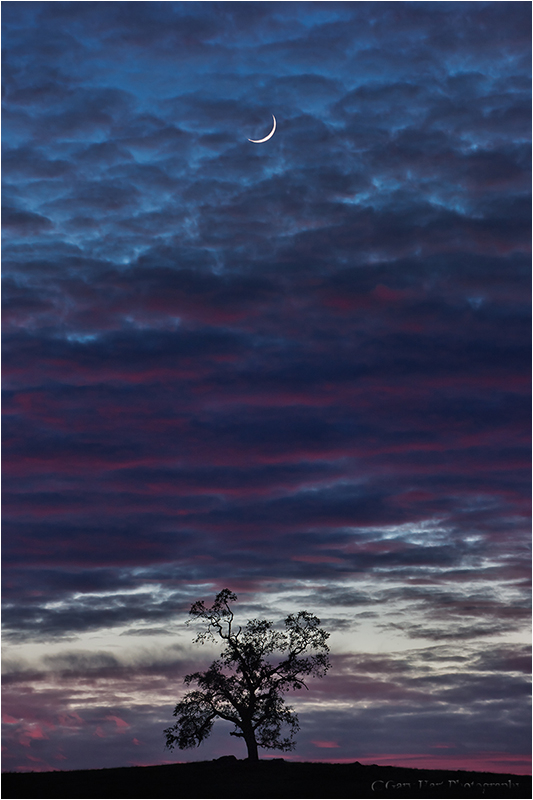 Here's the second post from my recent foothill foray. Comparing this image with my earlier image, captured within minutes of each other, one thing that particularly strikes me is the different moods they convey. The first image was more expansive, creating a greater sense of the world beyond the frame; this image is composed tighter and conjures feelings of isolation.

Many photographers are oblivious to the power they have over their viewers' experience, or the value of wielding that power. Instead, they're satisfied with merely pleasing or impressing. The result is lots of nice but homogenous images, not unlike top-40 music, where one groundbreaking success generates a flood of uninspired clones. Catchy tunes are fine for a few listens, but where would music be today if the Beatles had simply duplicated the hits that preceded them, or repeated the same formula with each album?

For an image to succeed as "art," it must do more than merely document a pretty scene or moment. No matter how beautiful that moment, art must touch something in the viewer and resonate on a personal level, and somehow reveal its subject or theme as it hasn't been seen before. Of course that sounds great in theory, but how is it accomplished with a camera? Start by consciously avoiding what's succeeded before and following your own creative instincts wherever they take you. Discard the frequent failures and embrace the few surprises. Following your creative instincts won't guarantee immortality, but doing otherwise will certainly assure mediocrity.

My own photography took a huge leap forward when I started photographing simply to please myself. The result was far more images that somehow (as if by magic) reflected my feeling about the scene I was photographing. Rarely do I consciously manage an image's mood when I click my shutter, but it does seem the more I tap my own relationship with a moment, the more unique, personally gratifying, and successful my images are.

When I photographed this foothill scene, things were going on that I didn't consciously consider until I looked at the images later, but in hindsight I realize activity outside my frame affected my experience and therefore guided my choices that evening. I shot from the shoulder of a well-traveled country road where I was buzzed by several cars each minute. So while the speeding vehicles made me very aware of the larger world, they also forced me to insulate myself. I don't think it's a coincidence that I ended up with images that convey both of these extremes.

Because familiarity is the first step toward intimacy, on this evening (as with most shoots) my compositions started wider and became tighter as I grew more familiar with the scene and less distracted by traffic. At the beginning, when I was more aware of the cars, my compositions encompassed the greater landscape surrounding me; as I shut out the distractions and started feeling more insulated, I subconsciously started isolating my subjects as well.

So what moved me to this composition? Hmmm.... At the time it simply felt right, but now I can say that even though the moon and the tree share the same frame, they're each alone in their own form of isolation--the tree grounded in its terrestrial world, the moon soaring in its celestial world. Centering each on the vertical centerline gives them equal power in the frame. As I write this I share my space at Starbucks with about two dozen other people similarly isolated at the center of their own world (the epitome of being "alone together"), it occurs to me that the shared isolation of the tree and moon here is a great metaphor for the current human experience of the world.

On the other hand, maybe it's just a pretty picture....

simplicity and elegance, I love it!

This is beautiful :) Merry Christmas Gary!!

stunning and superbly balanced composition! nice offset of the tree silhouette against the crescent moon high above with some wonderful colours tones and mood!

Gary - I love this frame. I like how the moon and tree line up and then the cloud cover and color connect the two...but they also seem so far apart.
Vic

Fantastic capture ! I wish you and your family a Merry Christmas... all the best :)

nice to be alone in good company ;) great shot ; i wish you a great Xmas festive time !

Gorgeous! Thanks for all of your help this year. Wishing you a joyous Christmas!

Dear Gary, Wish you a merry X-Mas...Hope you have a great day!!

Great picture. It doesn't get much better than that.

I like this single tree better. Wonderful image, Gary. Thank you!

It is a pretty picture! But you're right, it is so much more than that....If we couldn't somehow identify with the human elements in images they would all just be pretty pictures, and we'd move on. I for one am so glad they are more than just something nice to look at!

I absolutely love this photo. Great work once again!