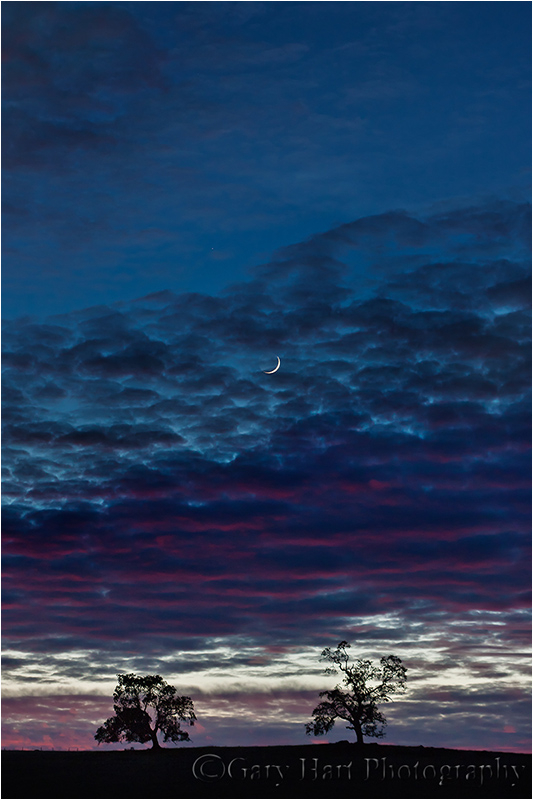 To non-natives, California is endless beaches and soaring mountains. But to most of us born and raised in the Golden State, nothing says home like the gentle, oak-studded hills encircling the Central Valley, the true heart of our state. Rarely spectacular but always beautiful, I recharge simply by navigating their gentle undulations, camera or not.

Year-round these colorful hillsides form the perfect canvas for our majestic oaks. In winter and spring they're so green it almost hurts my eyes. By March the wildflowers appear, led by waves of poppies that can paint entire slopes in gold and yellow. Summer's tenacious sun burns the wild grasses a dusty gold, the perfect complement to the relentless blue sky that persists all the way into fall. Overseeing these seasonal changes are the proud oaks, each one seeming to have staked out its own territory, spreading its strong, meandering limbs with the confidence of a preening peacock.

I'm forever on the lookout for particularly photogenic oaks to photograph against the sunset sky. When I find one, or perhaps a group of two or three, I make a point of visiting when I can accent the scene with a crescent moon. The trees in today's image have been on my radar for a while, and have in fact been the subject of earlier images (they were on the cover of "Sierra Heritage" magazine a few years ago). But since I'd never photographed them with a moon, I circled last Tuesday, when a 5% waxing crescent would be ideally positioned in the sunset sky.

The day arrived cloudy, with a light rain, and I consider bailing. But when the afternoon weather report promised improving conditions, I decided to give it a shot. I arrived here about 45 minutes before sunset and could see already the sky to the west had started to clear (chalk one up for the weatherman). While waiting for the moon I photographed a nice sunset, then held my breath as fast moving bands of clouds intermittently obscured the darkening sky. When the sun left the moon teased me, peeking only occasionally through narrow gaps, and I moved quickly to beat the rushing clouds that closed as quickly as they opened. Usually I had time for no more than a half dozen frames before the moon disappeared. Each time that happened I took the opportunity to position the crescent a little differently relative to the trees by shifting to a different vantage point. I exposed for silhouettes that emphasize the trees' outline against the rich, red twilight. Soon stars began popping out but I didn't stop until the moon disappeared for good behind a more permanent cloud bank.

Dark beauty!!! How pretty all of the colors are, well taken!

You are so right! The oaks just say "home" to me....so many great memories of climbing them, and feeling the great texture of the bark! This is the kind of scene that really says California! And you are so in touch with the emotions that this type of image brings up. So wonderful!

Wow! Awesome!! :)) And that is a beautiful introduction to your city. Really appreciate your patience.

Absolutely AMAZING Gary! Love it so much :)

I really like this image Gary. It has a certain eloquence to it. Your patience and persistence paid off!

Hi Gary - Well I need to chime in as well...as you know, a Roseville native like me regards the rolling hils, brown grass and Oak trees (whether they be Live oak or Valley oak) as the true and "quintessential California!" When I close my eyes and think of California, that is what I first see...Then, for me, comes the deserts, mountains, and forests...the beaches always come last. Your narrative is so true and this image takes us to another level yet...Those silhouettes are just magnificent...and the colors on the varied cloud bottoms fire back at me...but my favorite part of this one, Gary, is the little cumulus gray clouds surrounding the moon and apart from the pink ones..they are like the leading convey that is there to protect and guide the moon and watch over the light. What a magical, eloquent image!!! Just beautiful Gary. Thank you so much for your words and your images!

excellent photo from the strong tree silhouettes to the wonderful cloud patterns to the crescent moon hiding above! a stunning shot of nature and masterly captured too! i really like the colour and light transition from bottom to the top as well!

A wonderful shot of the moon, clouds and trees....well done!

Punit from Somewhere in, India

Lovely! The clouds, the tones of the evening skies, the moon and the oaks - all set so perfectly by mother nature. Wonderful capture!

Wonderful that you got sunset clouds as well as the crescent moon in one shot. This is just beautiful.

What is interesting here is that you took this tall, in portrait, and yet with all that sky and layers of cloud and light those trees still look like they have considerable size. They don't seem diminished at all but accentuated. Very nicely done!

Oh I totally agree with you on this.. Although I have lived in Cali for 2.5 yrs only.. I feel its my second home. I keep visiting time to time ..