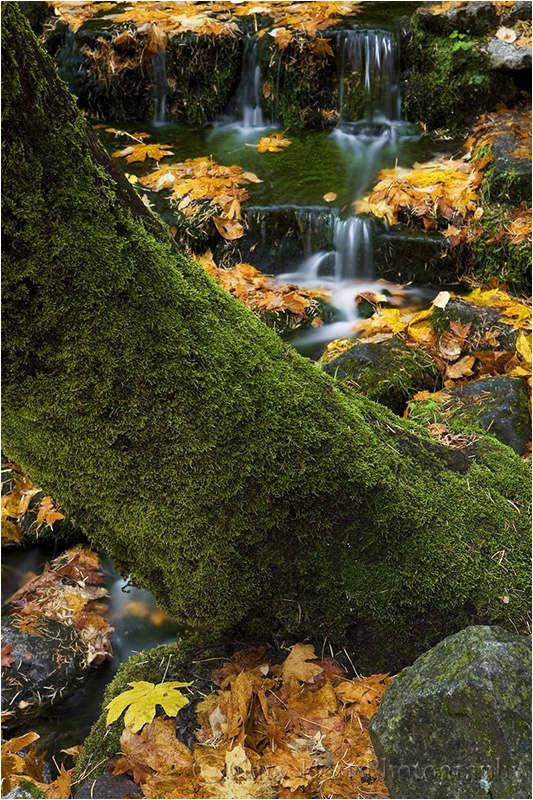 I've said it before, and I'm sure I'll say it again: Yosemite's fall color is underrated. Yosemite's color may not stand up to New England and the Eastern Sierra (among others), but it's still quite nice, and when paired with the rest of Yosemite's always spectacular scenery, it's pretty tough to beat autumn Yosemite.

A particular Yosemite fall highlight is Fern Spring. Fern Spring is a photographer's favorite in any season, an opportunity to compose intimate scenes of reflections and staircase cascades. Time your visit just right in the fall and you can add a carpet of color to your Fern Spring frame. Nevertheless, I've photographed here so much that I sometimes find inspiration difficult. But, with or without a camera, it's such a nice little spot that I can't imagine foregoing the stop entirely--the difference is now I don't stress about making a picture. And guess what--not only do I still find them, I think I like my new images better than the earlier ones. So what's up with that?

Sometimes I think we just need to shake things up, to get out of our standard thought processes. For example, in previous visits to Fern Spring this tree was an annoyance, something to work around. But as I stood back and admired the scene one gray fall morning, my eye fell on a single leaf resting at the tree's trunk. Rather than lament the leaf's proximity to this "intrusive" tree, I removed my camera from the tripod and played with compositions. Much to my surprise, my camera seemed to stop (imagine a diving rod locating water) when the tree split my frame diagonally. Ignoring photography "rules" instructing me otherwise, I brought in my tripod, refined the composition, and came up with one of my favorite fall color images.

So, did I stumble upon a photography breakthrough, the landscape photography equivalent of Einstein's Special Theory of Relativity? I think not. But for most of us mortals (and perhaps even Einstein himself), inspiration comes in small increments. By definition creativity isn't repeating what's already been done, it's venturing beyond the known and comfortable and into the unfamiliar. Had I approached this scene in my standard fashion, or let preconceived biases limit my vision, this shot would surely have been lost.

Hey Gary...Before you know it, fall will be upon us ! Some of my favorite images are from Fern Spring. I do like how you were able to use the tree in your composition.

I love the depth that the tree provides in this! I get a real feeling for the "larger picture" from this....I have not been to Yosemite this year, and would love to pop up there in the fall!

This is gorgeous; the little 'packets' of yellow leaves 'jump' right off the screen in what looks almost like a 3-dimensional image.

Hi Gary - Absolutely, I love your incorporation of this tree! The added element, to me, is a plus here. The wonderful moss and trunk lead us to the double-stepped baby waterfalls and then our eyes dance all around enjoying all the leaves and color. This is wonderful! And your words are always such a joy to read. The lessons I learn from your blogs are so appreciated. Thank you for this marvelous and best of luck at Big Sur!

fantastic composition! the tree and its mossy surface add a nice break from the usual waterfall scene! i like it a lot! the sprinkles of bronze and yellow leaves are superb as well!

love the quietness of your image...

Such a peaceful scene captured so well! Wow!

This is magical, I expect to see little faeries flitting around.. pristine, untouched nature.

absolutely beautiful! love the wide DOF and the 'silky' water

Beautiful fall shot! I love fall, its my fav. season. Its been so dry here this year i dont know if we will have much of a fall. So thanks for such a beautiful scene!