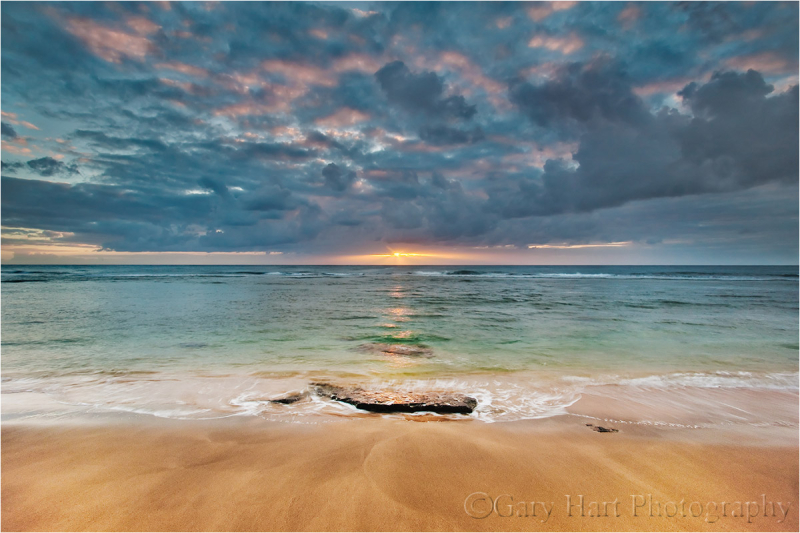 Is there ever a bad sunset on Hawaii? Sunrise? My preliminary investigation seems to indicate that there in fact is not, but I think a definitive answer requires more research, a task for which I'm more than happy to volunteer (that's just the kind of guy I am). But seriously, every day on Hawaii seems to include some combination of clouds and sunlight--enough clouds for amazing skies, and enough sunlight for amazing color. In other words, a photographer's paradise.

In case you missed it, I recently returned from Hawaii where I assisted Don Smith's Kauai workshop. Each day we'd rise before the sun, head to some east-facing beach (either by car or simply by taking the 50 yard stroll to the beach behind our room), pick a composition, and wait for the inevitable show to begin. Color, shafts of light, rainbows--we saw it all, and while each was different, it was pretty difficult to say any one was better than any other. In the evening we'd repeat the process at a west-facing beach, then go to dinner. Not a bad gig.

Ke'e Beach is a sunset destination, literally the end of the road, a spectacular exclamation point punctuating Hawaii's State Highway 560 on the northwest side of Kauai. Just beyond, accessible only by foot, water, or air, the sheer Nā Pali cliffs jut from the Pacific and disappear into the clouds. A coral reef protects the beach, calming the surf and creating an ideal environment for swimming, snorkeling, and fishing. Many visitors forego those activities in favor of simply sitting on the beach waiting for the sun to disappear.

This was the evening before the workshop began, my first visit here. Scanning the scene for composition options I decided frames including the bay and cliffs would require working around too many people, so I turned my attention the beautiful sky around the sun. As nice as the sky was, I still wanted something in the foreground for depth. The pristine sand was a good start, but wanting more I chose this flat rock outcrop as my foreground anchor. I set up my tripod close enough to the surf that an occasional wave would swirl about my ankles, etching ephemeral arcs in the sand. I went with my 17-40 lens, dialing it wide to exaggerate the beach and give the background an expansive feel.

While waiting for the sun to drop to the horizon I readied my graduated neutral density filters, set my camera to f16 to ensure a sunburst, and determined that ISO 200 would give me the shutter speed with just the right amount of motion blur. Next I played with compositions, deciding that (despite "rules" to the contrary), I wanted the horizon in the middle and the sun bullseyed. With everything ready, I was able just stand and enjoy the view.

When the sun popped from the clouds I started clicking, timing my exposures with the waves, some with the surf flat and others with of motion around the rock. After a few frames I'd adjust the composition, keeping the scene centered but playing with variations between horizontal, vertical, wide, and tight. I ended up with several I like, and who knows, maybe tomorrow I'll decide I like the vertical version better.

A bad sunset in Hawaii ? I doubt it. They are my fondest memory of Hawaii.
I hope you are recording the daily results.
The color of this one is really stunning.

I like the symmetry and colors in this shot!!

Hi Gary -Well I, for one, am happy that you put the horizon (and sun) in the middle, as it encourages the eyes to immediately go there...But to me, the coolest "surprise" is when one draws the eyes backward one sets them upon the exquisite sand that Gary has displayed so lovingly and beautifully with the awesome 17-40mm lens and settings. I LOVE the sand.... and the colors and composition all say "serenity". What a totally, absolutely marvelous image this is!! Thank you gary!

Awesome! I love the subtle things going on here- the way everything lines up....rocks, reflection on the water, and the sun- I get a calm, easy feeling from this.....Many "rules" are broken, yet all is right with the world! :)

Beautiful! You used square graduated neutral density filters of what type (ie .6)? Did you use more than one filter?

@Kelly Morvant: Thanks, Kelly. To even the light I probably stacked my 2-stop hard and 3-stop reverse GNDs. Having a straight horizon helps a lot.

A while since I was last here Gary, this is a belter, a real stunner!

Oh my word! This is simply beautiful! It's one of my favorites of yours - for sure! The colours are incredible. I just can't get over the clouds - so surreal looking. Bravo!

This is such a well crafted image. Normally photographers avoid too much symmetry, but here it really works. Great use of your ND as well. Just wonderful. Wish I was there!

It's good to see you guys [you and Don] expanding your workshops. I haven't seen you do this area before. Your skills cross the ocean well.

perfect job on this scene - wonderful light and colours and excellent feeling of space! i think that having the main focal points (sun and the rock), as well as the horizon, more or less central works nicely here and creates good balance!

Gary, this is beautiful, and so serene. The composition is perfect. Who said that you cannot have the horizon in the middle? It works perfectly here! Envy you your time in Hawaii. My sis lives on the Big Island - I was there for a few days recently to help her celebrate her birthday, but no time for the volcano this time. BTW, you and Don really must get up to Mauna Kea next time, which I am sure you will! Thanks for sharing this wonderful shot today!

@Barbara: Thanks, Barbara. I'll be doing a workshop on the Big Island in September 2011. We'll be doing lots of night photography, including Mauna Kea. You're welcome to sign up. :)

Gary, be sure to let the group have plenty of time to acclimate at the 10,000 ft visitor's center before completing the drive to the top of Mauna Kea. Even though we stopped at 10,000 ft for an hour, my husband was so sick he could not even leave the car! I wandered around with my camera taking amazing photos of the cinder cones, my husband said it looked like I was weaving everywhere. When my nephew went up there with his HS class on a field trip, he blacked out cold when leaving the bus. It certainly is an experience, but be prepared!

So beautiful.... Wow, I gotta get myself to Hawaii someday!

Gary, I was at this beach 2 weeks ago and this shot completely captures the beauty of what I saw. Please let me know if you put on any workshops in the Southern California area. I'm a big fan of your work and would love to learn from you! Great shots of Hawaii these past days/weeks!

@Ernie Sibal: Thanks, Ernie. FYI, I have two workshops coming up in the Eastern Sierra this fall, and another in Death Valley in January--that's more or less Southern California.

One day I'll get to one of your workshops, I watched your you tube video as well!

Rules...what rules? The ephemeral swirls of sand, receding waves and starburst rays from the sun all lead my eye deep into the frame to soak up the color in the clouds and the emerald water. Well done Gary.

Great color and light, Gary! You broke the "rules" alright (horizon in the middle, centered elements), but it sure does work! I'm glad you had a great experience in Hawaii.

love the pink beach and the pink in the sky! Great perspective too.

Amazing! so many pastel colors! love it.

Gorgeous! This will be my inspiration on our upcoming trip to Kauai!