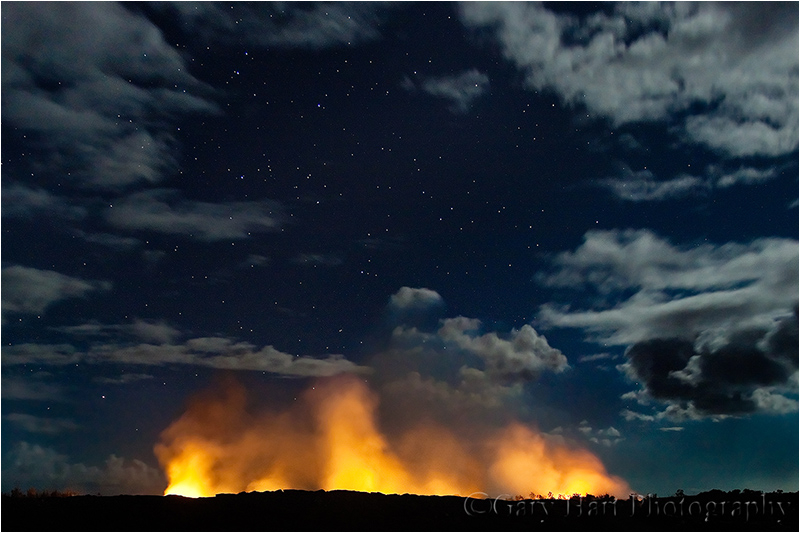 On our first night on Hawaii, Don Smith and I followed the Pahoa Kalapana Road (aka, Highway 130) to the temporary parking area hastily established about one mile from where the advancing lava had crossed the road and obliterated the previous temporary parking area. Not knowing how many people to expect (but fearing the worst), we arrived more than two hours before sunset. Our foresight was rewarded with a vantage point right at the barricade, less than 100 yards from the lava and a position that not only offered a great view, it also gave us easy access to the chatty officials and their interesting Kilauea info, anecdotes, and updates.

Waiting for for dark, I was quite content to simply monitor the lava's advance (about a foot per minute) and observe the reaction of the rapidly expanding throng of gawkers, some more impressed than others ("Grandma, why don't they just pour water on it and be done with it?"). During our wait a scruffy, young Kilauea eruption "expert" (I thought he might be a graduate student but learned later he was merely a well-informed enthusiast) started addressing the masses with Kilauea facts and history, and fielding questions--picture Jeff Goldbloom in "Jurassic Park." All in all, the atmosphere was most festive.

When night fell the real pyrotechnics began. Glowing lava churned against the dark sky, its fiery tendrils stretching skyward. Occasionally an exploding tree or shrub would issue effervescent sparks, illuminating the entire scene. I quickly switched from observer to photographer, capturing a few frames at the barricade before venturing off the road and onto the recently solidified volcanic surface deposited by the previous lava flow. In the light of a waxing gibbous moon the shiny new basalt beneath my feet came alive. From this new location I could see all the way up the mountain and follow most of the lava's path down the slope to our current point. I was close enough to the lava that the frequent subsurface methane explosions (lava-ignited gas from foliage trapped beneath previous flows) bathed me in waves of warmth.

Soon I made my way to a relatively remote location where I could just sit and appreciate what was happening before me. Wearing shorts and flip-flops, it took a bit of maneuvering to find a comfortable position on the glass-like basalt. Once I settled in I alternated between photography (my exposure was pretty consistent, so I just needed to compose and shoot) and awe.

Memories of my May visit to the Grand Canyon, photographing rock that is over a billion years old in places, put this moment in perspective: the age of rock I was sitting on could be measured in months, and the age of the rock forming before my eyes could be measured in minutes or seconds. Then my gaze drifted skyward and I tried to comprehend the formation of matter that makes the stars shine, the extraterrestrial light that originated hundreds or thousands of years ago, traveling unfathomable distances to decorate my terrestrial world that night. I don't think I've ever felt more insignificant (at least not until the next night).

Awesome work on this Gary! An incredible scene and the sky with the clouds adds another dimension to the scene and then add in the stars to top it all off! I can feel the warm Hawaiian evening in this image and then the added warmth of the lava! A fantastic capture!

Your beautiful shot drew me in, and reading the provocative information about the volcano and the relative ages of rock, still has me musing over the miracle of it all. Glad you were there capturing this, Gary.

What a great capture, i love the little shiny stars too...thanks for sharing the experience.

Wow !!! I wish I could give more than 5***** for it.... It's really a breathtaking capture ! Congratulations Gary, I think this is an experience you will never forget ! Have a nice sunday :)

Fifty stars wouldn't be enough to begin 'scoring' this splendid image, Gary. I am amazed that the stars shone that brightly in light of the intense light from the lava.

it looks like a magic story full of fantasy...but is real :) really awesome photo

Gary thiere are so many wonderul things going on here in this image and you have presented all so wonderfully. The stars, the flames, sky and clouds...composition and timing, ....but, to me, it s all topped of by your wonderful narrative above. I am always about emotion and connection and your entire posting here is filled with this. it is all so moving and so true. Thank you Gary!

Love all the sparklings things in the air... it's totally magical Gary... it looks like little shining stars in the sky... a wonderful and remarquable shot AND place. It's so enjoyable to read you, enjoying this experience and the way we relate to time compared to very old rock formations or all the billions galaxies in space... I love, most of all, your last sentence because I've shared so many times this feeling looking at nature and its incredible beauty and diversity. Thanks for sharing ALL this.

Wonderful description of your experience, Gary. The photo beautifully illustrates your words. You had good fortune on this trip.

I am in awe over this! So many wonderful elements coming together to make a breathtaking moment in time come alive! I agree with Denny- The photograph is made even more special by knowing how you connected with the scene on such a personal level. I don't know why it works, but that is when and how the magic of photography happens!

What an awesome sight and how wonderful it was to read your narrative! I had some of the same feelings at the top of the Haleakala crater during a February sunrise. Sometimes when nature speaks, we just need to be quiet and humbled.

That is just simply an amazing shot for sure! Everything just jumps right out at you!

amazing scene and beautifully captured! great light and exposure balance to get the fiery glow just right and bring stars into play as well!

what a great experience you lived and you 're words touched me as the awesome capture you did this day !!

Wow what a fantastic shot!!!

Fantastic shot Gary...A visual treat with all the different elements and a great story to help tell this unique event.

Gary; this looks like CGI ~ could be a set or background for a Star Wars episode! Beautiful and creative image; I agree with Scott that the stars / clouds / lava are all wonderfully framed to create a spectacular image.

@steve loos: I was pretty close, but not quite as close as this image implies because I cropped it a bit. If I'd have been using my 24-105 I'd have just zoomed a little tighter, but I had my Zeiss 28 prime on the camera and they were herding us out.

Your perspective, time, the rock being moments or months or years old.. is just amazing and this had to be breathtaking to behold. At a distance. So I have to ask because you made no mention and I really don't know the answer, does the lava, the volcanic activity have a smell? Is it sulphery or.. does it smell like hot rock or something?

Thanks, Kristen. You're right, it was a truly amazing experience that really must be witnessed firsthand to fully appreciate. I didn't notice a smell, but we were downwind. In fact, even though we were so close and there were trees and shrubs bursting into flames constantly, we didn't smell smoke either. And we didn't smell anything at the caldera either, but that plume you see in my star trail image is poisonous fumes, so I image there would be a smell there for anyone foolish enough to be upwind (which is why the road is closed).

Amazing photos Gary, looks like your Hawaii trip was well worth it. I'd love to go someday...