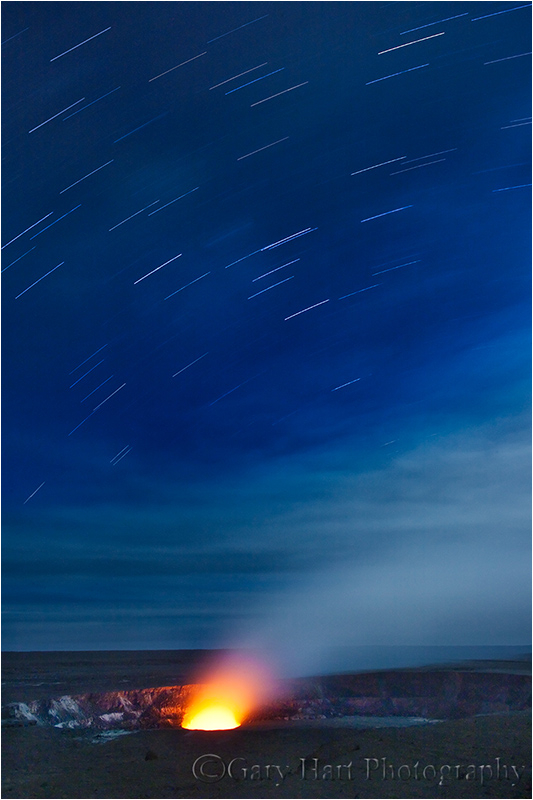 Mt. Kilauea on Hawaii's eponymous Big Island has been adding new material to the Earth's surface since 1983, a fact I've been tangentially aware of since its inception. But that knowledge, and a lifetime of tectonic fixation, did little to prepare me for the experience of witnessing an eruption firsthand.

Last weekend Don Smith and I, fresh off the completion of Don's first (of many, I hope) Kauai workshop, hopped down to Hilo hoping to catch the volcano in the act. Mother Nature is fickle, and while she's been kind enough to keep the magma churning for nearly 30 years, she moves the show around like a geological shell game, making it next to impossible to plan a viewing any more than a few days in advance.

Saturday night we were fortunate to view the leading edge of the current lava flow, where the advancing lava crosses the former Pahoa Kalapana Road, on its way to the sea. Here we got close enough to feel the lava's heat, watching it close the distance at a rate of one foot per second, photographing until authorities closed the viewing area well after dark. We were the last to leave.

Buoyed by that adventure, we jettisoned our plan to spend the final night of our trip photographing the night sky from atop 13,800 foot Mauna Kea, opting instead for a trip to Volcanoes National Park to peer directly into the eye of the beast. The sun had just set when we pulled into the parking area at the Jaggar Museum, the closest view into the caldera. In the shrinking light the churning magma's orange glow colored the plume of vapor and ash spewing from the Halema`ma`u Crater at the caldera's heart. Overhead a gibbous moon, about half full, played peek-a-boo with an assortment of puffy cumulus and translucent stratus clouds.

The glow intensified with the darkening sky and soon the cumulus clouds dissipated to reveal a host of stars dotting the darkness above; the caldera below was illuminated only by moonlight and magma. I knew it would be impossible to adequately convey the magnificence before me with a manmade contraption of metal and glass, but that didn't prevent me from trying. After a few vertical frames wide enough to include the moon, I switched to slightly tighter compositions that concentrated on the fiery crater. Moving around I tried different lenses, switching between horizontal and vertical, waiting out the frequent headlights from cars exiting the parking lot, and shaking my head at the occasional point-and-shoot flashes that wouldn't reach more than 20 feet of the roughly 2/3 mile distance to the crater (sigh).

Seeking to transcend the static shortcomings of my still camera, I decided to wrap up the evening with a 20 minute star trail exposure. I'd been photographing in fairly constant darkness for a while, so I knew the amount of light necessary to reveal foreground detail without overexposing the glowing magma chamber. I calculated that 20 minutes of exposure would add about six stops of light at my current ISO and aperture settings; to compensate I simply subtracted those six stops by dialing down my ISO to 100 and reducing my aperture to f13. The result was my only Kilauea star trail frame, my final image in Hawaii.

Exquisite night photography. I wish I could have gone with you but I'll see you and Don in Big Sur next month. I don't think we find any volcanoes however.

this is awesome, perfect

Incredible shot!!
Thanks for technical description

Perfectly done ! This must be an incredible place Gary, so beautiful ! Have a nice day :)

Wow! this is incredible!

Gary this is one of the best images I have ever viewed! I am speechless (which if you ask my friends is a big deal!) Your concept was perfectly executed with a beautiful result.

So great...so now, you saw your volcano! Happy we are! you've just shared an amaizing picture!!!

What a magnificent and thrilling story and just a breathtaking image. The fact that this particular one was the only star trail exposure that you got MUST make this all the moe special for you as well.. It certainly is special to sit here and look at it - wow what a beautiful Piece! Thank you Gary, glad you made it to the Big Island

Sorry for the repeat here but what I really like about this image is the cool way that the stars and the heat /flame/plume are all seeming to track at the same curvature and in the same direction - how cool is that!

I love how you have changed the appearance of this photo
and made it look like the fire came from the sky also.
Very beautiful picture.

I could have easily made that shot.

@Rick Trautner: I have no doubt, Rick.

superb long exposure and very clever composition! it looks like the crater is spitting the stars out and then they travel through the sky! well taken!

Gary, I could NOT have easily made that shot! I love how you framed this, and the glow in the foreground perfectly balances the cool dark blue of the sky. Another beautiful night sky from you. Lovely ending for what I am sure was a great trip for you and Don.

What a wonderful shot, that sky is just awesome!

Your rending of the volcano is much more dramatic than mine - funny - this too was my last shot before calling it for the night (and leaving such a spectacular display). This one was taken about 6 years ago and I think the flow was a bit further out than this one - I remember hiking a good deal over some hot moon like terrain before we got to the spot.

@Jason Kravitz: Thanks, Jason. You got the ultimate shot: lava pouring into the sea. When Don and I were there it wasn't happening yet, but they thought it could be soon. We were pretty please, nonetheless. I think Don will be posting one of the lava flow in a few days.

Congratulations on your spotlight Gary... it's well deserved :)

It's really beautiful. The orange/blue color combo and the star trails arc rhyming the white plume from the volcano is stunning. Thanks for sharing!

bur please, Gary, I'm sure that you don't catch just one image...As volcano's fan, may I ask you to show us more?....Because this is something look without ever growing tired...

@KriKridesign: Thanks, Christine. This is the only star trail image I have, but I will post one or two more night shots of the crater, and maybe one or two of the lava flow from the night before. Also, check Don's blog because I know he's planning to put a lava flow image up soon. Also, I'm pretty sure I'll be doing a volcanoes workshop on Hawaii in September 2011--maybe you could sign up and see it first hand. :)

1293 seconds. Just.. wow. and the effect is most worth it. This is beautiful!

What a great framing and exposure to get these startrails balanced with foreground!

hi. I am an amatur astronomer from Iran.your photo blog is vere nice.
please visit my photoblog
good like