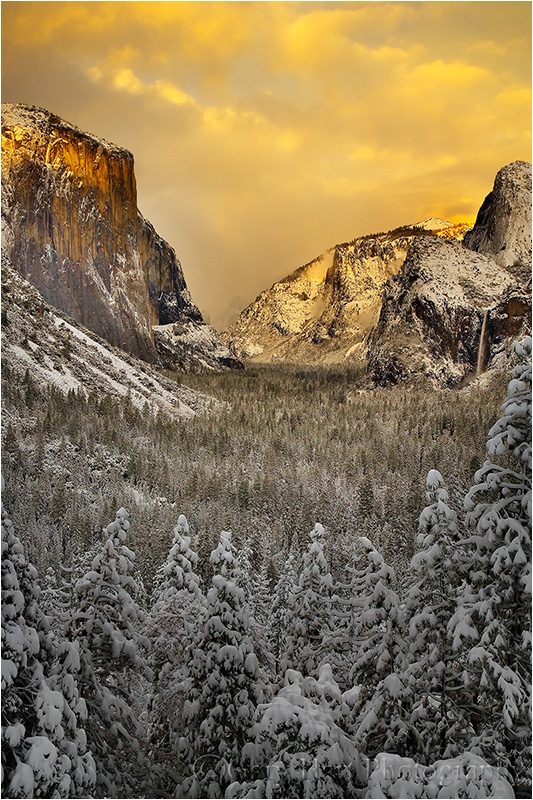 This image of Yosemite Valley dipped in white was captured about 15 minutes after the image in my previous post. As you can see, in that short span the scene has warmed considerably, with the blue hues of dense overcast replaced by the gold tones of thinning clouds painted with warm sunlight. Such is the nature of the weather and light in Yosemite in general, and at Tunnel View in particular. One minute you're beneath the clouds, the next minute the weather has engulfed you, then just as suddenly you're above it.

On this March evening Don Smith and I stood side by side with fingers crossed, staring into snow falling so thick that the foreground trees were merely dark shapes. Every couple of minutes one of us would check our watch, wary of the approaching twilight, then glance over a shoulder for signs of clearing in the west. Would it arrive on time?

The clearing started about 40 minutes before sunrise, with a slight but obvious brightening in the western sky, followed shortly thereafter by a lifting of the clouds that revealed a world bathed in white. Soon the dark outline of El Capitan loomed. When the sunlight broke through, washing the distant granite in waves of amber, we uncrossed our fingers and started clicking. And clicking, and clicking, and clicking....

In magic moments like this I establish a rhythm, varying my compositions between wide and tight, horizontal and vertical. The light changes fast, so I also constantly monitor my exposure. I used to play baseball and I liken the experience that evening to one I would sometimes get in a game, when the whole world would just slow down and I'd feel like I'm the master of the world. This (delusion) is accompanied by a euphoria that landscape photographers live for, but like athletics, I can't really allow my to experience it in the moment. Suffice to say, the drive home that night was a fog of smiles and butterflies.

I'm asked occasionally about my vertical composition of a scene that unfolds horizontally for most people. Without doing the math, I'd say that 2/3 of my Tunnel View images are vertical. This isn't conscious, but I suspect it's because I rarely photograph here unless there's something interesting going on in the foreground or sky, and when that's the case I opt for vertical to emphasize one or the other. Honestly, I find the view left of El Capitan and right of Cathedral Rocks suffers in comparison to the El Capitan / Half Dome /Bridalveil Fall triumvirate. By going vertical I can concentrate on the beautiful heart of the scene and still feature the fabulous foreground or sky that compelled me to shoot in the first place. (My March 3 image is an example of the same basic composition except with the sky as the emphasis, plus more thoughts on vertical Tunnel View compositions.)

This is gorgeous color, Gary! I love the golden light.

Wow- what a change- It is so amazing how quickly and completely Mother Nature can change her mind!

What an faboulous moment you had the chance to assist!...

What an extraordinary light ! So beautiful !!! Have a nice sunday Gary :)

This is just too beautiful

Good heavens, these just keep getting better and better Gary. I owe a debt of grattitude especially to you and Don Smith, Scott Schilling, and Jack Larson whose words and images remind me to try and be more cognizent of perspective and aspect ratio as I take a picture. I have a LONG ways to go there. Now we get to the sheer aesthetic beauty of these images - that's something I can relate to very easily but not duplicate. Thanks for all of these things. Denny

Amazing how the light changes from minute to minute. I hope I can get to that Zen place when shooting in these situations!

Gary, I really like the golden color on the granite and in the sky - great capture.

superb photo! the golden glow high above is just something else! i think the vertical orientation here has given a lot of height and stature to this already impressive landscape!

Love the golden sky, how amazing what 15 minutes time does, isn't it??? Wonderful shot!

There's gold in them thar hills! (Sorry....couldn't resist) Great contrast of the cool, icy glaze on the trees in foreground with the warm, glowing sky; sweetened by the ember glow of the rocky cliffs. Love this version.

I like the warm sky in this one. A classic view!

Gary,
You need to compile these wonderful words and beautiful images into a book. In your spare time of course. :-)
Kelly

Oh my goodness! This is very beautiful. The colour of the sky is simply wonderful! Fantastic textures and lighting as well. What else can I say: I LOVE IT!!! Thanks so much for the info.
5 stars for sure

As the previous a fantastic image. Its interting to see the same place under diferent tones and the warm tones are great in this image.