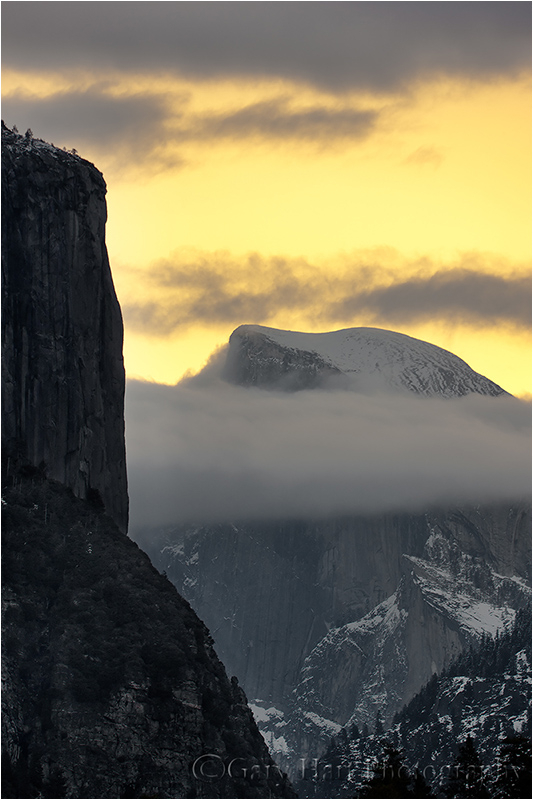 This is a winter sunrise scene from the Half Dome vista point on Big Oak Flat Road in Yosemite. The perspective here is similar to Tunnel View (right across the Merced River Canyon), though the vista isn't nearly as popular, probably because it lacks Tunnel View's majestic breadth and the view of Yosemite Valley (including Bridalveil Fall). But the one feature I prefer about this perspective is the close alignment of El Capitan and Half Dome. Nothing says "Yosemite" like the outline of these one-of-a-kind granite monoliths, and their alignment here makes this location ideal for long telephoto shots that compress both into a single frame.

Is this how this scene looked to my eye? Absolutely not. If you were to look the series of images I took this morning you'd see that the entire view was a spectacular convergence of granite, clouds, and light. But capturing the entire scene flattened and shrunk everything, stunting the drama.

I've said it before, but maybe this would be a good time repeat: Successful photography requires a thorough understanding of how the camera's vision differs from yours, and complete control over that difference. In fact, artistic photography rarely succeeds by simply duplicating reality; rather, it must deliver insights that expand viewers' perception of reality. There are many ways to achieve this photographically; for me it must be accomplished in my camera through composition, depth, and exposure, and not in the computer through creative post-processing (more on that in a bit).

In this case I tried to identify the most compelling aspects of the scene, and the best way to convey them. Surely the shapes of El Capitan and Half Dome were key, so I went to 400mm (and even cropped a bit more in post-processing) to fill the frame and compress the depth. A vertical composition enabled me to include more sky. Exposure was tricky, as I needed to hold the color in the sky, yet retain detail in Half Dome, without blowing out the clouds that made this moment special. An easier option would have been to exaggerate the color by underexposing the sky and rendering the foreground in silhouette. Instead I chose an exposure dark enough to hold the color yet bright enough to retain sufficient detail in the shadows to recover later in Photoshop (I never said I don't use Photoshop at all).

As it turned out, with a little dodging and burning, the exposure of Half Dome, the sky, and the clouds is pretty close to what I saw that morning. On the other hand, that left El Capitan pretty dark, which doesn't really bother me because I'm more interested in using its shape to frame the left side of the scene.

In hindsight I'm reminded how key Ansel Adams' "visualization" approach (basing capture decisions on a vision of the ultimate print) is to my process. As most no doubt know, Adams was a notorious post-processer who scoffed at the idea of merely recording "reality." With the advent of digital capture I'm able to make decisions about a scene with the understanding of what I'll be able to achieve in post-processing. I don't do anything creative in Photoshop, but I do appreciate the ability to recover and balance light the camera had difficulty with.

The composition is great, I really like the shadows and lights here ! Beautiful !
Have a nice weekend Gary :)

There is a similarity today, between your shot and Don's. I mistook his Elephant Back for Half Dome in the thumbnail size. I like how you captured the density of the low cloud against the Princess of Yosemite!

You tickled my fancy by explaining your use of the dodge and burn tools; I used them yesterday in a shot I took mid-day along a tree-covered country road. The Florida light spoiled the shot due to its extreme brightness filtering through the dense trees. My burn tool went to work and voila! :D

My hope and prayer is to see this place one day in person. Your photo makes me want this all the more.

What an awesome scenery photo!

This is what makes you an artist, Gary, not merely a "photographer"!!! It is an artist that can visualize the finished print and work almost backwards to make the choices that you need in order to accomplish what you visualize. Fantastic lesson, and insight!

this is just lovely..

Ohhh...what a lovely image of this AWESOME place..the composition, tones and light are fantastic!

superb photo with very well balanced highlights and shadows indeed! i like your write-up too as it sums up the essence of post processing software for me and i agree with you way of thinking!

Well said sir. I totally agree. I am not technically "there" yet anyway, but I still feel that any bloke can "photoshop the dickens" out of something to "make it good"...it takes an altogether different talent, I believe,to FEEL the emotion and power of a scene and then convey THAT feeling (or compel the viewer to do so) in a similar way. That is Art, the former is technlogical embellishment.

Yosemite never ceases to amaze me! You could spend a lifetime out there and always get unbelievable imagery! Another wonderful picture! Thanks, Gary!