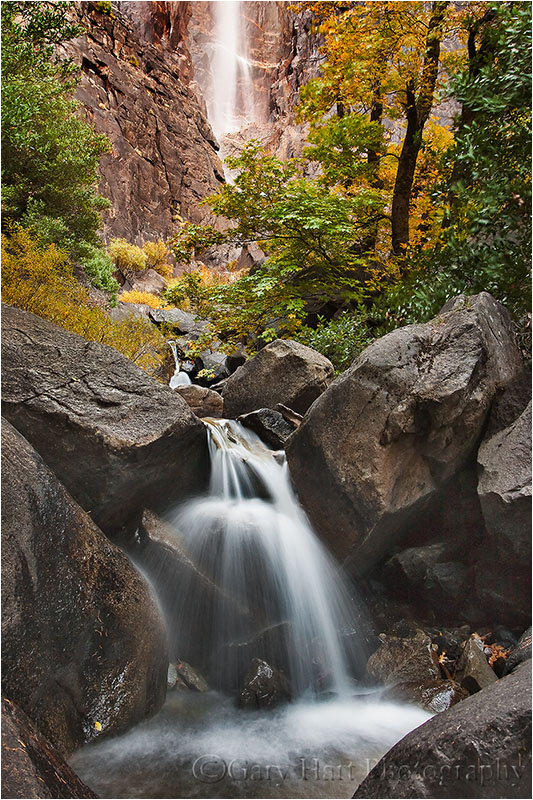 Posted by Gary Hart (California, United States) on 27 May 2010 in Landscape & Rural and Portfolio.

So many of my favorite images aren't an entire scene, but rather a window that focuses on the aspect that most appeals to me, and only implies the larger scene. For example, this scene I found last fall while scrambling among the rocks at the base of Bridalveil Fall: From my vantage point I could see the entire fall, but expanding the frame to include it meant shrinking the foreground and adding distracting elements in addition to the fall. So I left enough of the fall for my viewer to imagine the rest of it, and concentrated my composition on the part of the scene I found most interesting, the color-shrouded cascade beneath the fall.

In hindsight I realize that what I did here was unconsciously apply the photographic equivalent of Hemingway's iceberg analogy, which says 7/8 of what an effective writer knows doesn't make onto the page. It's a loose analogy, but I think it applies to photography in the sense that omitting select parts of a scene allows viewers (like readers) to fill in blanks that are outside the frame (or off the page). A good photographer takes advantage of the viewer's powerful imagination, an imagination that will exaggerate the majesty of an implied waterfall without diluting that vision with distractions that would invariably mar the actual scene.

Fantastic image Gary! There is so much detail that it was a joy to roam around the image and discover several smaller photographs within.

This is just an extraordinary image...You can't imagine how much I've learned looking to your image and reading carrefully your exif datas...You, Don and Scott are my photograph teachers...I don't know how to thank you....

Beautiful with amaizing colors/tones and with a fantastic lead line.

Superb composition, I really like the milky effect on the cascade and the autumn colors !
Have a nice day Gary :)

The source of the lower falls' magic is shown and as you stated, minimally implied - wonderful image!

such a beautiful shot

I never thought of it that was, but I really do imagine the rest of the falls in my mind. This one is so quietly beautiful, and I would love to sit here and look at it all day... Ahhhhhh....

WOW! I love the "force" of the water in the bottom part of the fall. Very well done

superb composition with the "double" waterfall! the one in the foreground gets the attention instantly before the one behind completes the scene superbly! there is great balance to the two parts of the shot here and nicely controlled light and exposure!

Gary, an excellent point that you make and I often have to remind myself not to try and get the whole scene! A small simple composition is often much more effective! You have a talent for composing a small portion of the overall scene and yet give me a feeling of what is beyond. I like your balance and water flow on this - the colors are great too!

Have a fantastic Memorial Day Weekend!

Gary this is a nice take on Bridal Veil falls I had to do a double take on the image to realize what fall you were shooting. I came back from a spring trip a few weeks and combined it with a Tahoe run for about 3 days also. Unfortunately my plans of hitting lakes near Tahoe such as Heather and Susie and Aloha were dashed with 4 to 6 feet of snow covering up any signs of a trail, but I did manage to get to a few lakes and wow there were run off waterfalls everywhere.
Yosemite didn't offer up as nice of weather but I had some decent materials of Nevada Falls, Fern springs, and a hike to the base of Ribbon Falls with shorter hikes half way to Sentinel and Illouhette Falls so I'll atleast have some materials to ponder over. Your still cranking out some great materials and it must be nice being around students with high energy and enthusiasm levels. I would really like to do a workshop one day but still have some basic questions as to how to set up arrangements in a hotel for the students, any possible fees for groups getting in the gates and conferencing situations in the evenings for the students off of a laptop where we would review the students materials on the day and discuss possible goals and accomplishments for the following day. Any feedback I can get from you concerning these situations would be great. Once again terrific image and I enjoy continuing to view your work.
raymond Marlow

@raymond marlow: Thanks, Ray. I handle the lodging for all of my workshops (it's included in the price). The training we do during the day (when the light's poor) includes image review--evenings are generally free, unless we're doing night photography. Feel free to contact me directly for specific workshop questions.

I really like your photo, and carefully read your articles . I have learned a lot from you. I noticed that us use ISO 400 for some of your photos, including this one. Can you tell me why? Especially this one, I thought it should use lower ISO in order to get slow shot speed.

@YYDB: Thanks. I generally shoot at ISO 100 or 200 unless I'm in a situation where a long shutter speed won't work. In the case of this image, there was a breeze so I went to ISO 400 to slow my shutter, then waited for brief lulls in the breeze. For moonlight photography I'll go to ISO 400 or 800 to avoid star movement.

Gary - this is one of my favorite images from your portfolio (and that is saying alot). Very well done. Great composition.