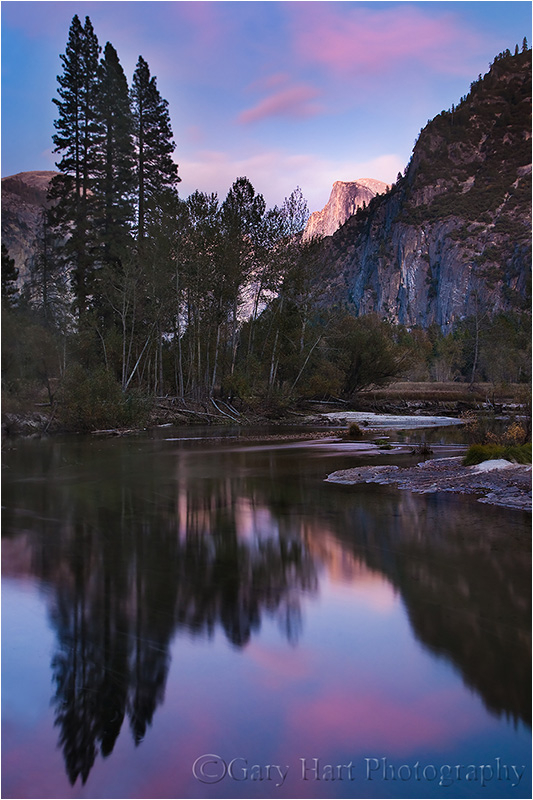 Half Dome and Sunset Reflection, Yosemite

Posted by Gary Hart (California, United States) on 21 May 2010 in Landscape & Rural and Portfolio.

I spend most of my day in Yosemite with one eye on the sky trying to figure out where I want to be for sunset. There are a lot of variables to consider, but if it looks like there's going to be nice color in the sky, I want to be at one of my reflection locations. The reflection possibilities vary from season to season--in spring, when the water's high, the reflection locations are entirely different than they are in fall, when the water's low.

On the first evening of last year's second Yosemite Fall Color workshop, with nice clouds in the eastern sky and a fairly open sky to the west (ideal conditions for sunset color in Yosemite), I guided my group to this spot on the Merced River. I like sunsets here because it has everything I look for: a view of Half Dome, nice reflection possibilities (in the fall), and lots of foreground and compositional options. It's also a little off the beaten path, making it less frequently photographed than the popular tourist vistas.

We arrived about 30 minutes early, well before things started getting interesting. Inexperienced photographers often wait for the color and light before they start looking for shots, so I encouraged everyone to immediately start considering composition possibilities they could return to as soon as the light improved. And because inexperienced photographers also often have a hard time anticipating and visualizing, I tried to give them an idea of what to plan for.

The group scattered, but it didn't really matter where anyone ended up because soon the entire sky was painted pink. When the sunset was over and we headed to dinner the excitement was unanimous. I had particular fun later, during the workshop image review and in images shared after the workshop, see the great variety of ways people found to capture that magnificent sky. Photography is an inexact science; in Yosemite in particular you never know just what you're going to encounter or whether the conditions will play out exactly as you expect (hope), but it sure is great when things falls into place like this.

I write a lot about my workshops, but it occurs to me that many people might not have a clear picture of what a photo workshop is. Basically a photo workshop is a diverse group of enthusiastic photographers sharing their common interest in a world class photo location (like Yosemite) under the leadership of a pro photographer (like me) who knows the area well enough to get them in the right places at the right times.

Each workshop leader has his or her own format, but in my workshops (like many others) we're up before sunrise and out past sunset. I also try to include at least one night photography shoot. Each day also includes a couple of hours of training, either photography (composition, exposure and metering, and so on), digital workflow, and/or image review. The training comes in the middle of the day when the light's poor. Needless to say, even with two or three hours of free time for rest (or whatever), everyone's pretty wiped out by the time we finish.

I'm in my sixth year of offering photo workshops, and I'm amazed by how much fun we have. I pretty much expected that people would be happy with their pictures and what they learned (or I'd soon have been out of business), but what I hadn't counted on was how much everyone bonds by the end of the workshop. The dynamic of each group is quite different, but I can honestly say I haven't had a group yet that hasn't been a blast. It's also wonderful to see all the friendships my workshops have started, with people staying in touch long after the workshop is over, re-connecting in subsequent workshops, and sometimes even getting together later on their own. With many customers returning multiple times, I've also made many great new friends during these workshops. So what started out as simply a plan for me to be able to earn a living with my photography has turned into a huge source of pleasure in my life. Who woulda thunk it?

The reflections in this capture are so great ! And of course the location is... breathtaking ! Beautiful !

The reflection is so 'soft' and absolutely beautiful, nearly overshadowing Half Dome herself.

This one is so quietly beautiful, Gary! I love the bit of movement in the water, and the way the light really focuses my attention on Half Dome!

Gary,
Love the reflection! I agree with you the workshop is wonderful i would highly recommend Gary's workshop to anyone who has not been to Yosemite. I learned a lot made friends and came home with beautiful images it just doesn't get much better than that. Thank you so much!
Kelly

Gary; the framing, light and landscape are beautiful. Getting up early is worth it for these views!!!

Magnificent light. I love the reflections.

I really enjoy your writing along with the beautiful photographs.

Location is obviously very important, but there are a lot of people leading workshops and tours in some spectacular locations. You and Don are accessible in the field and create an atmosphere that allows the group to feel comfortable and to work from their own skill level. The classroom sessions were supportive and helpful as well. I had a great time in Big Sur, and will definitely be a repeat customer!

@Julie Brown: Thanks, Julie. We do our best. :) (And it helps having great people in the groups.)

wonderful composition! the reflection adds nice depths and the clarity of the evening and beautiful colours make for a nice dreamy mood!