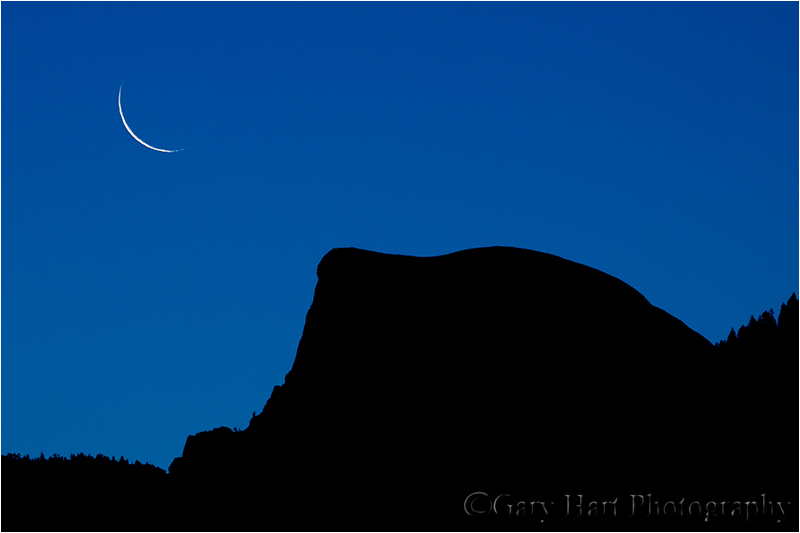 Posted by Gary Hart (California, United States) on 15 May 2010 in Landscape & Rural and Portfolio.

Tuesday afternoon I made a last minute decision to photograph the waning crescent moon rising above Half Dome Wednesday morning. I arrived in Yosemite at about 10 p.m., confirmed that there was no suitable lodging available in Yosemite Valley ($100 for an unheated tent cabin in Curry Village is not suitable in my book) and spent a cozy albeit rather uncomfortable night in the back of my Santa Fe. I rose at 4 a.m. and was in place at Tunnel View by 4:30.

With all the moonrise/set information available today, I expected to find a horde of photographers set up and waiting for this rare opportunity to photograph the convergence of these two distinctly beautiful and complementary natural shapes. Instead I arrived to find only one other photographer there, and when I asked him if he was there for the moonrise he just shrugged and shook his head, "Moonrise?"

The moon appeared right on schedule. I photographed it using two cameras side-by-side, my 50D with the 100-400 and my 1DSIII with the 70-200. Suffice to say I finished the morning with a variety of pictures that please me, a very successful trip.

But despite successful photography, I'm afraid that is not what I'll remember this trip for. You see, on my drive up my car's battery warning light flashed a couple of times and I made a mental note to get the car into the shop when I got home (if this were a movie, a few notes of ominous music would play here). And then as I entered Yosemite Valley, a ranger pulled me over to tell me a taillight was out--but it came on when I hit the brakes. Weird. Shortly thereafter my seatbelt warning light started blinking (more ominous music, a little louder and more persistent--never a good sign) and I found myself watching the dash more than the road. I soon parked in a secluded parking area and spread out the sleeping bag in the back, hoping a night's rest would banish the electrical gremlins.

The next morning with crossed fingers I turned the key in the ignition, but it started right up (cheerful pianos and flutes here). But within minutes the warning lights resumed, more agitated than ever (the ominous music returns). With one eye on the road and the other on the dash I made it to Tunnel View in time from my moonrise. But as I drove away and pointed for home, the dashboard lights started what I can only describe as freaking out, and for the first time things actually stopped working (here come the screeching violins), one after the other, like a row of toppling dominos. First the cruise control failed, then the speedometer needle started bouncing like a pogo stick, and suddenly I had no dash lights at all. Finally, about 10 miles down the road (the music has reached a crescendo), the car just quit.

Turns out this isn't a very good movie unless you like two-hour tow truck rides and hotel rooms in Fresno. I finally made it home late last night with a new alternator and more than a few doubts that the source of a bad alternator on a two-and-a-half year-old car has been identified. Thank God for the Hyundai warranty and AAA.

Lovely simplicity and dramatic division of the frame.

Beautiful shot ! The silhouettes of the rocks against the blue of the night... great ! Also the moon is really special in this capture ! Love it :) Have a nice weekend Gary :)

Gary; we have smart phones, but you have a smart car ~ knows exactly where to break down! This is a beautiful image. I very much like the even deep blue color the sky offsetting the black silhouette of half dome, and the sharp crescent (only 2.7% of the sunlit portion is visible.) Very nice.

So sorry to hear about your car woes!! Your last sentence made it bearable.

Excellent colors! What a beautiful silhouette!

Wow .....I bet every time you look at this beautiful photo you think of the ordeal you went through...it was well worth it! :)

Fascinating photograph. The kind that makes you fall in love with photography.

I'm certainly happy you got those fabulous shots, Gary, because the rest of the story is not as pretty. Hope the car makes a recovery. In the meantime, you can sit in front of your computer and enjoy your fabulous images ;-).

Excellent colors! What a beautiful silhouette!
tanx for shar

The account of your car problems was hilarious--surely not funny at the time. THank heavens you got this shot-beautiful colors and the silhouette makes me think of a person lying on his/her back peacefully eyeing the new moon.

Well, first, as Judy from Florida noted - your photo is "a winner." Secondly, kind spirits still had to be watching over you because they allowed you to get those wonderful images before the main gremlinitus began. But I am sure you know that . Your work is so inspirational, Gary. And the story reminds me of some of the issues i used to have with my old 74 VW bus. Glad you got back ok. -

eventful trip in more ways than one! glad you got home alright in the end! and it looks like the photos were well worth it! love the strongly shaped silhouette here - there is almost a sinister feel to its dark shape hovering over the viewer and the crescent moon is just a perfect companion - very spooky and haunting mood!

Alternator? Yes a nightmarish story like when we went to the Chicago Auto Show and a car that shouldn't have thought any different suddenly didn't recognize the chip in the key. It thought we were stealing it and it locked itself up tight! It would have been several hundred dollars to tow it home but luckily a friend told us just where to kick it. Seriously. There's a control box just above the gas pedal and if you give it a few good snaps with the tip of your toe, boom boom boom.. it starts. So yes we got home but after an hour of Oh no! Glad you got home too. Sometimes.. the shots we take like this.. are ones we have to sit back and say yeah.. I worked for that! Good for you!