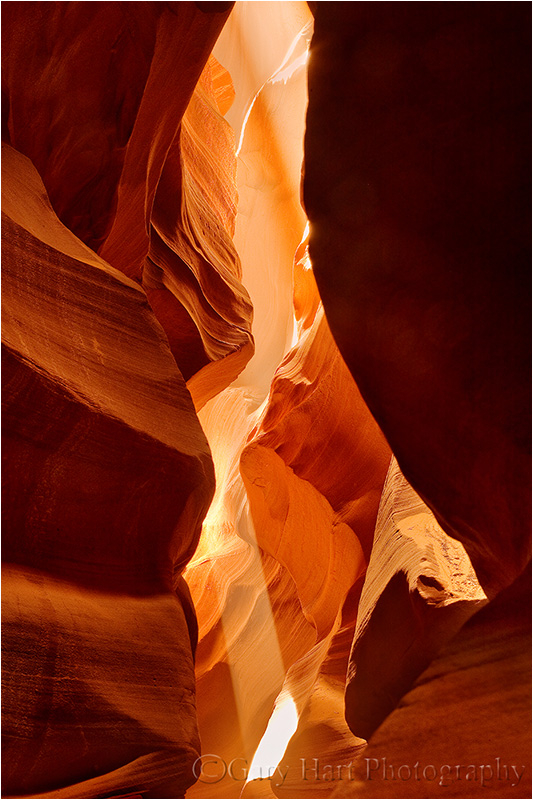 From Above, Upper Antelope Canyon

Posted by Gary Hart (California, United States) on 9 May 2010 in Landscape & Rural and Portfolio.

I spent last week co-leading Don Smith's Northern Arizona workshop, where we led a great group of photographers to the Grand Canyon, Page (Antelope Canyon, Stud Horse Point, Horseshoe Bend), and Sedona. The days were long, the scenery was fantastic (duh), and though the daily blue skies were a challenge, the sunlight was ideal for Antelope Canyon, which proved a rousing success for all.

The first thing that strikes me when I see Upper Antelope Canyon images is the sense of peace that completely belies the midday frenzy there. Photographers and tourists jostling for position, Navajo guides shouting commands, and a constant shower of dust from above--imagine someone throwing dirt at you as you try to photograph on a New York subway at rush hour—with a tripod.

The show in Upper Antelope Canyon is run by Navajo guides who don't allow workshop leaders to teach in the canyon. Having done this for a couple of years, before starting Don and I were able to prepare our group for the experience, which goes something like this: "Wait, wait, wait, okay go, go, go! Set up here! No, here! Here! Half of you shoot from your knees, the other half set up behind them! Now! Hurry! Hurry! Are you done yet? Okay move!" All the while you're trying to figure out which urgent voice belongs to your guide while metering and composing whatever's available from your one square foot of real estate, praying nobody fires a flash, kicks your tripod, or walks into your frame during the four- to twenty-second exposures necessary in there. And don't even think about changing lenses lest you end up with a sensor that resembles a windshield after an August vacation in Texas.

The ephemeral beams are as fickle as they are mesmerizing--at one location Don and I held back while our group photographed a laser-like shaft that seemed no wider than a pencil, only to have it vanish by the time our turn came up. So why do we do it? Well, if this picture (and those of others) doesn't convince you, I won't even try to sell you on the idea of attempting Antelope Canyon. But if you do try it, read on for some suggestions.

First, don't even think about leaving your tripod--there's just not enough light in the canyons to photograph hand-held without making significant ISO and/or aperture compromises. Both Upper and Lower Antelope Canyons are beautiful, but if your goal is the beams you want Upper Antelope Canyon. Schedule well in advance a midday tour in the months when the sun's high in the sky--the tour companies know when the time's best for the day of your visit. And to get the beams, gear up for the circus I described above, and prepare to strike out if it's cloudy. Fortunately, both Upper and Lower Antelope Canyon are beautiful with or without beams--the beam-less shots may not be as spectacular, but I don't think they're any less beautiful.

Try to schedule a photo tour--it's more money, but you'll end up paired with other photographers with similar objectives (and nobody in your group who will fire a flash during your exposure). A photo group is also more likely to have a guide who will fight for your opportunity to get the shot (the guides are constantly battling for position for their group). And (at least with our tour company) you'll get another hour to wander the canyon in relative peace after the beams are gone and most of the tourists have cleared out.

Dust is a huge problem (I wore my vest and had to clean every lens in my pockets, even though none came out in the canyon), so make your lens choice before entering the canyon, and be prepared to stick with it. For your first visit I think the Canon 24-105 on a full frame is an ideal range (of course your choice will be determined by your camera's crop factor and the lenses it accepts). If you think you'll want to change lenses, carry a second body instead. If you're concerned about dust on your body and lens, invest in a rain hood for your camera. And a bulb blower or can of compressed air will be your best friend as you wait for the next shot.

As for settings, my mantra is simplify, simplify, simplify. I want lots of depth field and just peg my aperture at f16. My ISO is 200 or 400 (not much different from default ISO 100, and the extra speed helps in the frantic conditions). That means the only thing I'm adjusting as I expose is my shutter speed. I spot meter (in manual mode) on the bright rock or hot sand just outside the beam and dial my shutter speed until the exposure indicator is in the +1 to + 2 range. I shoot, check my histogram, and adjust my shutter speed accordingly. Blinking highlights where the beam hits the rock and/or sand are inevitable in a properly exposed image--I consider the exposure a success if the rest of the frame (including the beam itself) is within the histogram.

While you wait for your turn at a beam, look for opportunities up high, above everybody's head. Not only is this a great way to get your exposure set, there are some really nice and usually overlooked (i.e., unique) shots up there. That's exactly how I came up with today's image, and a couple more of my favorites from this year's visit.

When you're done in the canyon, set aside some quality time with your gear and a can of compressed air.

A miraculous shot that I appreciate even more after your amusing description of the conditions.
You brave guys...no wonder you get the good shots. :-)

You play with the ligth, it's wonderful!

It fantastic!! the light is ...magnificent!!

If only I could get there, but I think I'd be so awestruck I'd forget all of your lesson (above). :D
This is a winning shot, Gary!

Wow, that is quite a process. Sounds nerve-wracking. Beautiful texture and color, Gary. Is it the dust that makes the light beam visible?

@Julie Brown: Hi Julie. Yes, sunlight illuminates the fine dust particles scattered in the air. In addition to the dust kicked up by all the people, it was quite windy outside, so dust was blowing into the canyon. Sometimes the guides throw dust into a beam to make it stand out even more, but this beam was up toward the ceiling of the canyon, so this is simply ambient dust.

excellent capture - the play of light, shadows, colours and textures in this place keeps amazing and fascinating me every time! superb photo! and thanks for the guide as well - don't know if i will ever make it that far but if i do, i will keep your suggestions in mind...

Hi Gary, Anticipating your images from this trip, I knew I would not be disappointed.This is marvelous. After reading about what one has to go through to get these images makes them even more fantastic. Thank you so much for "taking us there" through your images. Denny J

Outstanding photography here! One would never guessed you had all of the elements of dust and dirt to deal with! The lighting and colors are just awesome!

Gary; sounds like you and Don had a great trip and your description is hilarious! Having seen photographers elbow to elbow in the desert - while lightning strikes behind them I can only imagine what this spot is like. Very beautiful image; have you a black and white version?

Amaizing shapes created by the light and shadows. This should be a fantatstic place to shot.

Hey sweet shot, Gary! After last year's hectic visit I had to have my 24-120mm rebuilt and cleaned!

For me the attraction of this place is the wonderful flowing shapes and the orange glow! I was here several years ago- before I understood how to work my camera, (my camera was still working me!) so I would love to go back one of these days!

I visited Lower Antelope Canyon over the Thanksgiving weekend and for the benefit of those who haven't yet visited the Antelope Canyons, the horror story with guided tours described above doesn't yet exist across the street at Lower Antelope Canyon. You don't need a guide, you can travel at your own pace (although they're apparently enforcing the two-hour time limit that has long been honored in the breach), and you can setup in any place you wish so long as you leave room for people to get by you. Of course, the hike is quite a bit more strenuous (I'll bet you could push somebody through Upper Antelope Canyon in a wheelchair!) and the light is less "beamy" off season, but there are still many great photos to be had there.