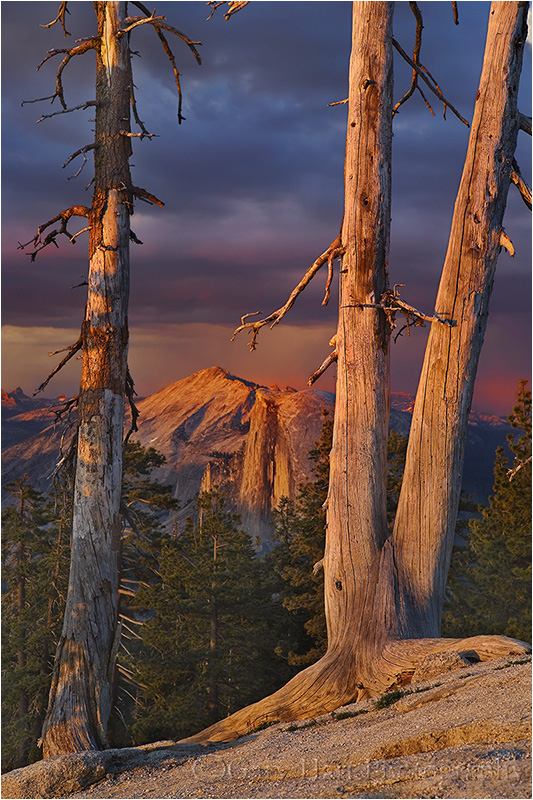 Trees at Sunset, Half Dome from Sentinel Dome

In my previous blog I talked about Sentinel Dome as a sunrise location, but it’s also pretty fantastic at sunset. With views in all directions, often the biggest problem photographing from Sentinel Dome at sunset is simply deciding which way to point your lens. To the west I can watch the sun disappear beneath the horizon, with Cathedral Rocks and El Capitan in the foreground. And while shooting toward the setting sun can be a difficult exposure, success is often rewarded with brilliant color.

But concentrating too much on the sky to the west risks missing the last light on Half Dome behind me. Half Dome’s elevation above everything between it and the setting sun means it gets light long after Yosemite Valley is in full shade. So with a clear western horizon, and clouds to catch the light and reflect sunset color behind Half Dome, the view east is usually my preference.

On this summer afternoon, thunderstorms darkened the sky behind Half Dome. The western horizon was clear, so I knew the ingredients were in place for great color in the east, and that’s where I decided to focus my attention. The key to success in these situations is finding my composition before the magic begins. I wandered Sentinel Dome’s flank in search of something for my foreground, landing finally in front of these dead trees.

I made a lot of images that evening. Shortly after I captured this image the sky lit with crimson so vivid that everything from the trees, to the rocks, to the hairs on my arm buzzed with red—it was as if somebody had grabbed nature’s saturation slider and yanked it all the way to the right. I understand people’s (often justified) skepticism about “aggressive” post-processing, but it’s experiences like this sunset on Sentinel Dome that convince me most people forget how vivid color can be in nature.

Very beautiful composition with amaizing tones. The details in this one, namely in the tress, are also great.

Absolutely beautiful.. the colours and the composition is really great..

That is a view of Half Dome we don't often see! Great composition and color, Gary.

Wonderful post treatment Gary, spectacular colors and landscape. Could be perfect for a movie poster. The Return Of Indiana Jones : The Magic Mountain and The Lost Treasure.

I hardly knew photography so beautiful existed like this. It looks like a priceless painting, the best.

The light and the tones are really superb !

This is just lovely, Gary. The lighting on the trees and the mountains between them is wonderful. I know what you mean - when the light gets perfect like this, you hardly know where to look!

It is beautiful, simply beautiful!

Great light and crazy beautiful colors hanging around for your lens! Beautiful shot!

almost a fantasy like scenery - wonderful composition with radiant warm colour tones and superb level of detail all around! amazing place and photo!

Nice job of wandering to find the right spot! The old trees in the foreground make for a superb composition.

Beautiful as only you can capture true nature!