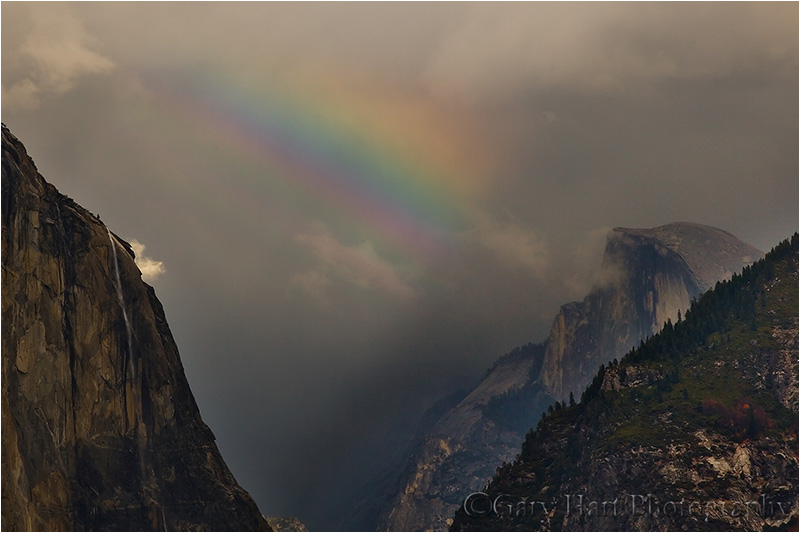 When I was a kid my dad took me to the top of Yosemite's Sentinel Dome during an electrical storm. (Sentinel Dome is a granite dome that rises high above the surrounding terrain, pretty much the last place you'd want to be when there's lightning around.) But the story gets worse: Cameras in those days were fully manual, requiring a separate meter and two coordinated hands to manage efficiently. And weather sealing hadn't even achieved fantasy status. So what does a determined photographer do to keep his equipment dry in the rain? Simple--he asks his young son to hold the umbrella, to hold it high above his head.

Dad was not a stupid man, far from it; rather, he was a serious amateur photographer who really wanted to add a picture of lightning striking Half Dome to his Kodak carousel. And, as I'm sure most serious photographers will verify, this need to get the shot sometimes trumps common sense.

So anyway, my brief career as a human lightning rod was a failure and Dad didn't get his lightning shot (nor, more significantly, did it get us). We left Sentinel Dome with wet clothes but dry equipment, heading next to Glacier Point a couple of miles down the road, where we wandered the various vista points in a light rain. By then dad had suppressed his disappointment and shifted to tourist mode, content with souvenirs and family snapshots. But when the clouds suddenly parted to paint a vivid, arcing rainbow across the face of Half Dome, he snapped to action with an enthusiasm a child rarely sees in a parent. I'll never forget how my father came alive when that rainbow appeared, and then later when the slides came back from the lab and he saw what he'd captured, and later still when he hung a large, framed print of the rainbow on the living room wall. He never tired of telling people the story of its capture. (To see the picture, read "My Father's Rainbow".)

While I have vague memories of my father and his camera that pre-date that rainy afternoon, I think that's the first association I make to photography as an emotional catalyst rather then merely something to record events. I understand now the disappointment he must have felt when he missed his lightning opportunity, and the euphoria when the rainbow appeared.

A thunderstorm had drenched Yosemite Valley and rattled the walls for most of the afternoon; I shot for awhile then decided to wait out the heavy stuff at Tunnel View. Not wanting to push my luck, I'd sat in my car as the downpour completely obliterated the view, periodically wiping the fog from my windows to monitor the view. The rain was falling so hard that it felt like it would fall for a week when without warning the clouds opened and gifted me with this small but perfectly placed splash of color. I scrambled from the car and set up in seconds, but the break lasted just long enough for me to grab a few frames before the rain resumed.

My father passed away in 2004, but when a rainbow bursts out or the sky turns crimson, I still feel connected. I've been extremely fortunate in my years as a photographer, sometimes wondering if I witness more than my share of nature's magic. My brother, also a serious photographer, joins me on many of my trips and we like to imagine that maybe Dad has something to do with this good fortune.

That's what I call a mystical rainbow. Very nice.

Wow Gary... I saw many rainbow shots but in this one you really captured the seven different colors, not easy ! Congratulations :)

Fantastic story Gary. Thanks for sharing.

Wow! Now that must have been an awesome sight! Beautiful shot!

This beautiful splash of color is yet another documentation of the genes that flow through your body (and your brother's). I loved reading about your early 'lightening rod' experience and am happy you lived to tell of it. As for your rainbows, they are all beautiful, however this will forever be my favorite too. ♥

Awwww...Nice story Gary....your Dad may have had a hand in helping with your shot....and a very beautiful and memorable one indeed :)

Beautiful scene, and what a compelling story behind this photo, Gary. Thanks for sharing it. I think making images of nature is a spiritual journey for many of us, whether one makes a living from it or not.

A gorgeous rainbow shot made even more special with your account of early days with your father! Excellent picture and post.

superb drama captured here and even more so thanks to the story behind it - this is really an amazing view!

This is such a beautiful story Gary, that it's hard for me to comment on the photo because it pales in comparison with the feelings I have for "you the little kid" out on that rock with your dad. I have had one or two similar experiences with my kids- but as the parent, so I have no idea what they take away from them....Maybe someday I'll know :)

@Tracy: Thanks, Tracy. I think some people might be critical of my dad for jeopardizing us in that way, but as a photographer I completely understand the temporary insanity caused by the desire to "get the shot." I'm pretty sure the lightning was striking across the valley, which would have made it easy for someone not familiar with lightning and its range (which would describe most Californians) to rationalize that we were safe. I know now that we weren't, but I don't think he knew that. The other thing about that afternoon I remember was a ranger talk at Glacier Point: The ranger said, with a chuckle (as if nobody would be that foolish), "The last place you want to be during an electrical storm is Sentinel Dome."

Beautiful image with superb colors, and and amaizing story.