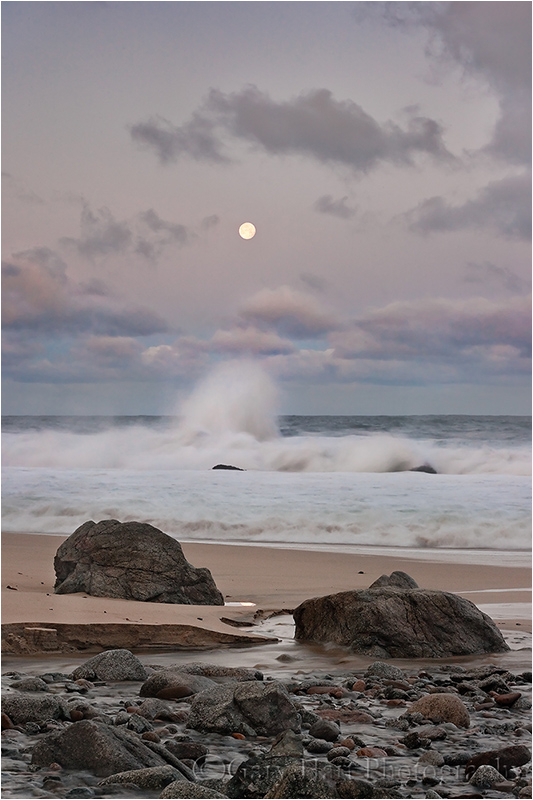 Beginning landscape photographers are often overwhelmed by the number of decisions necessary to make an image: For starters there's the technical stuff like ISO, f-stop, and shutter speed necessary to manage depth of field and motion blur. On the creative side, focal length (wide or tight), orientation (horizontal or vertical), and subject placement all must merge to create an effective composition. And of course there's the potential overlap of all these considerations, where a technical reality plays havoc with our creative options, and vice versa. The best reassurance I can offer is that all this really is easier the longer you do it: With experience, technical decisions that once required focused concentration become unconscious reflex, and creative opportunities you completely overlooked will be obvious.

Take a look at this Big Sur sunrise moonset from a couple of weeks ago. Approaching this scene, knowing I wanted to find a foreground for the moon, I moved slowly along the bank of the creek where it drained into the ocean. When I saw the moon reflected in a small pool I was pretty sure I'd found my foreground anchor. I knew that the reflection wouldn't stand out, and wouldn't even be noticed by many, but I love including little "rewards" like this for people who spend time with an image.

There's a lot going on here visually, but before I talk about my compositional choices, I'll summarize my technical decisions. My default f-stop (when everything's at infinity) is f8 or f11, but in this scene I wanted sharpness throughout the frame, so I opted for f16 (going smaller than that introduces diffraction and lens sharpness problems that I try to avoid unless absolutely necessary). A quick check with my camera's spot meter (always on) confirmed what I suspected: A single exposure that didn't blow the moon while retaining detail in the sand and foreground rocks would require a graduated neutral density filter. In this case a three-stop soft transition GND turned out to be the right call. My default ISO is 100 or 200 (varies with a camera setting I won't go into here), but I wanted a shutter speed of about a half second to blur the water just enough to reveal motion without losing all detail, and found that ISO 400 would accomplish that. (I know my camera well enough to know that noise wouldn't be too much of a problem at ISO 400.) With those decisions out of the way I went to work on my composition.

A photographer is responsible for every single element in his or her frame: subjects, complementary elements, relationships, distractions, whatever. Fortunately, landscape photographers have a secret weapon: the tripod. Without a tripod I'd have to make decisions based not just on what settings will work for the scene, but also based on what aperture/ISO combination will render the shutter speed that will eliminate (not merely minimize) camera shake. On the other hand, a tripod enables aperture and ISO decisions based entirely on the scene and conditions.

But the tripod's advantage goes far beyond eliminating camera shake. With my tripod I can start with a general composition and refine it a dimension at a time—left/right, up/down, wide/tight—pausing whenever and however long I need to evaluate my decisions and options. When I think I have the composition I want, but before clicking my shutter, I scrutinize the viewfinder (or LCD) for distractions: objects cut by, or jutting into, the sides of the frame; merged compositional elements; hot spots or incongruous objects that might draw the eye from my subject; and so on. And once I decide everything’s right and squeeze off the picture, I can stand back and review my creation on my LCD knowing the image I’m evaluating is still sitting right there on the tripod for me to tweak in whatever manner I deem necessary.

In this scene the points of interest I wanted to emphasize--rocks, (very small) moon reflection, surf, moon, clouds--were oriented vertically, so I chose a vertical composition (more a rule of thumb than a hard-and-fast rule). I started assembling the elements in my frame by centering the large foreground rocks, getting as tight as I could without trimming or crowding them. Keeping a 2/3 aspect ratio meant that my focal length was fixed by the position of the left and right sides. There was plenty of room to play with in the clouds at the top of frame, but the confusion of rocks at the bottom made even the slightest adjustment critical, so that's where I concentrated my attention. I played with that area quite a bit until I got something that didn't feel cut-off at the bottom. As I wrestled with all this the moon was dropping fast, forcing me to drop with it to maintain the reflection. Once I had the overall scene in place, I watched the surf and waited for it to explode against a large rock at the center of the frame. I captured a dozen or so images before the reflection disappeared and the color left the sky; each one was a small refinement of the previous image, and/or captured a little different wave action. I have other versions where the reflection's a bit more prominent, but I chose this version because I like the color in the sky and the crashing wave.

Great and sharp details on the rocks on the foreground. Love the angle of view as well. Makes me want to dive into the ocean. Colors are axwesome.

Wonderful composition, and the light colors are very pleasing to the eye! Great shot!

wonderful composition! perfect light balance across the frame as well with every element well illuminated and forming an important part of the overall composition! great commentary and thoughts too - i enjoy your insight into photography!

This is just stunning!!!! And I too found your detailed explanation interesting AND helpful. I have so much to learn! Great job Gary.

I appreciated hearing the work process on this lovely shot.(artistic and technical.)

I appreciate the text you've posted with this image. It shows how much care and attention goes into your work - and I've never heard anyone talk of the tripod as something that adds freedom!

I really like the image. I love the wave and the sky is beautiful. In face, I think it may have worked better without the moon in it - the moon, because it is so bright, keeps pulling at my eyes when I am trying to explore the rest of the image.

Your photos are so amazing......thank you for sharing your technique with us. You have a very generous spirit that I really do appreciate. God bless you and yours!