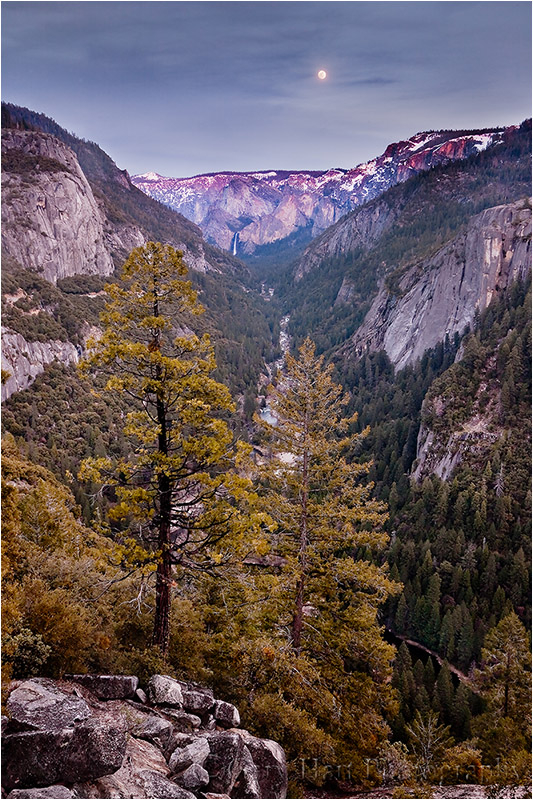 About a week and a half ago I started the first of my two Yosemite spring "Moon and Moonlight" photo workshops. In last year's version of this workshop we got pretty much everything but the moon--snow, rain, beautiful skies, and booming waterfalls made for incredible photography, but we had no moonlight and only a brief glimpse of the moon (from this very location).

Prior to this year's workshop I'd determined that the best nights for a moonrise and moonbow were the third and fourth (final) nights. I was particularly excited about the third night, as I'd calculated that, weather permitting, a 98% full moon would rise right above Bridalveil Fall just before sunset. But with a storm promised, I feared a repeat of last year. For insurance I made sure we got a moonrise and El Capitan moonlight shoot on our second night.

Despite our night-two success, it was still night three's moonrise and moonbow that I most looked forward to. But as sunset approached, so did the thin clouds in advance of the storm and I held my breath. By the time we arrived at the location the clouds had thickened, completely obscuring the horizon above Bridalveil Fall. Despite the disappointment we found plenty to shoot and I resolved to wait there until sunset.

When the chemistry in a group is good the waiting is as fun as the photography, and this was indeed a great group. As we waited I kept my eye on a small gap in the clouds and calculated that if it didn't close the moon would actually rise into the opening right around sunset. My experience with clouds in Yosemite is that they change fast, and knowing that more clouds were on the way, I held out little hope that our opening would hold.

Despite the revelry I advised my group to plan their compositions as we waited so they could be ready when things start to happen, and it was gratifying to see that my advice had been heeded. When the moon suddenly emerged about five minutes before sunset everyone sprang into action and we got about fifteen minutes of great shooting before the Merced River Canyon was lost to the shadows.

Thrilled with the moonrise, and pessimistic about the thickening clouds overhead, I considered pulling the plug on the moonbow shoot, but finally decided to give it a shot anyway. Fortune smiled on us that night as our little window in the sky persisted long enough for everyone to photograph a colorful moonbow in the mist at the base of Yosemite Fall. I love it when things work out.

As many of you know, I'm not a fan of blending multiple images in Photoshop or with HDR (high dynamic range) software. In high dynamic range scenes like this I opt for the "old fashioned" graduated neutral density filter solution to equalize the light in the sky and foreground, then do a little dodging and burning in post processing to hide the GND transition. In this case I stacked my Singh-Ray three-stop soft and two-stop hard filters to hold back the sky and moon, placing the transition just beneath the ridge top. I moved the filters up and down slightly during the exposure to further disguise the transition.

I composed this wide and vertical to include a foreground to add depth to the frame, and to allow the Merced River Canyon to lead the eye directly to Bridalveil Fall and the rising moon. Of course going this wide makes the moon quite small, but as this image demonstrates, the moon doesn't need to be large to carry a lot of visual weight in the frame. Here I think it serves as a perfect accent to a scene that was already quite nice.

This is just a wonderful shot! Makes me wish I was there! Beautiful composition!

WOW! What a breathtaking scene!

great use of filters - i am a big fan of using filters as well! this scene is very nicely balanced and composed and the moon is superb - just that little extra touch to complete this scene - nice work yet again!

Lovely composition, Gary. The colors on the ridge are outstanding. Nice moon too-you are the moon master!

Big rock candy mountain back there. Love it!

@Self-Indulgence: Thanks, Kristen. (And I love the "big rock candy mountain" reference, which also happens to be the name of a book by my favorite author.)

Gary, great shot. We were within ten feet of each other and got such different interpretations. See my blog post of April 28 for my version.