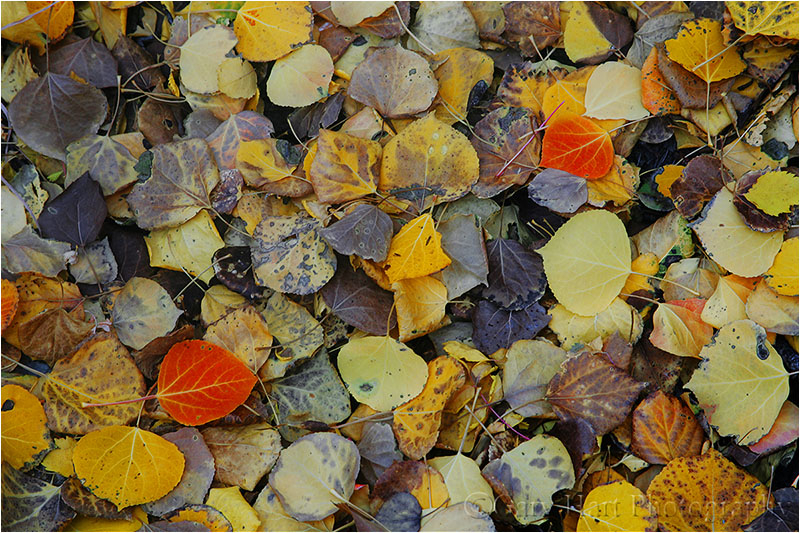 When you're surrounded by beautiful scenery, it's easy to overlook the small details that make a scene special. But there's no substitute for the pleasure that comes from spending a little time in a scene, identifying its intricacies, and creating an image that conveys this meaning to others. Capturing these intricacies is often the most rewarding aspect of photography, because they're almost always uniquely reflective your own vision.

People frequently look at this image and ask if I arranged these red leaves. The answer is an emphatic, No! I usually go on to remind them that you can draw a straight line between any two objects on the face of the earth (or any other planet, as far as I know). In fact, the only arranging I do to an image is myself, and in that regard I'm quite aggressive. In the field I look for individual elements to isolate in the frame; or better yet, groups of elements. But finding my subjects is not the end of the job--without properly positioning the subjects in the frame, the scene is likely to fail. But don't move the subjects, move yourself. In this scene I circled the leaves slowly, with my camera to my eye, until the frame felt balanced. And while the leaves ended up at the "rule of thirds" points, that wasn't a conscious decision on my part, but rather confirmation that the rule of thirds is indeed valid (sometimes).

What's the rule of thirds? Very simply, imagine a tic-tac-toe grid on your frame; important linear elements (like the horizon) should be on the lines, and important point objects (like these leaves) should be at or near the intersections. I hesitate to even bring this up because the ROT is one of most frequent photography "rules" to be broken effectively. I think its real value is to help remind beginners not to bullseye subjects, or crowd them against the edges. In reality I could probably show about as many successful images that break the ROT as follow it. My own rule to apply to the ROT is that it is always trumped by my intuition, my sense for what what balances a frame.

A beautiful natural carpet ! I'm always amazed how they (the fallen leaves) always fall randomly and beautifully. A perfect fall in fact.

The 2 red leaves really draw in the eye! Nice shot! I became a fan of yours on Facebook! Nice work you do:)

Very pleasing image, Gary. Thanks for sharing your thoughts on your compositional process. It just goes to show that ROT validates your intuition-it doesn't dictate it. BTW, I have been to Rock Creek, and it is stunning!

I love this! I am always fascinated by tiny details, and I love the treasure hunt of finding something like this! The placement of everything in the frame really draws my eye around to all the elements, especially the two red leaves!

PS- A wonderful piece of advice I got when first starting to take photographs: The best piece of equipment you have is your feet! (Maybe it was you who said it!?)

a wonderful mosaic like composition that is full of fine detail plenty of interest to keep going back to it...

Gary another great image. I am reading Elliot Porters Natures Chaos and am amazed at the beauty of these simple, complex images.

I've got a similar shot I want to upload this weeken. Mine isn't as nice as yours though :) Lovely colours and textures. Bravo!

I love the way you "see" the world and all the possibilities for interpretation and expression.

Nice fallen compo. I like the small details on it, and the brown color pallete