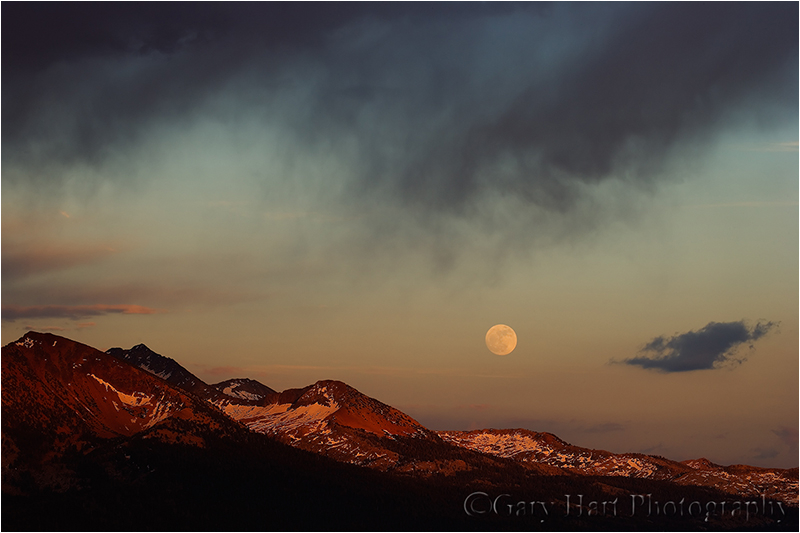 Successful photographers photograph in reverse. While most people will see a pretty scene and contrive a composition with little consideration of the light, a good photographer identifies the best light and crafts a composition that highlights it. I can cite this approach as responsible for many of my favorite images. And when the light's not right on a particular scene I want to photograph, I figure out when the light will be good and return then. Of course this approach applies to more than just light--clouds and the moon can also trump a scene. And sometimes you get all three.

Sentinel Dome's 360 panorama makes it a great place to be at sunset, but its high elevation makes it inaccessible by car for seven months of the year. Three springs ago I headed up Glacier Point Road shortly after it had opened, itching to get back up to Sentinel Dome. I'd timed my trip to coincide with the full moon, but when I arrived atop the dome I thought I might be shut out by afternoon clouds that had accumulated along the Sierra crest. Fortunately, as the day's heat diminished so did the clouds, allowing the moon to appear right on schedule.

While the popular view (and my usual target) from Sentinel Dome includes some combination of Cathedral Rocks, El Capitan, Yosemite Falls, Half Dome, and Nevada Fall, that evening my interest was drawn east and south, where the rising moon hung suspended between rock and cloud. With a telephoto lens I framed the scene to make the moon the focal point, using the peaks and clouds as framing elements. I underexposed slightly to eliminate distractions in the shadows and emphasize the warm sunset light skimming the peaks.

Very cool with the clouds in the upper frame

perfect timing on the light !

Gary....incredible shot....the clouds are awesome in the shot and that moon makes you feel like it's right there!

Magical! I love the rose tones in the sky and mountains- this is quite a majestic scene :)

fantastic photo! excellent composition with superb bronze tones of the mountains and haunting clouds over the top - the moon is just a perfect icing on the cake here - superb stuff!

I like the underexposure - a moody feel with the dark clouds overhead.

Sentinel dome is one of my favorite walks and views; so close to the road yet many don't know its there. Very nice image Gary. I would love to sit up there with your group and shoot star trails some night!

Beautiful composition. I like the image ambience and the moo is superb.

That's an interesting approach that I have actually started to use as of late so that I can.. boost my photo opportunities. Sometimes I go out for something in particular and other times I go out to just find things. It's the finding things that leads to light studies and.. well maybe that won't shoot well in this light however.. that over there will. Then I recompose. Might even get good at it one day ;) It looks like here you got the moon's blessing.. so my question is.. the light on the mountain tops, that's receding sun isn't it?

A nice red ang big moon (I like it like that). A superb panorama. Thanks for sharing.

wow what a shot It is fabulous

I didn't know about your book - I'll definitely be getting a copy!

Hi Gary, do allow me to pay compliments to your work.
Your landscapes exude a sense of serenity and peace. I start picturing a figure, painstakingly setting up the tripod, filters and what nots and waiting patiently for that right moment to pull that remote release, and going back to repeat the process time and again to get that one perfect shot.
It is a process I would never go through as I'm more inclined towards photographing people.
What I'm trying to say is, your landscapes are a testimony to patience, and careful planning, and relentless determination, and I hope people see pass beauty alone.
Thanks for transporting me to places I've never been before. I'll set my imagination free to roam each of these locations.

Gary this has fantastic light and great details! I just read your article in OP - I enjoyed it and thought you did a great job! Thanks for the tips and have a great weekend!

You used the available light with a great photographic ability to produce such a nice photo! Thank you for sharing the info with us!