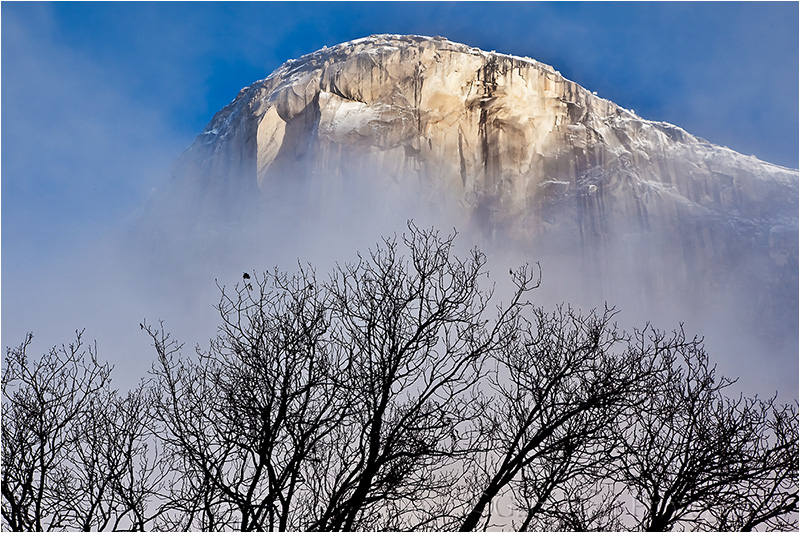 Sometimes the shots come to you, sometimes you have to make them. And sometimes it's both. What I mean is, when you're in Yosemite Valley as a storm clears, the shots are everywhere. In fact, the beauty is so overwhelming it will numb your creativity if you're not careful.

This image from last week in Yosemite reflects one of those "both" situations when I must consciously force myself to look beyond the obvious and identify the elements that most reflect the beauty before me. Think of it as distilling the essence of a scene. The result isn't always an image that drops jaws from across the room, but I think this is often the best way to create something with staying power, an image that sustains the viewer far beyond the initial impression. I sometimes wonder whether this explains my preference for "fine art" images that can be hung on a wall, rather than stock, which must grab on the first view (of course achieving both is even better).

The best way for me to find a scene's essence is to put on a telephoto and slowly move the view around the scene until something grabs me. I generally start wide and move tighter, and of course I try both horizontal and vertical. Much like a divining rod that somehow hones in on unseen energy to guides its "driver" to water, I can't tell you what I'm looking for in my viewfinder but I know when I've found it because my camera just seems to stop.

So on this morning the view up from El Capitan Bridge sent me straight to my 70-200. Starting at 70mm, I didn't have to zoom much before this composition stopped me. I'm generally not a fan of cutting primary elements down the middle like this, but (in hindsight) I think I liked the complementary curves of the exposed crown of El Capitan and the crown of the tree. Exposure was easy because it was the tree's shape, not its detail, that attracted me, enabling me to use an exposure dark enough to ensure ensured that I didn't blow the clouds and lose the blue in the sky.

This entire day turned out to be great for photography. My March 18 image was taken just a few minutes later, and while the storm cleared out within a couple of hours, Yosemite Valley had clouds clinging to its walls throughout the day. I was guiding a class from the Sacramento area for the day, some of whom had never been to Yosemite, always a treat. I draw vicarious pleasure from showing Yosemite to others who have never seen it, but on this day the pleasure wasn't all vicarious.

What an extraordinary capture... congratulations again Gary, this is fantastic ! Have a nice sunday :)

Wow, so impressive with the mist coming up and hidding part of it. Looks like an ice monster pushing his head up. Great title. Appropriate.

Yes, the complimentary curves got my attention, along with the perfect backdrop for the tree branches. The peak of El Capitan is breathtaking!

I love the way he rises from the mist, yet the tree is between you and the monolith. Bravo!

whoa! this is not short of magical! the way the mountain just hovers over the scene is breathtaking - i think this is great work here with 75mm focal length as the compression that zoom creates makes El Capitan even more imposing...

A wonderful evocative title for this image. I love the unusual view of the trees paired at this angle with the mountain above the clouds.

Perhaps you should forward this image to Tracy's instructor. Oh wait, you don't have a human connection to go with it so it has no staying power! Honestly, I would love to hear his reaction. How does one tire of seeing such a beautiful scene? Well done.

Nice image Gary. Looks like something I might want to use in my Scenes and Seasons section in Valley Views

Just like you always say in the workshops, patience always seems to pay off, and the results can be amazing.

How could anyone's heart not stop when looking at this!??? Honestly, I never used to seek out landscapes- I thought they were too difficult, and I didn't have an "eye" for them. But a few years ago before I was to make a trip to Yosemite, I found your website, and I was so moved that my photography has taken a whole new direction....I am inspired and touched by your work.

@Tracy: Thanks so much, Tracy. I always appreciate your heartfelt words of support. When I look at your images now it's hard to believe that at one time you thought you didn't have an eye for landscapes. It's nice to hear that I have some role in that.

Gary - I think this is my all-time favourite photograph from you. It is absolutely magnificent.

Absolutely beautiful Gary! Btw, I just read your "shoot the moon" article in the April issue of Outdoor Photographer. Outstanding article and images!

It would almost seem like a landform that large could not be hidden in a fog though I suppose in the early days of flight a lot of pilots figured that out, briefly, and fast. I like the rising from the mist look. [to create something with staying power, an image that sustains the viewer far beyond the initial impression] <-spectacular and what I hope to achieve one day. Maybe I'll begin with prints. Not stock though.. I don't think that suits me either.