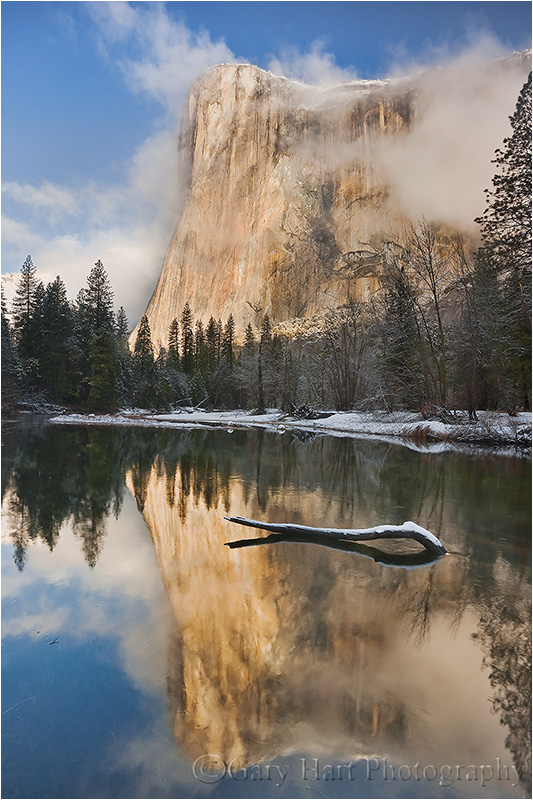 Last week, after two productive days photographing poppies, I went to bed on the eve of my final day in Yosemite to the steady hum of rain. The next morning dawned damp and gray, but the rain had stopped. Instead, a thin veneer of fresh snow dusted the trees, and without even thinking about breakfast I headed to Tunnel View to survey the valley and plan my morning. By the time I arrived a patch of sunlight had burned a hole in the clouds above Cathedral Rocks and hints blue sky mingled with the clouds in the west. I knew the show there would soon be spectacular, but I've photographed many clearing storms from Tunnel View and wanted something different.

Without leaving my car I headed back down into the valley, stopping first at El Capitan Bridge, arriving just before the clouds capping El Capitan started lifting. I photographed there for about 15 minutes, long enough to see El Capitan's nose go from obscure shadow to distinct outline to fully exposed granite. Before the clouds parted completely to reveal the rest of El Cap I packed up and made a beeline for nearby Cathedral Beach. In the short time it took to drive a half mile most of El Capitan had emerged from the clouds and I rushed to grab my gear. The road to the beach was closed so I set out on foot, running most of the quarter mile to the river.

I found two other photographers at the west end of the beach and rather than compete with them for real estate I trudged through the brush and crunchy snow to a clearing just downstream. There I was able to set up in solitude and move around at will. I was quite pleased to find a snow covered snag that allowed me to add a little depth to the foreground.

The beauty of photographing a Yosemite clearing storm is that no matter where you are, something spectacular is happening. One of my February workshops had a couple of similar mornings and I moved my group around a little faster than I normally do because I wanted to show them as much as possible before the show was over. But this morning I was teaching a class--we were scheduled to meet at 10, so with no time to explore I knew Cathedral Beach was where I'd be until I had to leave.

Without rushing, I worked the scene, wringing out as many compositions as possible. I started wide, using my 17-40 for vertical and horizontal shots that include El Capitan and the reflection. Next I went tighter, using my 24-105 to capture either all of El Capitan, all of the reflection, or some of each. Finally I switched to my 70-200 and started picking out individual elements: the swirling clouds and brilliant highlights on El Capitan's vertical edge, the snow covered snag in the river, and so on.

Given that knowledge, and the fact that I generally want whatever's in my foreground to be in focus (even if it means the background is slightly soft), I had to find a compromise focus point to ensure that both the reflection and the snag were in focus. With an extremely wide focal length and small aperture I was confident I could get the entire scene acceptably sharp if I focused carefully.

There are different approaches to maximizing focus range, such as relatively accurate but awkward hyperfocal charts, and rule-of-thumb guidelines like focusing a third of the way into the frame. Both have merit, and many excellent photographers employ them, but I prefer a more seat-of-the-pants approach that relies on my own experience and understanding of focus range. I generally find the closest subject I want in focus--in this case the snag--and then focus on something a little behind it.

Here I focused on the shoreline closest to where I stood, knowing that a wide shot at f16 gave me a pretty large margin for error. Is this an approach I'd recommend for others? Perhaps, though it takes trial and error to perfect. I encourage you to familiarize yourself with hyperfocal distances--you don't need to memorize them, but a basic understanding of the relationship between f-stops, focal lengths, and focus distance is invaluable for decisions like this.

Lovely mirror, Gary. Gee, you could have moved the stick! (kidding!) So still and beautiful. I'd love to be there enjoying the quiet.

I make a wish today...I will go once to Yosemite...

The light is spectacular and the composition equal to it Gary! The time that you took to compose this made the difference - good job running and getting set up in time! The snag in the river with the touch of snow on it really has a lot of weight in the foreground and my eye keeps going back to it! It has been a great year for clouds and light.

Like a giant standing still here for years and centuries, fascinated by the landscape... the rock with its textures, almost looks like waterwalls enlighted by the sun... it's really a beautiful setting.

nice pic. i'll be there next week.

What a beautiful picture! The reflection and touch of snow are just awesome!

You have done Ansel proud!

Such a beauty! Love your capture of the reflection in the water, with that tree branch in the water with snow on it. Nicely shot.

amazing photo and place! composition is perfect with the reflections adding extra strength and depth to the scene! superbly done!

YOUSA! This would be my Yosemite image of a lifetime, had I taken it. Just magical. Eloquent, I believe is the word I'm looking for.

Your attention to detail, and your thoughtfulness are always evident in your words- and your passion for nature is evident in your images! This is no exception. It is great to read about how you go about working a scene, and also great that you share your technical knowledge. The issue of where to focus is one that I struggle with! AND Wonderful article in Outdoor Photographer!

That branch in the water is a really great element to this shot. Really it would be like a mirror image if not for that and that draws the eye in. I like how you did this.

An absolute favorite of mine.