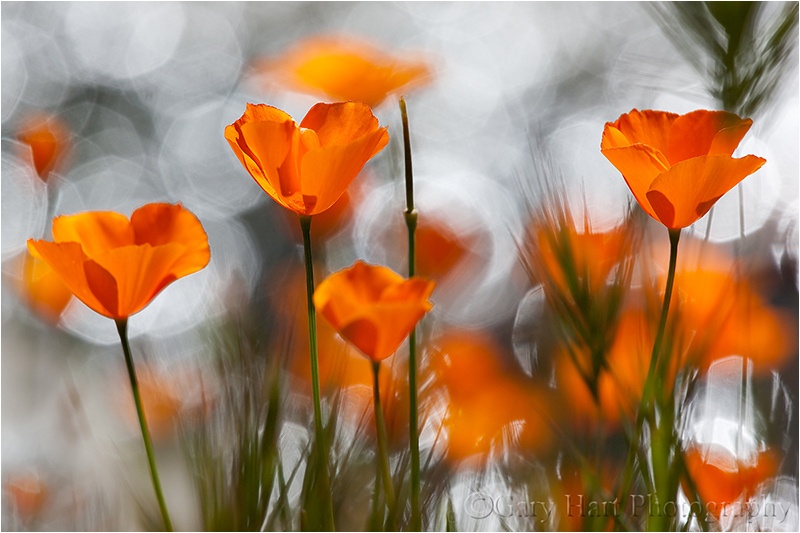 Whenever I guide people through Yosemite the subject of Ansel Adams comes up (go figure). Everybody has an opinion, and while most appreciate Adams’ gifts, there are a few who don’t seem to get it. So for those people I have a few words.

I suspect that failure to appreciate Ansel Adams’ genius lies in an inability to see the world beyond a limited frame of reference. Like most (all?) photographers, not every Ansel Adams shutter click resulted in a masterpiece, but unlike most photographers, Adams was attempting things that had never been done. Rather than merely duplicate others before him, (like all great photographers) Ansel Adams pioneered vision and techniques that are routine today. Criticizing Adams for compositions that are simple or cliché by today’s standards would be like criticizing Lewis and Clark for taking three years to do what we all know can be done in one week.

So what does the master of monochrome landscapes have to do with a colorful poppy close-up? I thought you’d never ask. Even more than timeless images and exquisite prints, Ansel Adams’ greatest legacy is the revelation that photographers are not limited to a literal view of the world. With every exposure Adams visualized the ultimate print, and how it would differ from what he saw with his eye. So with a doff of the cap to Ansel Adams, what I captured here is nothing like what my eye saw, but rather the product of understanding what my camera is capable of, and how to make it happen.

I was in Yosemite for three days last week, the first two of which were spent conducting a private tour. On Thursday we had sunshine and blue skies, beautiful for being outside, but not so much for photography. The early morning and late afternoon sweet light hours we spent in the park, but during the harsh midday light we headed down to my favorite wildflower location in the Merced River Canyon, just west of Yosemite. The wildflower bloom hadn’t peaked, but the poppies were nevertheless quite nice.

One reason I love photographing poppies is that I can find shots regardless of the light. In full light conditions like this I spot-meter on the brightest part of the poppy, setting the exposure to somewhere between middle tone and 2/3 stops over (in other words, slightly underexposed). This retains the poppies’ vivid orange and turns the shadows black. I usually limit my depth of field to turn everything in the background into a blur.

Here my goal was poppies in full sunlight isolated against a rushing tributary creek. I had to sprawl in the weeds to juxtapose the poppies against the sparkling water. To focus closer and shrink my depth of field, I added an extension tube to my 70-200 lens. While my eyes resolved every flower, splash, and ripple, I chose an aperture that would render the foreground poppies sharp, the background poppies as smudges of color, and each sparkle of water as a dancing bubble of light.

(The next day I was back in Yosemite photographing fresh snowfall and a clearing storm, an Ansel Adams staple.)

Victor A from United States

Great shot. I love the way the poppies stand out against the background. The background gives the picture a "dreamy" feeling.

Beautiful composition and a superbe light, almost a painting.

What a lovely one, full of colors, it's fresh and wow, a pure delight. DOF and focus are perfect. Orange glows on my screen !

absolutly perfect...love it so much...

Gary - this is just too beautiful for words! Thanks again for all the supporting information. And a great video too!

This is wonderful Gary! Even though I would never have been able to tell that the background was water, you have managed to capture the sparkly quality of water dancing in the background. We are talking in school about what makes a memorable image- and sometimes it is showing something in a way that we have not seen before, and you have done that brilliantly in this image!

Fantastic. Masterful. You've beautifully achieved an image that could be seen to come from the heart as well as the eye. The sparkle is there, the blur, the crisp edges and warm color. And it has emotional value. Bravo !

You know, I think this is one of the most beautiful creative shots I've ever seen of poppies. The ones in the foreground just jump right off the page! Absolutely fantastic Gary, I give you five stars on this one!!!

The flowers just pop at you while the background keeps you interested, very nice shot! Simple, you complicated!

I have taken a lot of poppy pics, and let me just say this one is incredibly impressive. Wonderful walkthru of your thinking process. Really appreciate this. A special image.

A 5 for each poppy. This photo is colorful yet dreamy, your dof is perfect [I'm sure you know that] in my eyes. I think what you achieved her whether it was different from what you went for or not, was a kind of perfection reticent of people like "Ansel" yet not reflective of his actual work. This is purely you and spectacular!

@Self-Indulgence: Thanks, Kristen. Ansel Adams can't be duplicated, but we can still learn from his example.

Amazing poppies. I really love what you did there and the feeling your picture creates.
Thank you Gary

Very lovely. This picture is so alive, I almost expect to see the poppies move in the wind.

this is a perfect composition and use of DOF and also knowing where to focus in this situation! the two sharpest poppies just stand out so well - the lighting is excellent as well - it brings out their vivid colours superbly! the sparkles in the background complete this frame very well - they almost give nice glowing halos that emphasise each flower on their own...

Stunning. Thank you for the explanation of how you took it.

LOVE this image, Gary! Just perfect. Makes me wanna get an extension tube for sure. Just a wonderful shot!

Beautiful take on a common subject. I love the poppies, too, and this is now one of my favorite poppy images! Makes me want to hunt some down...

Gary; fantastic image - the water backdrop is just great. I very much appreciate what you say about not having a limited point of reference. I am reading an Elliot Porters Natures Chaos; page after page of beautiful images of things we walk by and never notice but for the lack of seeing. I heard Adams say in an interview the camera can not capture an abstract image, as there is nothing abstract taken from nature - you can only extract an image.

ps; why do we all like in the weeds to photograph poppys, , , there has to be a better way!

@steve loos: It's gotta be because poppies look so great backlit, and the only way to shoot them backlit is to get underneath. But yeah, I'd be all for anything that keeps me on my feet. :)

Superb. I like the way you look the poppies and your images about them are fantastic.

Awesome photo Gary! Love it so much. Thanks for all the beautiful photos.

An outstanding image, and an excellent "workshop"Thank you for sharing in such detail, so many people keep their "secrets" to themselves!

Wow.... its wonderful. I love the color.

This is fantastic. Love this orange saturation and the blur spotlike background

This is a beautiful 'painting'. 5stars. Thank you for explaining how you did it. I prefer these types of images within your portfolio, more than the landscapes, 'tho there are a few of those that I like...just a small handful! ^)^