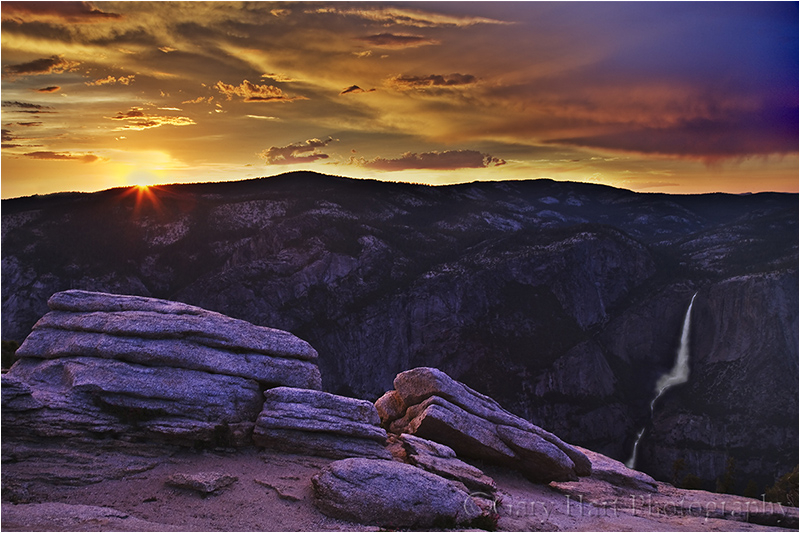 In a place where the spectacular is commonplace, Sentinel Dome stands out. At 8,000 feet Sentinel Dome rises high above Yosemite Valley, rewarding anyone who makes the one mile trek with a 360 degree visual buffet. From its summit, rotating 360 degrees clockwise from west-to-east you can savor Cathedral Rocks, El Capitan, Yosemite Falls, North Dome, Tenaya Canyon, Half Dome, and Nevada Fall , Mt. Starr King, the Sierra crest (and a host of peaks to numerous to name), the San Joaquin Valley, and even Mt Diablo (in the San Francisco Bay Area) if the conditions are right.

With its unobstructed view of the eastern horizon, Sentinel Dome may just be the best (easily accessible) place in Yosemite to photograph sunrise. But it's also a great sunset spot, and it's where I happened to be on this early summer evening a couple of years ago. When I arrived, about an hour before sunset, the sky was a flat gray, with terrain to match. But on the western horizon was a gap in the clouds that offered an unobstructed view of blue sky beyond. I knew before the sun set it needed to pass through the gap (duh), and when it did it could (fingers crossed) illuminate the entire sky.

I used the time until sunset to evaluate my composition options, ready my graduated neutral density filters, and anticipate my exposure settings. As I prepared, a thin haze formed on the horizon, a potential problem if it thickened enough to obscure the sun, a potential benefit if it remained thin and cut the sunlight slightly. The fact is, all the anticipation and preparation in the world won't guarantee success; at best it will merely improve your odds of success.

But since that stuff's beyond my control, I continued trying to improve my odds. I knew when the sun popped from beneath the clouds, and again just before it disappeared behind the horizon, I'd have an opportunity for a sunburst (possible when photographing a bright point of light with a small aperture--I like f16 or smaller). Like many overused photographic techniques, sunbursts images risk being cliché, but sometimes they're simply the best way to handle compositions that include the sun. To reduce the dynamic range between the sky and the shadowed Yosemite Valley, I decided to stack two graduated neutral density filters to remove five stops of light from the bright sky. (In post-processing I would dodge and burn a little to smooth the transition.)

Fortune smiled on me that evening, as the clouds remained translucent enough to allow the sunlight to set the sky ablaze all the way to the eastern horizon. The magenta hue in the granite is reflected from the sky above and behind me. The color intensified further after the sun disappeared, but I liked the sunburst (cliché or not) and decided to go with this version.

Another beautiful shot, the sky is amazing and the addition of the waterfall really is cool!

That s always a pleasure to see your photo, Congratulation again

Marvelous colors... it's so magic !

Very beautiful image. I like the composition, but the sky is amaizing.

Stellar image, one of my favorites of yours.

Amazing shot and love the processing! I like the purple shadowed areas :)

@Sandy Weston: Thanks, Sandy. Not too much processing here--I dodged the shadows a bit, but I wanted them dark. And with five stops of GND above the horizon line I had to dodge and burn a bit to hide the transition. I also added a slight wiggle in curves to bump the contrast. The magenta cast is the sky color reflected by the granite. In general I think the best processing is the least processing.

I'm constantly amazed at the images that you're able to capture. I can only hope to emulate a small portion your vision and skill as a photographer. For me, this is a truly inspirational image.

a stunning composition and extremely well controlled and balanced light indeed! i like the starburst - it really gives the entire scene some sparkle and and an added hook for the eyes to latch onto.

@Catherine Chambers: Sentinel Dome is at 8,000 feet, about 4,000 feet above the valley floor. It's not particularly precarious; while the slope is quite steep (you definitely feel the last 200 yards in your lungs), it's not so steep that you can't walk up (nothing like the hike to Half Dome), and the top is flat. I've been coming here since I was a kid, and a couple of years ago my mom hiked up here.

Your rocks rule here! I mean that liquidly golden sky and that half star of sun is beautiful too but something about the texture and light on the rocks, that pale purple glow has touched the rock fancier in me :)