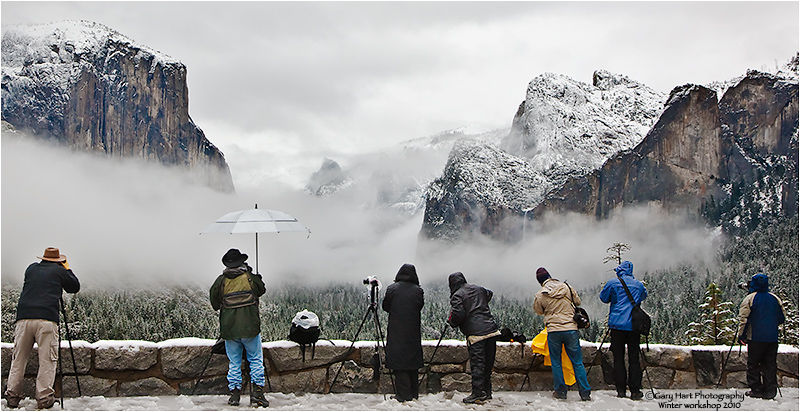 This was the final morning of a workshop filled with incredible photography. The night of our first day we went to sleep knowing it was snowing in Yosemite Valley and that we'd have a great chance to capture a clearing storm. But by the time we arrived at Tunnel View, about 30 minutes before sunrise, the storm had cleared under the cover of darkness and we were left with its snowy vestiges (not that there's anything wrong with that). The entire world was white, but the sky was blue and we spent the rest of the morning scrambling to all my favorite scenes trying to get as much photography in before the sun erased the snow completely. By 10 a.m. it was pretty much gone and we went to breakfast. The group was thrilled but I was secretly disappointed that I hadn't gotten to show them a clearing storm.

Throughout the remainder of the workshop I monitored the weather. As the days clicked by it looked like our final day would be a wet one, with a warm storm on its way promising rain all the way up to 5,500 feet (Yosemite Valley is at 4,000 feet). When the rain started to fall around dinnertime of our penultimate day, I reminded my group that photographing Yosemite in the rain can be as rewarding as it is miserable, and to their credit everyone was up for a soggy day. So imagine our surprise when our final morning broke to a Yosemite Valley blanketed in white. The unexpected overnight snowfall had turned to a mixture of snow and rain and I knew the snow wouldn't last long. When we arrived at Tunnel View the ceiling was low, obscuring Half Dome and reducing El Capitan and Cathedral Rocks to dark shapes. But Bridalveil Fall was starting to poke through and we broke out the umbrellas and tripods.

Within five minutes the clouds started lifting and we were treated to a 45 minute clearing storm extravaganza. It was still going on when we left, but I knew we weren't going to get anything better than what we had there, and I wanted to share other clearing storm scenes. For 60 more minutes we photographed clouds and snow framing Half Dome and Yosemite Falls from Sentinel Bridge and Cook's Meadow. Then, just as quickly as they lifted, the clouds dropped and the rain came in buckets and we retreated to breakfast.

Most of the rest of the day was more like what we had prepared for, with lots of nice but wet photography. The day ended with another clearing storm from Tunnel View, this time sans snow. But nothing will compare to the thrill that morning when we were all surprised by Mother Nature's impromptu display.

Great capture ! I like the mist effect... well done :)

This is an absolutely fabulous image, and a story to match. If I wasn't so far away, I would join one of your workshops.

Behind the photographers... So many materiel...In the backpack, a bit to many heavy and cumbersome, for mountaneering...

Great experiment , i can feel it in your words , nice to see the group in action ;)

I really like this shot, that captures seven of your people hard at work. Not a one has their eyes on anything but the iconic view. This certainly gives you an advertising image for your workshops as well as a neat reminder of what was a glorious morning surprise.

@Judy: It's funny that you mention this, Judy. If you've been at Tunnel View for a clearing storm you know things change so fast that you can't afford to take your eyes off of the view for a second. But there's a similar picture of one of my groups, taken by Don Smith a few years ago, with everybody marveling at the spectacle except for one guy, a pro photographer (not affiliated with my group) who should know better, who's staring aimlessly in the direction of the camera.

It looks a magic place. this is very nice. The composition is a nice idea

As usual, you have found a new way of addressing a "same ol'" scene--by showing it full of action. The viewer of the photo not only sees the splendor of the old view but feels the anticipation of the photographers as they are grappling with and beholding the magnificence in front of them. That is a two-fold kick in the pant photo. Love it!

Been there LOVED that!