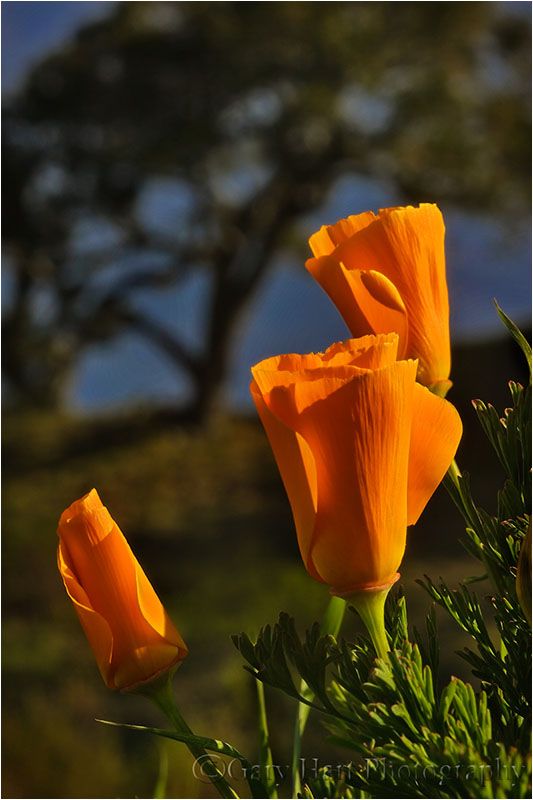 Driving California country roads in March and April, it soon becomes abundantly clear why the golden poppy is California's state flower. Each spring gold and yellow gems saturate sunny slopes from the Sierra foothills to the rugged coast, sometimes reigning over a kaleidoscope of other wildflowers, other times standing on their own.

I found these poppies in Big Sur, halfway up a hill overlooking the Pacific Ocean. Rather than simply compose them in isolation, I looked around for a suitable background and decided this solitary oak would do the trick. To properly juxtapose the poppies and oak I dropped to the ground and shot up the hill; I chose a telephoto to compress their relative distance. An extension tube allowed me to focus close enough to more completely fill the frame with the poppies. The close focus point also gave me the limited depth of field I need to blur the oak close-to but not beyond the threshold of recognition. I was very careful to frame the poppies beneath the oak's arching branch without merging them.

Images like this illustrate why I think the predicted demise of still photography isn't as imminent as video proponents (or paranoid photographers) think. While I do believe it won't be long before we'll be able to make large prints from individual HD video frames, I think there will always be a place for the still photographer who can manage the front-to-back world.

Anybody with a video camera can plant themselves in one location and pan to capture a two dimensional (left/right, up/down) scene where each subject is at infinity. But when you have multiple subjects along the front-to-back plane, you've added a third dimension and a two-dimensional pan no longer renders every possible composition. In a three dimensional scene, even a slight move up, down, left, or right completely alters the image by changing the relationship of the elements. Add in the infinite focus options for your front-to-back plane (where to place the point of focus, and the depth of focus on either side) and the possibilities become infinite.

In other words, even though your output medium (monitor, printer, etc.) is two dimensions, the more you include the third (front-to-back) dimension in your input (capture), the greater the likelihood you'll create something uniquely yours.

Poppies of California... I think that at home they grow as "mala hierba"... I tried of it sowed so often in my garden and I have never succeeded... My bigest gardener frustration......

Your image is marvelous and your explanation is great...Love your framing so much...

Have you visited Vimeo.com? (Video hosting) Some real pearls there. Some are abble to catch landscape with the same powerful energy as photographs...They manage an addition of a supplementary dimension...:The time...Once again, just differents medias and means of expression...

Absolutely fantastic..it is always so exciting to see these first signs of spring! Your framing here is just wonderful, and yes I don't think still photography will disappear -it is an art that cannot be substituted with another...

Gorgeous ! I love that color... and the DOF and composition... just great :)

I know with more and more people able to take good photos with the newer technology it might seem like at some point there would be saturation but I don't see ever how that could be, even for photographers. There are snapshots and there is art and a broad spectrum sometimes between. This is fantastic. The color of course is what draws the eye but your choice to get in a more pithy background rather than just focus on the flowers was wonderful.

How beautiful this is and I enjoyed your description of choosing an appropriate background.

Beautiful color.....I like that they are partially shaded....it brings a richness to the color.

superb composition! love the use of DOF and space here - two clear layers emerge - the out of focus oak and the wonderful poppies - i really like this one!

Nice crisp shot of the poppies and I like the choice of f-stops to just bring in the tree in the background. I always enjoy your work and helpful hints in the commentary.

Gary; this is a beautiful image. I really like the way your poppies pop (sorry) and the background information is clear enough to be interesting but not intrusive. Sometimes the bokeh is so blurry outdoor shots look like studio settings.

Your images about poppies are great. This is very beautifuul with a fantastic DOF.