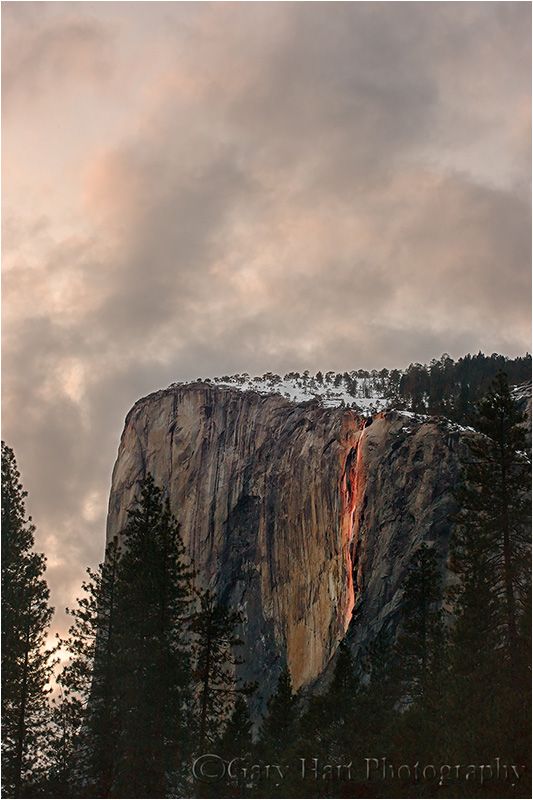 I returned late Sunday night from my first of two Yosemite winter workshops. As beautiful as Yosemite is in winter, the prime objective of most participants in these workshops is the distinctively February phenomenon, Horsetail Fall. In case you haven’t heard, each February, for a few minutes when weather and water are perfect at sunset, the last rays of the setting sun paint El Capitan with a vivid red stripe. The effect isn’t subtle.

I usually fill two workshops with aspiring Horsetail photographers from around the world. Since there’s no guarantee the fall will light up (it only happened once last year), it’s always stressful when I try to decide whether to put the group in position for Horsetail, or opt for one of the more sure-thing sunset locations. But during the orientation everyone made it pretty clear that they’d prefer to forego the classic sunsets and take their chances on Horsetail.

So Thursday afternoon we hit the road for our first shoot with steadfast resolve—Horsetail or bust. After a spur of the moment detour to Tunnel View to photograph amazing clouds and light, we pulled up to the parking area near my favorite Horsetail Fall location (near the river on Southside Drive) with about an hour to spare. There’s only room for a half dozen or so cars here, so (with three cars) I was quite pleased (and surprised!) that the turnout was empty—I’d been fully prepared to go to one of my alternate locations. I rationalized that the growing cloud cover had discouraged the other photographers. Secretly I wasn’t terribly optimistic myself, but I’ve photographed in Yosemite enough to know that you can’t predict the conditions in five minutes based on the conditions now.

Before starting I advised the group that the red light we were waiting for wouldn’t come until about five minutes before the 5:35 sunset, and would only last a few minutes, so they should find their “go-to” compositions now. Then we traipsed through crusty snow and set up beside the river. While we waited I walked around helping everyone with their compositions and exposure settings; we all chatted, laughed, and intermittently photographed clouds accumulating atop El Capitan. As sunset approached the clouds were clearly thickening overhead and there was no sign of the direct light we needed, but I tried my best to diffuse discouragement with anecdotes of prior Yosemite weather and light surprises.

Still, I remained secretly dubious, and by 5:30 even the most optimistic in the group had started talking about dinner. So imagine our surprise when, just three minutes before sunset, somewhere on the western horizon the sun slipped into a hole in the overcast and within seconds transformed Horsetail Fall from a dull gray smear to a crisp crimson ribbon. Almost simultaneously the clouds overhead separated and gave us a brief glimpse at blue sky. Fortunately all had heeded my advice to have their compositions ready, so despite the dramatic suddenness there was no panic shooting. Between exclamations and gasps we photographed the show for three and a half minutes. Then the light turned off as quickly as it had turned on.

I’ve photographed Horsetail Fall many times, but have only seen it this red once before. At moments like this it really is like nothing you’ve ever seen—the closest comparable natural phenomenon is molten lava. Given the number of Horsetail images in my portfolio, the greatest pleasure it gives me now is watching the reaction of those seeing it for the first time, and this experience was certainly no disappointment on that count either.

Of course the beauty of Horsetail Fall is not lost on the rest of the world; in recent years the park has been overrun each February by photographers with that single objective. As we entered the weekend my group found comfort in the knowledge we had our Horsetail Fall shots in the bag. There was a certain smugness as we drove past the various Horsetail vista locations and saw cars already stacked out onto the road and photographers stationed by their tripods three hours in advance.

This underscores a growing problem that could affect every nature lover, not just in Yosemite, but everywhere. Most photographers are respectful of the nature and their fellow nature-lovers. But a few ignore signs, trample fragile terrain, block traffic, and are rude to others who want to do nothing more than marvel at Nature’s wonders. I’m afraid the proliferation of photographers precipitated by the advent of digital photography only exacerbates the problem. And as our numbers grow I fear these problems will increase. At best this disrespect reflects poorly on all photographers; at worst they risk forcing access restrictions on everyone. Please people, let’s respect the landscapes we love, and the people who share our passion.

A glorious image. I like the touch of crimson in the sky that matches the Crimson Ribbon !

what a climbing way...

Very beautiful! That is quite amazing!

All good things come to those who wait, patience paid off in spadefuls for this image.

Incredible masterpiece of nature and yourself!

lovely composition and light with fantastic detail - the touches of crimson on the clouds were well worth the wait!

You've taught me a lot over the course of three workshops, but a lesson that keeps paying off is being there early and staying late. I've gotten a few images I'm proud of only because I was there before anybody else showed up or stayed past the time everybody else gave up and left. Thanks! I really hope to see Horsetail next winter on you workshop.

@Chuck: Thanks, Chuck. Yeah, I'm always telling my groups that the best time for pictures is when "normal" people would rather be inside: before sunrise, dinner time, after dark, miserable weather. But all the misery is worth it when something like this happens. It would be great to share the misery with you again next winter. :)

Absolutely beautiful this landscape, this fantastic orange hue on the mountain as if it bleeds!

What a great photgraph of Horsetail Fall!

Your comments about respecting our fellow photographers and our surroundings when photographing, struck a cord with me. I'm always up long before my neighbors, if I have any hope of photographing in my my favorite neighborhood spots. I have to admit that I'm not always excited about having company while I'm shooting, particularly if I've patiently waited for a particular shot. Guess it's time to look for new venues!

See you for the Dogwoods workshop!

Very beautiul POV. The golden light line in the mountain is great and catch our eyes immediately.

Gary; I have heard about but have never seen this. Beautiful image.