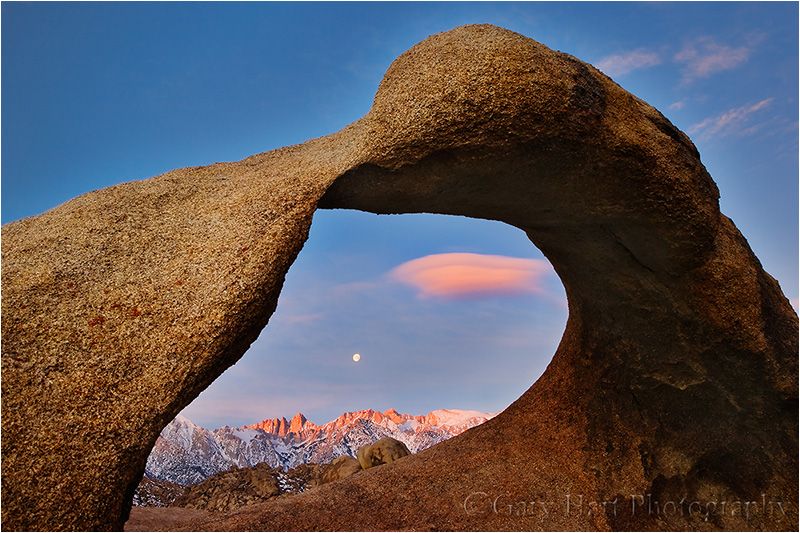 Consistently finding great photo opportunities isn’t luck, but neither is it a divine gift. It’s simply a matter of doing your homework. I take great effort to anticipate rather than react to my opportunities, to be in place before the shot happens. In my “Three Ps of Nature Photography” article this foresight is "P" number 1: Preparation.

When I scheduled my 2010 workshops way back in early 2009, I pulled out the lunar tables and figured out that starting my Death Valley workshop on January 29 would give my group at least one moonrise and two moonset opportunities. I checked the altitude and azimuth of the moon on these days and determined exactly where I wanted to be for each. It turned out Mother Nature had other plans for Aguereberry Point, my Death Valley moonrise location; a few days before the workshop She deposited enough snow above 5,000 feet to render all of Death Valley's high elevation vistas inaccessible. So I countered with a sunset moonrise on the dunes and all was well. But this was just a teaser—by far the two moon shoots I most looked forward to were a sunrise moonset at Zabriskie Point, and a moonset behind Mt. Whitney from the Alabama Hills at sunrise on our final morning.

Of course despite the need for careful planning, there is indeed a luck component to nature photography—while the moon’s position and phase can be computed with precision, the weather is a complete crapshoot. I wasn’t too concerned about Zabriskie Point because blue skies are pretty much the rule in Death Valley. But Mt. Whitney in January is another story—I’ve waited days for it to emerge from a persistent cloudy shroud.

So I was quite pleased on the final morning of my workshop to see stars overhead as the group assembled for our sunrise shoot. My excitement grew on the drive to the Alabama Hills, as in the faint light I could see a few clouds on the western horizon—not so many to threaten our view of Whitney, but enough to catch some of the rich color I always hope for.

When we pulled into the parking area near the Whitney Arch (aka, Mobius Arch) the sky was still fairly dark, but the group had learned long ago that this is great light for photography and they quickly scattered. Don Smith and my brother Jay (both assisting me on this workshop) stayed with the people who wandered toward the boulders south of the parking area; I went with the contingent that made for the arch (where we’d photographed the night before). When we reconvened later it was clear everyone was pretty happy with the sunrise light, lenticular clouds, and rich color we'd been blessed with. But to me what set the scene apart was that elegant moon I'd been looking forward to for nearly a year.

A few words about alpenglow
Mt. Whitney is famous for its sunrise "alpenglow," a pink cast that bathes the summit just minutes before sunrise. Alpenglow is really just a terrestrial manifestation of the rich pastel pink that appears right above the horizon opposite the sun just after sunset or before sunrise (it has other names, such as twilight wedge or belt of Venus). This glow is caused by the day's first or last rays of sunlight bending along the curve of the earth--most of the colors of the spectrum are scattered out by the atmosphere, leaving only the red near the horizon. Normally this color is seen only in the sky, but mountains that rise so far above the surrounding terrain that the sun's lowest rays are unobstructed, actually jut into this zone of color for a few minutes at sunrise or sunset. Just one more reason to rise a little earlier in the morning, and stay out a little later in the evening.

A little about my approach to this capture (for photographers only)
Whitney Arch pictures are so common as to risk being cliché. The cure for a cliché image is a unique composition and/or special conditions. As the sunrise unfolded I knew the special conditions criterion would be met and I worked to find a composition that did it justice (this jockeying is complicated by the fact that I always let my group get their shots first and then work around them).

I found that by moving left, lower, and farther back than I usually shoot here I could balance the moon with Mt. Whitney and the colorful lenticular cloud and frame them all in the arch. I zoomed as tight as I could without trimming the arch. Because focus was critical here I stopped down to f16 for extra depth of field (I try to avoid going smaller than this unless it’s absolutely necessary, as diffraction and lens optics at the smallest apertures degrade image quality). The texture of the arch is so important to this scene that I opted to focus on it rather than Mt. Whitney. I chose a focus point on the arch as far from my lens as possible (the back side a little beneath the cloud) to maximize my focus range. Before clicking my shutter I used my depth of field preview to confirm that all of my foreground was sharp.

I spot-metered on the cloud and found ½ second would ensure that I’d keep all the color I could see—I wasn’t concerned about the shadowed area under the arch going a little dark. After the capture I checked my LCD to be sure the moon wasn’t blinking (blown highlights) as I always like to get lunar detail in my moon images.

When a scene excites me like this I'm never satisfied with a single composition. So once I was satisfied I'd accomplished my original objective I bracketed a number of images, not for exposure but for compositional variety (wider, tighter, horizontal, vertical).

Just an awesome shot! Colors, composition and detail are just spot on!

That arch makes a natural frame for the mountains as you so clearly show. A beautiful shot!

Stunning photograph, Gary. This is one of those photos that make you feel, 'Wish I was there' :).

Wonderful framing Gary... I love it :)

I make a wish...If I win to the loto, I follow you on one of your workshop!!!

@KriKridesign: I'll keep my fingers crossed for you, Christine.

We can't win the Lotto if we don't play, but if we did, we'd ditto KriKri's wish!
Gorgeous image, and fantastic 'approach' technique!

Love the lighting on the distant hills and the sky is gorgeous, not to mention the framing with the arch! Great image, Gary.

This is wonderful! The textures and light in this image are stunning! I love getting some insights about how you go about shooting and thinking, Gary! I always gain something that I am able to take out with me each time I go!

Very nice picture.
I love the framing created by the rock.

This is lovely, Gary, I wish I could have cloned myself and been in both locations! I love the softness of the pinks and blues in this image and you did a terrific job of getting the arch sharp and well composed.

WOW!!! This is fantastic! I like it a lot. Great textures and superb framing. The tones are simply beautiful. Bravo!

The photo is incredible and resonates a clean crispness in the air. A masterpiece! :)

another superb photo! keep them coming and your explanations are excellent and informative as well! the framing here is perfect and good DOF allowed you to keep good detail in the arch but also for the peak to look sharp enough in the background...

I enjoyed the photo as much as the blog!

Gary, very nice scene. The size of that moon really anchors reality there. You got a UFO to hang out in the right place too.

The texture of the rock arch is awesome and the light on the mountains in the back ground with that moon up above. You managed to get a good transitional time of day. I shouldn't say managed, you did plan it. Your planning still amazes me maybe because you not only have an eye for things but you have skill. The latter I have yet to develop, the former many people have told me I have. My artistic side wars with this because it just feels like art.. and planning don't seem likely partners. So yes.. I look at this and am enlightened. =)

@Self-Indulgence: Thanks, Kirsten. In my workshops I get to observe many photographers and their approach to photography. Some are ruled by their intuitive side and have no trouble finding interesting subjects and unique compositions, but they're frequently reacting to conditions and subjects, and often struggle with exposure and metering, focus points, their equipment in general, and many other aspects of craft. Others are ruled by logic; they anticipate shots, nail the exposure and depth of field, use their equipment to its fullest, but are constrained by the "rules" of photography. The most successful photographers have achieved a synergistic relationship between their intuitive and logical sides that allows them to tap each side at will without one getting in the way of the other.

Very beautiful., nicely framed. The composition , the soft colors and the textures of the rock are great.

I recall having a beer in that arch, , , thanks for the memories and great image!

I LOVE this shot! I am an avid photographer and your photos have give me inspiration! Landscapes and nature is my passion. I am traveling this summer to photograph Alaska!