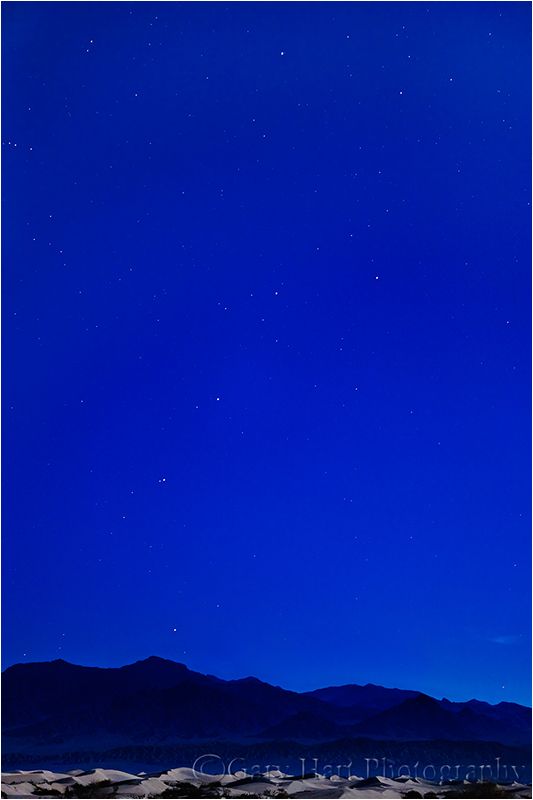 Spoiled by two spectacular sunsets and sunrises (4 for 4), I was a little disappointed I couldn't make it 5 for 5 with my Death Valley workshop's day-three sunset. Instead of the horizon-to-horizon color we'd grown accustomed to, we did the best we could with clear skies and warm but unspectacular light at Artist's Palette. I'd already planned a moonlight shoot for the Alabama Hills the following night, but I thought it might be fun show everybody moonlight on the dunes. So I suggested an optional bonus moonlight shoot to all who were interested. Eight of my participants were waiting at the cars at the designated departure time (the "party car" had other plans) and off we motored to the Mesquite Flat Dunes near Stovepipe Wells.

One of my favorite things about taking a group out for moonlight photography is their surprise at how easy it is, and their amazement at what their camera is capable of. In fact, before we start I pretty much guarantee everyone that they'll have a success (talk about pressure)--as far as I know nobody's been disappointed yet.

Rather than traipse across the sand in the dark, my plan was to station ourselves near the road where we would have a wider view of the dunes. I like this perspective at sunrise and sunset and had often thought it would be nice for moonlight. Before setting everybody free I gave a brief orientation that included exposure settings (it's really as simple as following a basic recipe*), composition suggestions, and focus tips. I then wandered among the group answering questions and offering suggestions. Within five minutes everyone was in the zone (the ooohs, ahhhhs, and "Oh cool!"s are a dead giveaway) and it was clear they just wanted to be left alone with their cameras. That's when I set up shop and start working on my own compositions.

I like including recognizable constellations in my moonlight images, and he first thing I saw was the Big Dipper hanging above the dunes. Shrubs obscured most of the dunes in the Dipper's direction so I walked a couple of hundred feet up the road to a higher vantage point. I like vertical moonlight compositions because it's really all about the sky and opted for that here. After one image it was clear that this was the place to be so I suggested that the rest of the group join me.

Night photography seems to bring out the fun in people. Nobody strays too far so we all end up shooting together. And the immediate success everyone has, plus the 20 or 30 seconds of waiting for each exposure, are a great recipe for extreme levity. That night was no exception.

The next day I showed everybody how to process their raw files (it takes maybe 30 seconds). We went out again that night in the Alabama Hills, where everybody had a great time photographing the weathered granite of the Alabama Hills with snow-covered Mt. Whitney in the background. It was much chillier (there were patches of snow at our feet) but somehow nobody seems to notice the cold when the photography's good.

* Okay, here's the top secret moonlight exposure recipe. I'll share it with you if you promise not to tell anybody (though I'm not too good at keeping this secret as it will be revealed in even greater detail in my April "Outdoor Photographer" magazine article).

This assumes a full or nearly full moon, within a day or two of the actual full date. Put your camera in manual mode, set your ISO to 400, aperture to f4, and shutter speed to 30 seconds. This will get you to within a stop of where you want to be. I ignore the histogram (it will be far to the left, as it should be for a night image) and just eyeball the LCD to make my final exposure refinements.

I'm usually pretty wide for my night images, which makes focus more forgiving and minimizes star trails. In this image I was composed a little tighter than usual so I bumped the ISO to 800 and dropped my shutter speed to 15 seconds to avoid star trails. Also, if you have an f2.8 lens you can open up a stop more and go with a lower ISO or faster shutter speed. And finally, night images should be blue so it's best to shoot in raw and cool the color temperature to 3,000 or so in the raw processor. Enjoy!

Wow it's like a dream ! I can imagine myself there just sitting and watching the stars ! I've always been fascinated by a starry sky ! Beautiful :)

@Tamara: The sky in Death Valley is fabulous because it's so far removed from any city lights. On a moonless night there it almost feels like you can comprehend infinity.

I'm jalous...Here in Switzerland, we NEVER can see such a pure sky...always planes, everywhere...And your picture is perfect!

@KriKridesign: Thanks, Christine. If it's any consolation, those of us in America are jealous of you for the incredible mountain scenery right outside your front door.

Wonderfully cool, in more ways than one and I like your 'recipe' ... thanks for sharing it!
I'm surprised to read KriKridesign's comment about not having a clear sky.

So many sky is a great idea, nice compo and great night shot.

Lesson! My night time sky stuff has been such a disappointment. Even my moons haze on a tripod. I can't wait to get out there and try your 'secrets'. This is just gorgeous! I love the vertical exposure, really emphasizes the sky. I'll remember that too provided I have a good setting. A bit limiting in my area.

@Self-Indulgence: Thanks, Kristen. I'll give more details on it in the April "Outdoor Photographer," but basically when you shoot moonlight you need to be pointing away from the moon. If you want to photograph the moon and keep detail in it, the best time is the right before sunset one day before the full moon, or right after sunrise one day after the full moon. The best subjects are reflective objects--I would think Lake Michigan would work well, especially if you can find something to silhouette against the lake, though you might need to head a little north of town to get away from the lights.

What a tranquil shot!

perfect exposure - the star field looks excellent and it is good to have a bit of interesting foreground in the frame as well...

it doesnt get any better than this !

This seems like something from another planet! :) I love it! The colours of the sky is beautiful and the stars are amazing! 5 stars for sure. Bravo!