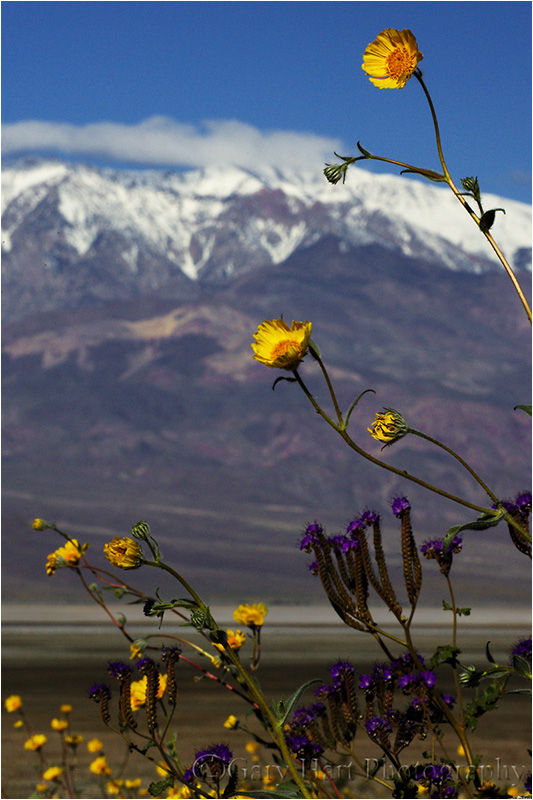 I'm at the midpoint of my Death Valley workshop and because I don't have time to process my images from this trip I thought I'd share something from my trip in 2005.

I'd driven to Death Valley at the last minute, just one of thousands of photographers and flower peepers from around the world drawn to what had been billed as the "100 year bloom" in the park.

A bloom like this requires heavy rain earlier in the season, ideally the previous fall. That's a pretty tall order in an environment that receives less than two inches of rain each year. Some of the reports and pictures coming back were borderline unbelievable and I held my breath entering the park, hoping that I hadn't been duped by hype. As I crested the pass and descended toward Stovepipe Wells I knew my trip would be worthwhile. Before me unfurled a tapestry of gold stretching all the way to the distant Funeral Mountains.

As abundant as the wildflowers were, I think their numbers were rivaled by the cameras aimed in their direction. Seemingly overnight the crowds had transformed sleepy Death Valley into a bustling metropolis bursting with far more people than it was equipped to handle. I waited two hours for dinner, and was only able to be seated that fast because I was okay with a seat at the counter. Asking for a room elicited no more than a chuckle and a shake of the head--I ended up parking my truck in a remote corner of the Furnace Creek Inn parking lot (park rangers were scattering unsavory characters like me at scenic vistas and roadside turnouts) and slept beneath the stars.

For this image I wanted to highlight the flower display and with snow-capped Telescope Peak in the background. Near Badwater Road a few miles south of Badwater I found this group of wildflowers with Telescope Peak in the background. With a moderate telephoto I positioned my tripod as low as it would go and lay on my back to compose (this was in the days before live view). In scenes like this I think it's essential for the foreground subject to be perfectly sharp; the background is for context and I prefer a little softness. Using my depth of field preview I chose the aperture that gave me complete sharpness throughout the foreground wildflowers while rendering Telescope Peak just a little soft.

FYI, at just over 11,000 feet Telescope Peak is the highest point in Death Valley. It looms above Badwater, 282 feet below sea level, the lowest point in the western hemisphere. This morning my workshop group photographed a beautiful sunrise from Badwater; tomorrow evening we'll be in Lone Pine photographing sunset at Mt. Whitney (less than 90 miles away as the crow flies), the highest point in the contiguous United States. Pretty cool.

I'm surprised at the apparent shallow dof considering that you used f25.0

@Curly: I was at a moderate telephoto focal length focused at the closest possible distance.

Beautiful composition with the soft mountains in the background, and nice light in the flowers.

Really nice color.. can't wait to see what you have from your workshop. You know when I think of DV I think of.. desert.. and.. like nothing. And it actually isn't. I hope the weather keeps for you guys so you can get both your highs and lows ;) only in photographs.

always surprising to see under wich conditions life is still able to persist...And wich such colors, really a nature treasure

Exquisite foreground, Gary ... and beautiful soft coverage of the mountains in the background! *****

great composition - the flowers and especially their colours look really good against the mountain in the far distance! good focus and DOF!

The jewel-tone beauty and detail of these flowers is made all the more enticing by the contrast of the wonderful majestic mountains behind them.

Very nice composition against the mountains. Colors really pop too.

Terrific! I like the yellow and blue. Great dof

That is a great perspective and beautiful image.