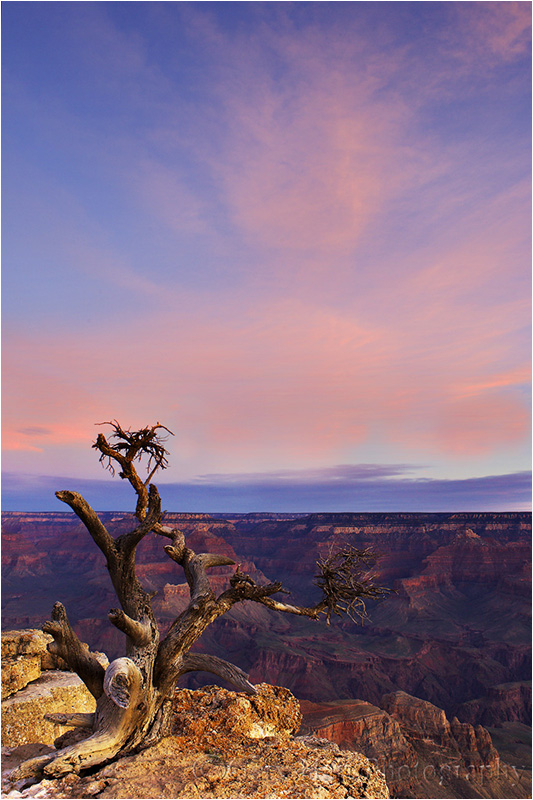 I'm in Death Valley for a workshop this week with not lots of time to post.

Today's image I took on a chilly spring morning several years ago, on my first visit to the Grand Canyon as a photographer (I'd been there as a child). The road to Yaki Point was closed for maintenance so the shuttle driver deposited me about a mile away, in complete darkness. He suggested a trail that may shorten my walk a bit--it wasn't until I returned on the same route in full daylight that I realized how close I'd actually been skirting the canyon's rim. (I think the shortcut the driver must have been referring to was to the Colorado River a mile below.)

By the time I made it all the way out to Yaki Point the horizon was starting to brighten to reveal some potential for nice color in the thin clouds hanging there. I continued walking east along the rim, searching for a foreground subject. I found this great tree and decided to set up shop here, making a number of compositions featuring "my discovery" in the changing light. It wasn't until later, when I started recognizing other Yaki Point images using the same tree, that I realized my discovery wasn't quite so groundbreaking.

Nevertheless, it turned out to be a fine morning with beautiful pink hues that complemented the canyon walls perfectly. I opted for a vertical composition because it enabled me to emphasize the sky.

Believe it or not, the Grand Canyon is a difficult place to photograph well. It took me several return trips before I felt like I was finally getting it. This image underscores the difficulty that comes with photographing popular locations the first time. Our eyes, trained by the photographs of others, tend to go to the more obvious subjects and compositions. And while we may get nice results, it's difficult to come away with something truly special (unique). It's not until we really become familiar with a location that we can see beyond the obvious to capture the area's essence and make it our own.

Awesome capture - the place to be!

GORGEOUS...and I MUST visit the US!

Like an explosion of light in the sky ! Beautiful.

Love the intense play of colors..great!

I don't mind that others may have made similar images! The light and clarity in yous are stunning! I love that I can see the texture and details of the far away rim, It goes very nicely with the texture of the old log and gives me an overall ancient, timeless feeling. When I am out somewhere for the first time, I like not having seen too many images from that place, that way I feel like my compositions are more "my own" and that I am not unconsciously copying something I have seen. I have only seen the GC one time, and was so overwhelmed....I would love to go back!

Beautiful image, with a super foreground, and i like the red tones.

It sounds like you were pointed in the direction everyone gets pointed yet you discovered this point [using that word a lot] on your own like a true explorer. That makes your vision in a way unique. Besides, I bet you took the best photo out of them all !

Incredible colors in that sky.....love it Tracy!

the curse of famous places - trying to get something unique requires a unique vision and i think that you have shown that you have it right here! excellent composition and great use of light - the colours are amazing!

Thanks for your comments everybody--I'm in Death Valley leading a workshop and am able to respond even less than usual.