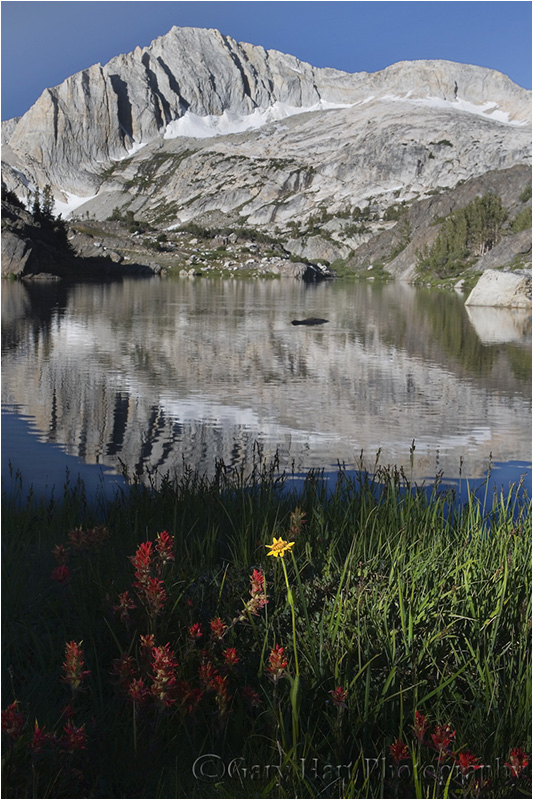 My introduction to the Sierra backcountry came the summer before my senior year of high school. I'd been raised in a family where vacation meant sleeping bags and tents in nearby Yosemite, Sequoia, or Kings Canyon, but the hardships of those adventures were limited to whatever might be encountered at numbered campsites and scenic turnouts. While these trips engendered a healthy appreciation for nature, I was not prepared for the epiphany delivered by the full emersion experience of backpacking. Suddenly I felt like I was more than merely viewing nature, I was experiencing it.

For many years thereafter I was an avid backpacker, looking for any excuse to retreat into the grand solitude of the High Sierra. As the contingencies of adulthood (career, marriage, family, mortgage) shifted my priorities homeward, the trips became shorter, but also started to include a camera to help me capture and convey my feelings.

A few years ago my daughter expressed an unexpected desire to try backpacking (the same daughter who was reduced to convulsive tears whenever she couldn't wear a dress to kindergarten). I quickly recruited a friend and the three of us spent an extended, late summer weekend exploring the Twenty Lakes Basin just east of Yosemite. The years must have mellowed me because backpacking has become less about covering terrain and more about savoring the scenery. Rather than logging ten or twelve daily miles at 11,000 feet, we hiked few miles, then set out cross-country for a short distance until we found a nice camping spot. There we set up camp for the duration of our trip, taking day hikes throughout the spectacular terrain. My delight with the surroundings was magnified by the vicarious joy I felt watching Ashley's first backcountry exposure.

The mountain in this image is North Peak; its crest is on the boundary separating Yosemite National Park and the Hoover Wilderness. The lake is one of many unnamed gems decorating the aptly named Twenty Lakes Basin. To capture this image I woke before sunrise and wandered downstream on the creek adjacent to our campsite until I encountered this lake. Blocked by a granite ridge, I waded about fifty feet through (frigid) shin-deep water to reach this patch of wildflowers, then watched the sunlight descend the peak to meet me.

Love the flowers in the foreground. They give that little bit of color and warmth to what would be a very cool scene.. which means you got the best of both worlds here.

amazing! You are always super brave when taking pictures - I got cold just reading about the water!

@Elora: Thanks, Elora. You know it's a funny thing about photography to me at least--when I'm taking pictures, cold just doesn't bother me. I can be aware that it's extremely cold, but for some reason it doesn't affect me. On the other hand, at home when the temperatures drop into the 40s and I have to take the garbage out or walk the dog, I'm the biggest wimp in the world. Go figure.

@Lambspun: Thanks. One of the best things about backpacking is that everything is new. There are surprises everywhere you look.

Awesome image Gary - what makes this for me is the foreground flowers - and of course you found a yellow one in the midst of the red! Great work!!

What perfect timing! The shaft of light that illuminates the yellow flower is something very special! ( I love spending time with my kids in the back country...I feel like I really get to know them without all the daily distractions!)

Wonderful shot, the flowers really bring your eyes in and then expand to the water and mountains!

superb light and composition! excellent perspective looking up over the flowers towards the mountain - what a beautiful place!

Very beautiful! I like the reflections in the water and the flowers in the foreground are beautiful.

So majestic and stately, like the softening touch of the flowers.

I have amazing memories of that trip - I'm so glad your photos captured the scenery so well.
And for the record, it's been at *least* 15 years since those fashion-related meltdowns. At least.