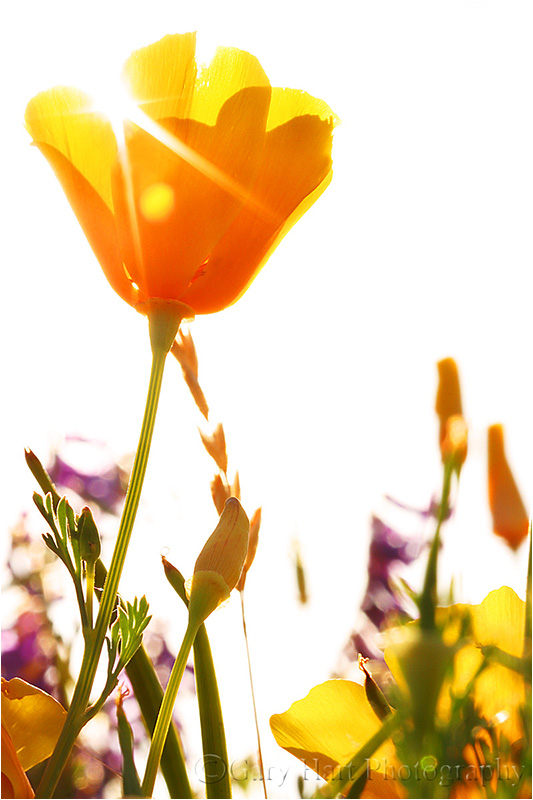 Maybe a break from the recent winter theme is in order. Anyone ready for spring?

A frequent topic recently has been "rules" in photography. These rules have value, and are usually based on sound, proven reasoning that result in sound, competent images. But true artistic success requires doing something new, yet if there's a rule for something, doesn't that mean it has already been done? So, paradoxically, genuine creativity requires breaking the rules that are supposed to lead to good images.

One of the most absolute pieces of photograph advice we hear is, "Never blow your highlights!" And for the most part I agree that blown highlights ruin an image. In fact I've spent a lot of time writing about how to deal with difficult light, and it's all been based on the premise that we need to save the highlights at all costs. In blog posts I've written about exposure methods, graduated neutral density filters, digital blending, HDR, and silhouettes as techniques for saving highlights.

But what if we say it's okay to blow out the highlights? Suddenly a whole new world of possibilities opens. In today's image it would have been far easier (and more comfortable!) to follow the "rule" and photograph this poppy from above where the light wouldn't have been a big problem. But I really like the glow of backlit poppies and decided to see what I could find by getting on my back and shooting up at the poppy's backlit side. It was immediately clear that exposing to retain the blue in the sky would have rendered the poppies black, but rather than give up, I simply exposed to maximize the poppy's color, completely blowing out (overexposing) the sky. The result was a striking white background that actually underscores this brilliantly backlit poppy.

Something I constantly encourage my students to do is start with the conventional shots, but aggressively seek the unconventional. If a "rule" applies, go ahead and follow the rule for a shot or two, then look for opportunities to break it. You may end up with more failures than successes (but of course nobody needs to know that), but I'll bet your successes will turn out to be among your favorite images.

So glad you decided to 'blow out the highlights.'
This is a whopping good shot...interesting, arresting, provocative, colorful, and really good looking !!!

Love the creativity and the special effect in this shot Gary ! Brilliant idea :)

Gary, your work is simply brillant!

Way to go Gary. I was just talking recently with John Barclay about the subject of shooting from the heart and not the rule book - being a voice and not a parrot, etc. Intentional overexposure can work very well at times and this is a great example in this floral splash of color. Let's all step out of that proverbial box every now and then!

Wow, yes I am now ready for spring, I've already had enough of the cold. I really like this shot, the angle is fantastic and the yellow-orange of the poppy pops against the white background. Five stars from me :)

Yes I´m ready for sprnig, even more I´m ready for summer, and this is a Beautiful image.
About the rules I agree and I must tell you that break the rules, even without good results, make me feel good.

I like the illumination through the petals with the white background. It reminds me of making tissue paper greeting cards when I was a child, and seeing colors through colors.

Rules give you a place to start...the vision to break the rules is what makes this image yours. Blowing the highlights gives it a "dreamlike" quality and great result. Makes me wish spring was here (eventhough we just started winter) so I can work on my "poppy collection".

great shot! very creative and different thinking as well! i think it all comes down to what you want to achieve in your photo - there is a difference between blowing the highlights or breaking the rules on purpose and simply "stuffing up" where otherwise a proper technique would be required to produce a good result... the world is open to our interpretation through whichever way we may decide to proceed...

Gary, thanks for warming up my day! I love high key images, and this one really works!

who cares about rules if the photo is just beautiful like this one? i believe no one...

It's really great to see something different - and this certainly fits that category! It's so good it almost looks artificial!

WOW! This is beautiful. I love the light - you have captured it beautifully

Now that just looks awesome! Rules were made to be broken!

Gorgeous, and different, I love this.

@Michelle: Thanks, Michelle. Different is good. :)

Wonderful entry. Thanks for the reminder to take some chances. That should be our theme for 2010. :)

This is absolutely beautiful! I love this shot!! It makes me long for spring.

I love the translucence of flower petals. This image just knocks me out.