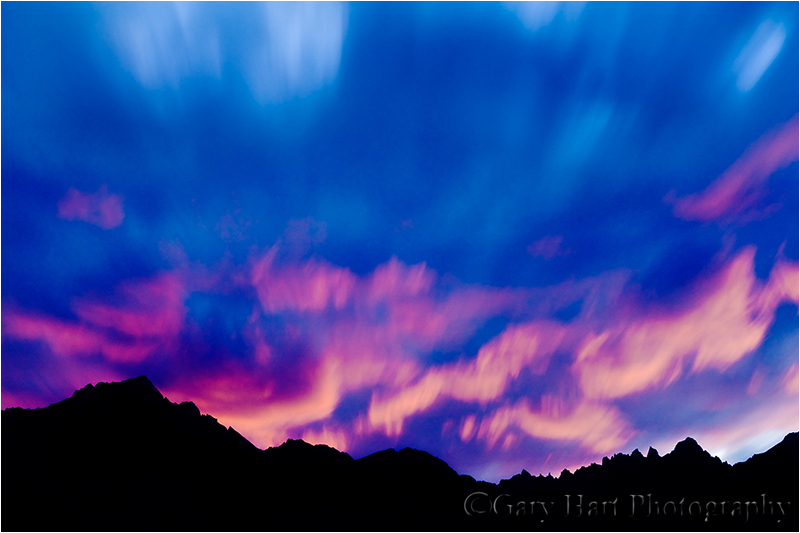 Northern lights? Lava lamp composite? Sixties flashback? No, just a long exposure in the waining moments of a breathtaking Eastern Sierra sunset. Seriously, I did very little post-processing for this image (and I swear I didn't touch the saturation slider). The truth is, today's cameras possess an amazing ability to capture light and extract color the eye can't pick up. Most photographers, perhaps ignorant of this capability or unaware of the color that remains after their eyes no longer register it (or maybe just cold and hungry), go home far too soon following a sunset. This image was captured an hour and a half after the sun had disappeared behind the crest, and 25 minutes after the "official" sunset time (official sunsets always assume a flat, unobstructed horizon).

On this evening late last September my workshop group had enjoyed a spectacular light show behind Mt. Whitney, watching electric reds and magentas deepen to crimson before finally fading. Though the sky had darkened beyond our eyes' ability to register color, I decided to fire off one more frame using the sawtooth outline of the Sierra Crest (that's Lone Pine Peak on the left and Mt. Whitney on the right) to silhouette against the darkening sky. In manual mode I spot-metered on the sky behind Mt. Whitney, dialing my exposure to +1 over middle-tone. The long exposure was enough to wring the remaining color from the sky, but still not enough to raise the mountains much beyond absolute black.

As you can probably see, a fairly stiff wind was pushing the clouds rapidly across the sky, enabling the 25 second exposure to create a motion effect that I think enhances the image. But the most interesting thing for me is how closely the color in the image matches the color my eyes saw just a few minutes earlier. In other words, though the sky had darkened to my eyes, the color remained.

This image perfectly illustrates a point I frequently make in my blog and to my students: Don't limit your photographic objectives to your eyes' view of the world; rather, learn to understand and use your camera's unique vision. You'll be a more creative (and happier!) photographer for it.

These are some really bright Northern Lights....fiery! You never can tell what you will see. A recent one I have seen lit up my woods like they were on fire.....we ran out of the house to find the aurora borealis going on! :)

@Lambspun: I wish we got Northern Lights here in California.

Well said, Gary. I love the time after sunset, but have not tried much to shoot in the total darkness to capture that vanishing light. You have inspired me to give it a try! I like the graphic quality of this image a lot!

Well, tell us what you will about photographic occurrences...I KNOW that you just whipped out a big fat watercolor brush and created this gorgeous gem !!! ;-) (teehee)

@Dulcie: Shhhhh. ;) (I wish I could wield a brush--I have much admiration for those who can.)

Beautiful photo. The long exposure gave a fantastic dinamic to the image, and the colors and shadows are fantastic.

Well done, Gary, and another good lesson, this time on what our cameras 'see' that our eyes do not.

this is an amazing and quite surreal effect! it is as though the light was just coming in waves towards the camera - fantastic colours too! it is even more impressive when one set the wavy patterns against the strong and sharp line of the mountain silhouette below!

Gary - great capture and the last twilight with that color!! I have noticed that my camera really picks up the blues in the sky after the sun has set, and my eyes do a lousy job of picking it up. I can usually see the red pretty good. I like the long exposure effect here!