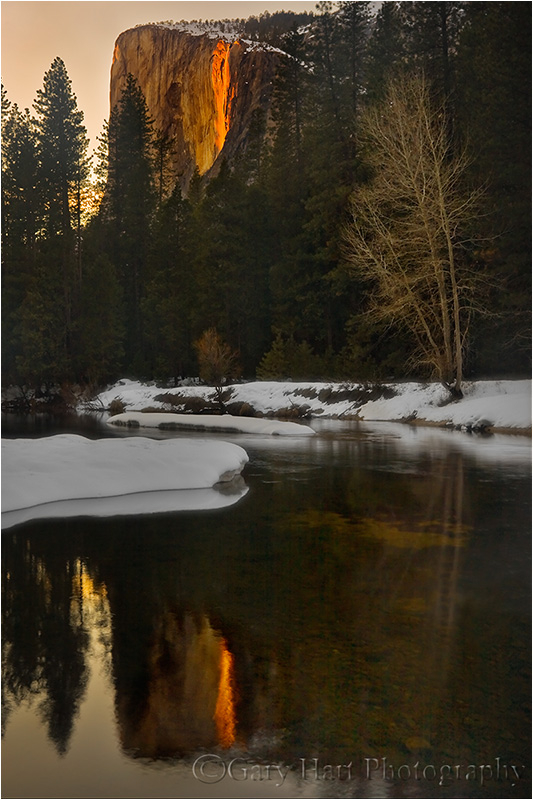 Horsetail Fall is a Yosemite winter phenomenon that draws photographers from all over the world. A show like this is only possible in February (the light is also right in October, but the fall is usually bone dry then), when sunset light strikes El Capitan at just the right angle, backlighting Horsetail (barely a trickle even in the wettest years) with warmth.

Most Horsetail Fall images are taken beneath the fall, from the picnic area on Northside Drive. I like this perspective from a little upstream and across the river. In my February 2 post I shared a tight (more conventional) composition of Horsetail Fall from this location. But on this visit I wanted something a little different and went wide and vertical to include the river.

This composition gives a little more perspective than the standard (albeit more dramatic) telephoto composition. Here you can get a sense for the shadow that sweeps across the face of El Capitan as the sun drops toward the horizon. The shadow starts near El Capitan's nose and moves toward the fall; as the shadow expands, the remaining light warms to amber, then pink, and finally (if you're lucky), crimson. At its peak, just before the light disappears entirely, Horsetail Fall resembles molten lava streaming down El Capitan.

The problem with photographing Horsetail Fall is that there are no guarantees. The sun needs an unobstructed horizon at sunset and I've been there many times when everything appeared to be setting up perfectly, only to watch the light extinguished by some unseen cloud in the distance. I've also been there when it didn't look like anything was going to happen at all, then been awed by a last minute show when the sun peeked beneath the unseen obstructing cloud.

Some Februarys Horsetail Fall puts on its show many times; other years it doesn't happen at all. In 2008 it happened more than half of the evenings I was there; in 2009 it happened only once the entire month. (Fortunately, when it doesn't happen it usually means there are lots of clouds and all the other photography is great.)

To say Horsetail Fall has become a photographers' phenomenon would be an understatement. Each year thousands of photographers from around the world flock to Yosemite hoping to capture it. My Horsetail Fall workshop has become one of my most popular (even without Horsetail it's a great time to photograph Yosemite), and I usually have to add a second one when the first fills. (2010 is no exception, as my first workshop filled several months ago and I did indeed add a second.) But workshop or not, do yourself a favor and add Horsetail Fall to your list of things to do before you die.

Another fantastic blend between warm and cold colors. The composition is fantatsic, and I love the mirror in the water.

Wow... these reflections are great !!! What a magnificent composition !

Awesome Gary! I absolutely love this perspective! It gives Horestail more of a sense of place than we are used to seeing. This really proves that no matter how many times you see or photograph a place, there is always something new to find! I am awestruck by this!

@Tracy: Thanks, Tracy. That's an important lesson that I was originally going to make the point of this post, but then I got on a tangent (as I often do), so I'll have to save it for another day.

This is beautiful and although your "tight shot" is dramatic, I do really like this broader view with a greater perspective of what's going on around El Capitan.

@Judy: I haven't decided which I like better, and experience has told me to give each image a little time before making any rash decisions (like printing and framing it large). But I'm always interested in hearing what others think, so thanks.

Hey Gary...Another unique capture ! Shot from a different location, great color and a very nice reflection in the river.

I love this composition, Gary. The placement of the tree on the right adds visual interest. Great capture on the light!

Yes, it is definitely on my bucket list! Gary, I love the warm tones in this photo. It feels almost like a painting, and the reflection, which nicely divides your photo in half, works so well.

superb composition and light! that golden glow is wonderful and catches the eye instantly... what an amazing place!

postcard perfect photo! so majestic and serene. would love to be there right now and just meditate. love it!

Always enchanted by your shots!

I think my preference for this shot is that reminds me of our one visit there, where the tight shot is more of a dramatic image rather than a memory, if that makes any sense. :D

hi, this stunning of course~~ I also love the golden light in the rock face georgous!!
and the reflected light on the water:)

I like that you found a new twist on presenting Horsetail Falls Gary. As you and I have both seen over the past 5 years, Horsetail has become a quest for photographers from around the world. I think everyone (myself included) gets so fixated on the falls when/if that elusive light shows, that they forget about varying the compositions. You had obviously pre-visualized this image and were prepared when the beautiful light arrived. Well done.

El Capitan looks painted up with a red sun shining on it and the snow trimming the pool of water below.....beautiful shot!