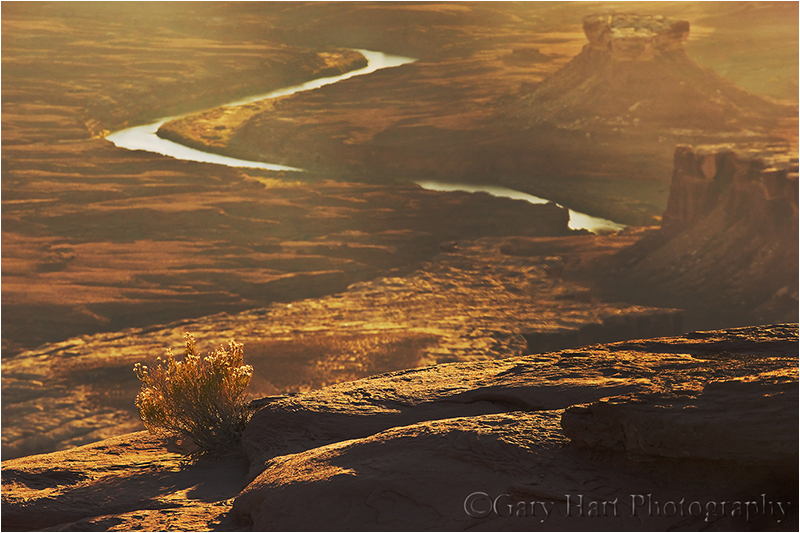 I've written in my last couple of posts about difficult light, particularly the extreme dynamic range caused by bright sky and a darker foreground. The camera struggles to hold usable detail throughout the tonal range, resulting in washed out skies and black or noisy shadows. The options I've offered have ranged from sometimes awkward and arbitrary (the transition never seems to land exactly where I want it) graduated neutral density (GND) filters to complicated and sometimes unnatural digital blending. But I neglected to mention the simplest, most natural solution, which is simply to compose the sky out of the frame.

Last month I meandered the rim of the Green River Overlook in Canyonlands National Park, watching the sun drop toward the horizon and knowing something nice was about to happen. With red rock towers punctuating the distance, and the curve of the Green River that couldn't have been more photogenic if I'd designed it myself, I knew it was just a matter of finding a foreground and waiting for the light.

As the shadows lengthened I found myself focusing on this small flowering shrub, playing with wide horizontal and vertical compositions that included the sun and required a stacked pair of GNDs to hold detail in the foreground. But it seemed like I'd been doing sunset compositions like this for my entire Utah visit, so I decided to try something a little different. I switched to my 70-200 lens and moved back. This allowed me to narrow and compress the scene by bringing the interesting background closer. I moved around until I thought the primary elements (river, shrub, rock tower) were balanced, then lowered myself to my knees to reduce the visual distance between the shrub and the river.

One of my favorite things about landscape photography is the infinite variety of compositions possible for every scene. There were many ways to shoot this, and what you see here reflects my choices; someone else might have handled it entirely differently. For example, many might have wanted sharp detail throughout the scene. But because the shrub and surrounding rock were the prime subjects, I was completely fine with the background river and rock towers being slightly soft. In fact, I like the way that the softness makes the background more about light and shape than detail. Sometimes our decisions are conscious, other times intuitive, and often a combination of both. The key is understanding that there's no absolute right or wrong to these choices, and the way we handle them is a large part of what defines us as photographers.

I like the shot very much and it's a really good choice you did , i like the softness of the background , i think it makes me feel the length and breadth :)( sorry for my english i hope you understand what i mean ;) )

@Babzy: Thanks, Babzy. And your English is fine (certainly much better than my French). :)

a great point of view and a good composition with this rock in the first plan, the light is perfect to me

I love the color. And the photo feels "otherworldly."

sabinche from Frankfurt am Main, Germany

picture of the day!

Great shot. The golden light and the soft background work well. I've been waiting for some Utah captures, can't wait to see more.

Wow Gary! I don't quite know what it is, but this image seems quite different from much of your work- This has such a wonderful impressionistic quality to it. I love that the background is soft and painterly, and the foreground is sharp and detailed. Beautiful work!

@Tracy: Thanks, Tracy. It's probably different because I've never photographed Utah before. :) Seriously, the terrain there is so different from California's, so arid and sparse. I'm usually drawn to vivid color, but the predominant color in Utah is that brick red that turns more sepia in the late afternoon light, and it's pretty hard to avoid it.

excellent tight composition at 200mm - i can see the landscape compressed nicely here, the river seems much closer than it really is... lovely golden colour tone too!

@DarkElf: Thanks, DarkElf--the telephoto is a very underrated landscape lens for several reasons, scene compression being right near the top of the list.

Beautiful image, with fantastic compo, color and tones. I like very much the "blur" in the background.

Very creative work Gary and you can't be a river that makes a perfect s-curve through the distant frame! I also like the clarity you achived on the foreground and the small bush adds balance to the frame! Have a great day!

Really love this, Gary - the lighting is superb! I am taking a break until the New Year, so would like to take this opportunity to wish you and yours a wonderful Festive Season. Take care, and thank you for being so generous with all the tips and instruction over the past year. It's been a pleasure to visit your site, and I'm sure 2010 will be just as, if not more, beautiful.

@dobbino: Thanks, Rob, and Happy Holidays to you too. (Though I still can't get my head around living in a place where a white Christmas means sand and surf.) :)