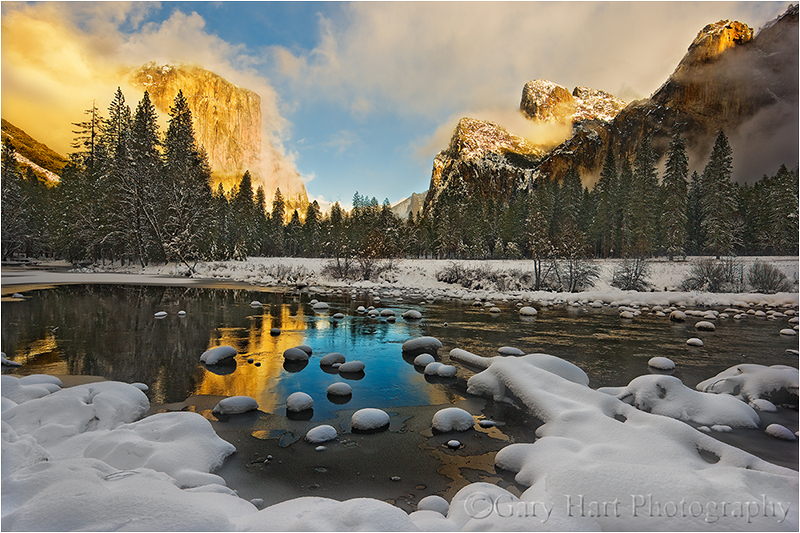 After the Storm, Valley View, Yosemite

If there's anything more beautiful than Yosemite just after a snowfall, I haven't seen it. Snow clings to every exposed surface and dancing clouds create a kaleidoscope of color and light. I'd spent this day circumnavigating Yosemite Valley in conditions ranging from gently wafting flakes to near white-out blizzard, waiting for something like this. I happened to be at Valley View when the show started in earnest, and that's where I remained.

As anyone who photographs here knows, the trickiest part is dealing with the extreme dynamic range created when the clouds and Yosemite's towering granite are in bright sunlight and the valley floor is in deep shade. Sometimes the solution is to compose and expose for a silhouette, but other times the foreground is as beautiful as the distant scene. So what's a photographer to do?

HDR or digital blending would have been one solution, but (as you no doubt know if you read my blog) I like to capture as much as possible in my camera, with a single frame. So out came the graduated neutral density (GND) filters. On this afternoon the dynamic range was extreme enough to warrant assistance, but not so extreme that I couldn't get away with the lighter touch of a soft GND (see my 12/5 post for more GND info).

In general a soft GND works better in places like Yosemite Valley where the shadow/light boundary isn't horizontal. Here I was able to darken the clouds and sky just enough to retain detail and color. But my job wasn't done, and this is where I love digital photography. A common problem with GND use, and you can see this a lot in Galen Rowell's images (Rowell was an early GND user and advocate, before the days of digital imaging), is the unnatural transition between light and dark caused when the highlight/shadow boundary isn't straight and horizontal. But when I processed this in Photoshop I was able to dodge and burn the uneven light (dark places made a little too dark by the GND, or light places not made quite dark enough by the GND) to essentially eliminate any evidence that I used a GND.

In other words, digital post-processing actually makes GNDs easier and more effective. So take that, all you people who think I'm still in the dark ages for eschewing some of the new digital techniques. Here's a great example of combining old and new to get something that would have been much more difficult, or maybe even impossible, by relying exclusively on one approach or another.

One other thing to note when using GNDs--a reflection should always be a little darker than the actual scene. If you end up with a reflection that's as light as or lighter than its original (above water) subject, you need to go with a less extreme GND.

Are GNDs a panacea? Absolutely not--there will always be some things that can only be done by blending images. But I don't think, as many people claim, GNDs should be discarded in favor of blending. Sometimes GNDs simply easier, other times they really are the best way to achieve a natural result.

The golden color is so beautiful - and the blue and gold reflections are stunning. A wonderful capture!

Those hints of colors you captured here are very pleasing to the eyes. You used the correct word when you said kaleidoscope. This image has all but interesting things on all grounds. Snow in the foreground, trees in the midground, and those colors and hints of warm light hitting the top of the mountains. You are not only a great photographer, but your lessons on how to use the proper hardware are so essential for learning photographers like me. Good job!

@Fred: Thank you, Fred. Sometimes the hardest part of photography isn't finding worthy subjects, it's organizing everything into a coherent whole.

beautifully excuted shot. the dynamic range is very precise. the foreground and the background blend so well together. a truly stunning image.

Beautiful image with an amaizing combination of cold and warm colors.

Very nicely done, beautifully exposed with lovely colours and plenty of interest throughout the frame. My first thoughts were 'subtle HDR' but then I read on. Thanks for the explanation!

Nice! I like the yellow and blue reflections in the water :)

This is so breathtakingly awesome! It's like a scene straight from a fantasy world!

This beautiful site is enjoyed by so many every year but you have made it very special by your incredible photo!

Stunning, Gary. The reflections are marvelous. I love the puffs of snow on the rocks in the river. Wonderful low clouds, especially on the right. Very nice essay on the GND. Once I realized all of the virtues of hand holding the filter, I began using it much more. The point about the reflections being darker strikes me as quite important to always keep in mind.

this is such a beautiful shot with the perfect colors

WOW!! This is magic... The reflection was the first that "drew" my attention. The colours are very beautiful.

This was/is such a perfectly timed shot and post. My GND filter arrived in the mail today.
It's been cloudy and overcast, but I look forward to some new photos w/my new filter.
We've only been to this valley once in our lives ... 25 years ago, but the images captured there were exquisite and I'll hope for more now!

@Judy: Thanks, Judy. Yosemite is a magical place indeed. Have fun with your new filter!

Gary a great image and I like that you took this a little earlier when the sun was still touching Cathedral Rocks also - it balances the frame perfectly! Very nice use of the ND filters in a situation where you have no even horizon- as you discussed above!

Thanks, Scott. It looks like you, Don, and Mike got some pretty nice stuff at Valley View last week. I almost pushed this post back a few days so as to not to compete with your images, but finally figured the light and composition were different enough.

a superb composition and the colours are just something else - the gold is just that - pure gold! a great write up on the nd grad filters - something i will keep in mind when i am out and about!

A real gem! The golden tones are stunning!

Filled with admiration for such landscapes and for such photos