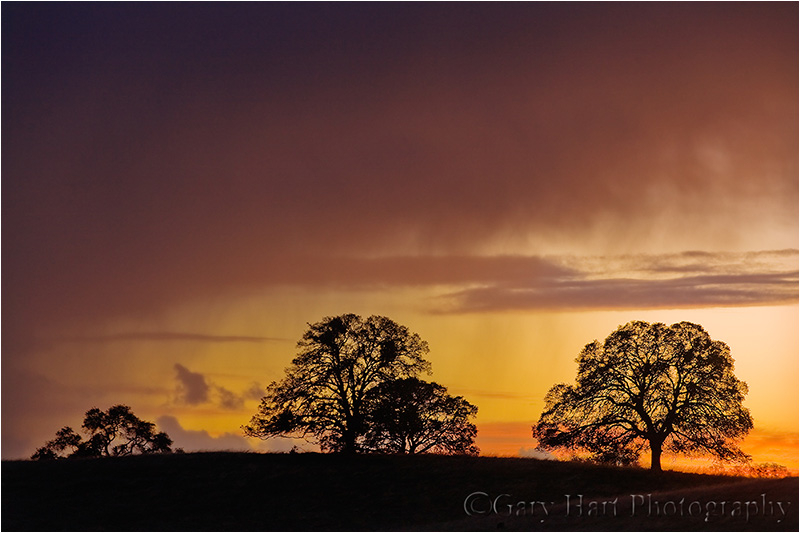 Today's image is the third and final (well, for a while at least) from my drive into the foothills after a storm a couple of weeks ago. The composition is nearly identical to the image in my November 29 post, but as you can see from my exposure settings, they were taken quite a bit apart. This one was just about the last image of the evening, taken as I returned to my car and saw the clouds holding the vestiges of sunset.

Though my three shots from that evening were taken at entirely different times, with entirely different exposure settings, one thing they do have in common is my use of a graduated neutral density (GND) filter to even the light. I fear that the GND is another of the "old school" techniques that's dying with the advent of digital photography. HDR and digital blending (heretofore labeled "blending") are great tools; when applied well they can greatly increase the dynamic range of your images; when applied poorly they have an unnatural look that says "processed."

But regardless of the result, the primary source of my aversion to blended images is simply personal: I love the challenge of capturing my images in-camera, as I did when I shot film. Does this make me old-fashioned? Absolutely. Does this make photographers who embrace the new digital techniques less skilled or qualified than me? Absolutely not.

Don Smith, my good friend and fellow landscape photographer, has been photographing professionally for over 30 years, yet he readily embraces the new techniques when they're appropriate, and taps his vast film photographer experience when it best serves his objective. Don's results, though sometimes different from mine, are no less successful, and in fact he's often able to capture things that I can't.

Which is better? Neither. But one thing Don and I have in common is our prime motivation to satisfy our creative instincts without concern for what others think. In other words, we don't shoot to please or impress others, we shoot to please ourselves and both of us feel very fortunate that the images that make us happy seem to make others happy too.

That was a very long prologue to my original objective, which is to discuss GNDs and how I use them. First, for those who are scratching their head, a GND (graduated neutral density) filter is a transparent glass, resin, or plastic rectangle, clear on the bottom and darker on top ("neutral" means it doesn't alter the color or any other aspect of the scene but the light), with a graduated transition from light to dark. A "hard" transition is abrupt; a "soft" transition is more gradual. The key to their effective use is hiding the transition in a part of the scene where it won't be too obvious.

In my bag I have three GNDs: a 3-stop soft, 3-stop reverse (darkest near the transition point and useful when the brightest part of the scene is near the horizon, as with a sunset), and 2-stop hard. In extreme dynamic range situations I sometimes stack more than one filter.

Some people use a holder that screws on to the end of their lens; I find these cumbersome (and they often cause vignetting at wide angles) and just hold my filter in place with my fingers (taking care not to get my fingers in the image). The filter(s) I use for any scene (2 or 3 stops, hard/soft/reverse, stacked) depends on the scene's dynamic range, and the place I think is best to hide the transition.

In today's scene I wanted just a splash of golden light on the hillside, but capturing color in the sky would have turned the hillside completely black. Because the transition from light sky to dark hillside was pretty abrupt, I pulled out my 2-stop hard GND. I placed the transition along the top of the hill, and dodged and burned in post-processing (a digital doff of the cap to an ancient darkroom technique) to further disguise the GND transition.

Since I've rambled on so long already, I'll stop now and in a (near) future post talk a bit more about how how I decide when to use each GND type.

sabinche from Frankfurt am Main, Germany

I love this oak-silhouettes composition... so relaxing ! Well done :)

Very nice, Gary. I have a 2 stop Singh Ray soft GND filter. You are inspiring me to add more to my arsenal before we go out to Death Valley in January. What would you add to your bag if you are starting where I am?

@Barbara: Thanks, Barbara. I'd add a two-stop hard next, and don't be shy about stacking both of them when the situation dictates. In general I find the hard transition GNDs more effective, and the soft more versatile (I can use them in more situations). The soft filter may serve you better in Death Valley, at least when we're in the valley itself, because we're in kind of a bowl, which means the light/dark area's of the frame aren't on the same horizontal plane. But when we get up to the rim at Dante's View and Aguereberry Point, the transition from light sky to dark mountains is pretty horizontal, making the hard transition easier to hide.

The light is gorgeous. Outstanding silhouettes (which I dearly love). The tree on the right looks like lace. You and Don are new mentors for me. Sometimes when I don't comment, it is because of the lack of superlatives.

@john4jack: Thanks, Jack, I really appreciate hearing that. Don and I both love teaching almost as much as we love taking pictures, which might explain why our workshops have been so successful (and it doesn't hurt that we go to beautiful locations too).

wonderful composition and light - great follow up to the one you posted a few days ago! love the darker shades here and silhouettes are still fantastic! interesting comments about the grad filters - i am learning to use them and hope to give them a good go in the near future...

I like Jack's comment about lacking superlatives ... when shots are routinely beautiful, it's difficult to find words.
However, your lessons are most appreciated ... and GND lesson is a good one!

Beautiful image, with fantastic soft light and colors. I liked the explanation on the use of GND filters, thank you for having it shared.

Exquisite! I have heard about GND filters, but never used it before - for that matter I hardly use any filters; purely because of a lack of knowledge I’d say. Thank you for the explanation - you've got me totally excited about filters now.

Gary, I always enjoy reading about the story behind the image and appreciate your skill in being able to do this so well.

First off Gary, another beautiful image. I agree with your narrative 100%. I also wish at times I would be more diligent in using my GND's. The less time spent at the computer the better, and there is a certain satisfaction of capturing a completed image in-camera, similar to how we did it when shooting chromes. I have had success with the layering techniques I teach at our workshops, but the drawback is they are time-consuming. On the other hand, it is nice to have options available. The end result, as you have said, should be in creating a pleasing image that hopefully succeeds in making an emotional connection with the viewer.

@Don Smith: Thanks, Don. I agree completely, and would bet that if Ansel Adams were alive today he'd have thrown out his GNDs and gone to digital layering entirely. And really, digital processing makes GNDs more effective because it's so easy to dodge/burn to smooth the transition. I spend a lot of time picking at poorly executed layering, but GNDs can misused too. The most common problem is a poorly hidden transition. And in a recent workshop I had a guy who took some gorgeous pictures, but he was too heavy with his GNDs and ended up with a sky darker than his foreground. I'll be talking about this in my next post.

Thanks for all the great tips- both in the post, and in the conversation- I always learn something I had never thought of before!

These winter storms provide the most fantastic light! Wonderful composition and use of the ND filter! Also great timing and work on this Gary! I always enjoy the clarity and light in your images. Have a great weekend coming up.