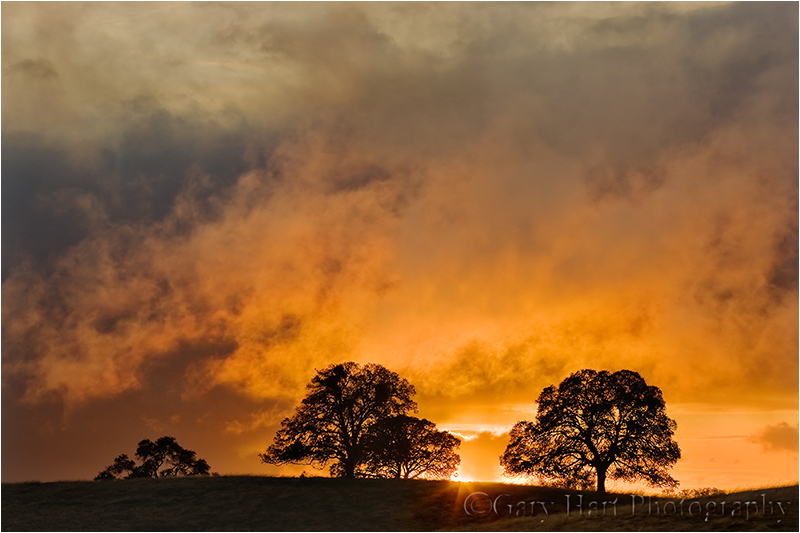 Another image from my spontaneous foothill foray last week. It had stormed most of the day and I thought the conditions looked promising for a nice sunset, so I grabbed my camera and made for the foothills. As the sky started to light up I pulled over near a tree-topped hillside and went to work.

I could tell that the sun was going to pop out from behind the clouds just before it dropped below the horizon, a great opportunity for a starburst. Capturing a starburst requires a small aperture (at least f16) and a brilliant point source of light. But when the sun is in an area of the sky that's mixed clouds and clear, sometimes it's difficult to tell the best time. So that evening I tried several frames to be sure I nailed it.

But anyway, that's really what's on my mind right now. I'm doing an art show this weekend and it's always fun to watch and hear people's reaction to my images. I shoot with large prints in mind, so it's always fun to display my prints, and gratifying to know that they're genuinely appreciated by others. But I also occasionally get the "Is that the way it really looked" question (if you've been following my blog you know the answer is "No!"); I wish I could just send everyone who asks that question to my August blog series. But since I can't, I simply give them as much of the abridged version as I think they can understand.

It's unfortunate that the credibility of digital photography has been damaged by the digital photographers who abuse the post-processing tools available to them--sometimes they're simply fixing problems that would have been better addressed in the field; sometimes they're "improving" the original image with flashy filters and effects; and sometimes they're just plain deceiving (for example, by inserting a moon or rainbow where one didn't exist). Regardless of the motive, it seems that the viewing public has become dubious of all things digital.

But the fact is, digital photography is here to stay (for many reasons), and we'll all benefit by a consensus on the definition of ethical image processing. To me the key is to not deceive. The rule of thumb I try to apply is to keep my creativity in the capture--I'm a film shooter at heart, and while I acknowledge that digital makes many things much easier, I don't really want to do (and in fact get no pleasure from) anything that wouldn't have been possible with film and a darkroom. But then, maybe I'm old fashioned....

Lovely composition and colors ! What a relaxing view !!!

Very nicely done, your instincts were spot on and your processing restraint is also to be admired.

I'll support your "old fashioned" approach, Gary, and continue with my minimal sharpening and occasionally a dodge or burn in an area. God still provides the master's touch ... and gave us the eyes to see the beauty.

This sunset, viewed peeking over the ridge and the three silhouetted trees is wonderful!

WOW!!! Magnificent!! I love the colours and silhouettes. Well done

great work here - the fiery golden sky is amazing and your composition is perfect! i think there is scope for both the "old fashioned" and the "digital" approaches... photography expressing is each individual's own vision and there will always be people who like one way better than the other... i see no need to fight over it, just try to understand and accept where each individual is coming from in their art and what they are trying to present... i like your photos for what they are in the first place and also appreciate your technique to get there - and as long as the results that you are presenting are your own vision then keep up the great work!

@DarkElf: Thanks for your kind words. I agree that photographic expression is very personal. The "rules" I post in my blog are mine alone and I have no problem with others applying their own rules as long as they're honest.

Such a glorious color in the sky.

Amazing yellows and oranges in this Gary! Jaw dropping!!

As always Gary, your work inspires me, and I always learn so many things from your blog. It somehow seems that you always have a timely lesson for what is happening in my own photography at the time! I had my first shooting assignment for a client last week- to shoot a school garden and kids for a fundraiser. One of the comments made to me by the client was- "Well, you'll have to Photoshop out the dirt on the kids hands!"
I think that many folks think that Photoshop is a magic wand that you can just wave over an image and make it perfect! To me dirt, gardens and kids hands all go so well together, that I ended up leaving the dirt right where it was!--there was way too much to try to "fix" anyway...besides, if it was so important they could have had the kids wash up first! Oh Well! Live and learn :) ( I'll have to wait and see how the client likes the images!)

@Tracy: Thanks, Tracy. And I couldn't agree more with your observation that people (including many photographers) perceive Photoshop as a magic wand. Congratulations on your shooting assignment--I'm sure the client will love the images.

Gary, I tend to agree with your thoughts on how to take or present digital photos with integrity. Doing with them nothing that couldn't also be done in the darkroom is a good rule of thumb. All I would add is that I have no problem working with computer programs to produce things outside of what a range of normal would be - but being open and up front about what comes out. I don't like inserting things that aren't "there" in the original, no matter how much you wish it could have been otherwise. But if it is done, then I believe the photographer has a moral obligation to say so. I can live with that.

@Viewfinder: I agree that full disclosure in photography is essential. And I also think my definitions are more personal than universal, but to me photography is about what happens in the camera; if Photoshop becomes part of the creative process (not that there's anything wrong with that), it ceases to be just photography. Of course you could argue that much of Ansel Adams' work was outside the camera, but he photographed in a time when the camera and darkroom were inextricably merged. And I think the rules are a bit different for black and white. I've always shot color and therefore have always had to accept what the camera gave me--capturing an evocative image with those limitations is a huge part of photography's joy for me. I am certainly not disparaging Photoshop or Photoshop users--it's an essential part of my workflow, it's just not part of my creative process (and I so resent those photographers who present clearly enhanced images as "just the way it looked").