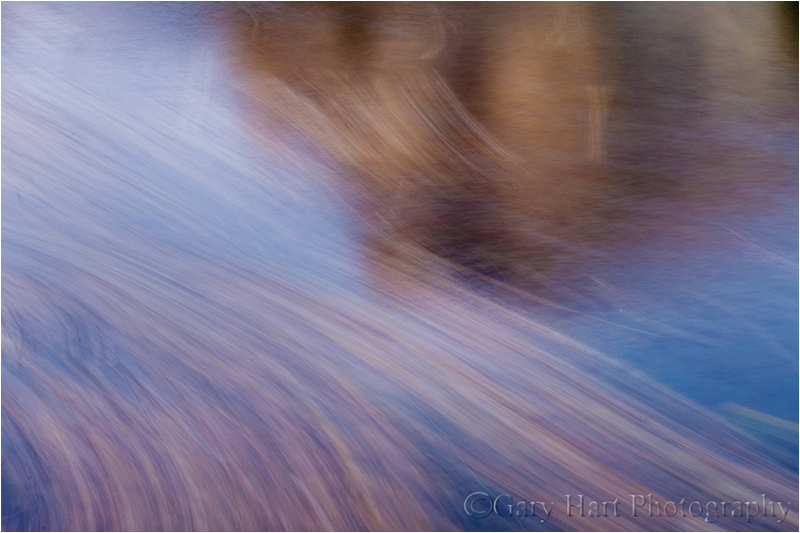 More fun stuff. I say I like creating unique images and often lament the difficulty doing that in the heavily photographed areas I frequent, but I'm pretty sure you won't find too many Half Dome pictures like this. If nothing else, it serves as a reminder that the possibilities are limited only by my imagination. It also makes me wonder what other unique views of iconic subjects are still out there....

I want my creativity to be in-camera and not in my processing. That doesn't mean that I refuse to take advantage of Photoshop--a few basic Photoshop tools (curves, dodge/burn, unsharp mask) are essential to the refinement necessary to complete an image. And in fact, every image, film or digital, is "processed." Ansel Adams was a notorious port-processer, before capture visualizing not only the scene before him, but also the darkroom processing he'd do to achieve his desired result. But the foundation of his images was his elegant, creative, simple (I could go on) compositions.

Lately I've become aware of the number of times my first thought of someone else's image is, "Wow, that's beautifully processed." I say it with genuine admiration, but it has dawned on me lately that maybe this isn't what I want people to think when they see my images. In "The Art of Fiction," the great teacher of writing, John Gardner, spoke of creating a "vivid and continuous dream" his for readers. His point was that as soon as the reader becomes aware of the writer, he or she has been awakened from the "dream" on the page, and the writer has failed. I think this applies in photography: I'm trying to create a world for my viewers to get lost in; when they become aware of me, the photographer, I've lost them.

Abstract as it may be, this was actually a very simple composition and capture that required very little post-processing. I was standing on the bank of the Merced River, working with a private workshop client; as he became lost in his camera, I watched the leaves drift by in the diminishing twilight. The sky behind Half Dome was that steely blue tinged with magenta that appears opposite the sun 15 or 20 minutes after sunset. I simply used a long exposure to bring out the sky color in the reflection and capture the movement of the leaves.

Wonderful light movement and emotion...you have succeeded in imaging Half Dome in a way that is unique to you !

Nice abstract image. Enjoyed reading your text and I share the same opinion. I also always try the minimum processing in a image. I have nothing against "hard" photo processing, i like it, and as I understand it as an art form with beautiful results..

I was 'aware of the photographer' only in that I wanted to know what I was looking at. After reading your text, the abstract art of this just pops with emotion (and motion).
Happy Thanksgiving!

You know I heard row row row your boat in my head as I saw this, you know the part where it says "gently down the stream" and "life is but a dream"? I say you captured it perfectly!
Oh and Happy Thanksgiving!!

Very well done. Until I read your post, I thought it was a long exposure on a stream. Thanks for the explanation!

this looks like so much fun! I have to try it! fabulous work! :))

"In "The Art of Fiction," the great teacher of writing, John Gardner, spoke of creating a "vivid and continuous dream" his for readers. His point was that as soon as the reader becomes aware of the writer, he or she has been awakened from the "dream" on the page, and the writer has failed. I think this applies in photography..." Bravo! This is what I am trying to say when talking about each good photo having its own story to tell.

Gary,
I like this very, very much! Reflection and long exposure just lovely!
Kelly

I could repeat my comment....Something that make me want to paint!!!!

My favorites on AM3 - MESMERIZING by Maria