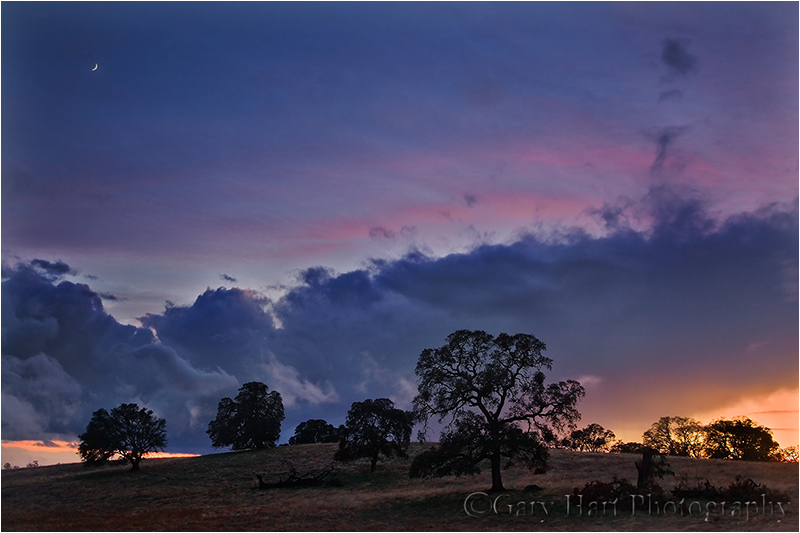 Last Friday the weatherman promised a cold storm for Northern California, hinting (strongly) at snow in Yosemite Valley. Normally this kind of news gets my mind racing as I try to reorganize my schedule to accommodate a Yosemite trip. But given the theme of my recent posts (icon overload, trying not to duplicate what has already been done), I decided to stay close to home.

Home for me is in the shadow of the Sierra Nevada, so my options were many. Tahoe is 90 minutes away, but I don't usually have to venture that far to find worthy subjects. Possibilities closer to home include the Sacramento and American Rivers, the Delta, and the Sierra foothills. And 90 minutes west is the Pacific Ocean. Decisions, decisions....

The storm came through late Friday morning, and by mid-afternoon serious clearing was underway. But I could see the foothills to my east and south were still shrouded with clouds. At around 3 p.m. my camera and I headed for the hills with no particular agenda beyond landing someplace nice for sunset.

Open spaces and oak-studded rolling hills make Latrobe Road between Highways 50 and 16 my go-to foothill route. And as it turned out, on Friday night Latrobe Road also marked the boundary between (mostly) clear skies and the accumulation of cumulus clouds that often push up against the Sierra after a storm. With sunlight to my west and clouds overhead, things were shaping up quite nicely for sunset.

I explored the hills in the waning light, searching Latrobe Road and a few obscure tributary roads for the perfect scene. I'd love to say that I chose this location for some special quality that set it apart from all the other options, but honestly, it's just where I happened to be when the light got good. My original intent was to shoot here for a few minutes then move up the road a bit to see what else I could find. But, as often happens, the longer I stayed, the more compositions I found. Of course it didn't hurt that the light and sky were gorgeous.

Alternating between wide and long lenses, I wandered up and down the road to change the relationships between the clouds and the trees on the hill. At 40 mm this is a fairly wide composition, which should give you an idea of how close the bank of clouds was--probably no more than a quarter of a mile distant. Close proximity to clouds like this gives you a great perspective on their dynamics--in a matter of seconds a wisp would appear, scurry across my frame, and plunge into the gray mass behind or dissipate entirely. When the light hit them right they'd glow with whatever color was in the sky.

Initially the clouds covered the sky overhead, but as the sky darkened the clouds above me parted to reveal a thin crescent moon. This was an unexpected bonus, as the best day to photograph the crescent at sunset had been two days earlier. But while the moon was too high to be the major focal point, it added a perfect accent to an already breathtaking scene.

A final thought on the processing of this image. As you can see by my exposure settings (2 seconds, f11, ISO 400), it was fairly dark by the time I took this. But shooting toward the brightest part of the sky when the rest of the scene is fairly dark creates problems because the range of light far exceeds the camera's ability to handle it. HDR (high dynamic range) or manual blending of multiple images would have worked, but as many of you know, I'm still a film shooter at heart and am not a fan of the amount of processing digital blending requires. Instead I used a 3-stop soft graduated neutral density filter (Singh-Ray, if you must know) to hold the color in the sky and allow just enough foreground detail.

Great shot , the first tree has got the appearance of lace !

Nice image, the composition is beautiful, with a nice balance between the sky and the foreground. The cloud gives a nice dramatism to the image.

Nice image, the composition is beautiful, with a nice balance between the sky and the foreground. The dark clouds give a nice drama to the image.

Lovely colours here...and I particularly love the crescent moon. I couldn't help but notice it right away!

Just stunning, Gary! The colors and the cloud formations give such a feeling of great depth in this! The little crescent is like an exclamation point at the end of an emphatic sentence!

@Tracy: Thanks, Tracy. I like the way you describe the crescent. :)

Lovely image yet again - and you captured your moon! And I think that the way you have done this gives a truly natural look to the image - unlike one that has been processed with HDR. Your information on the neutral density filter is food for thought - will have to investigate.

@dobbino: Thanks, Rob. If you want to give graduated neutral density filters a try without a big investment, try Cokin. But if you want to be serious about it, get Singh-Ray. Cokin really isn't very good (scratch easily, not truly neutral), but it's a cheap way to figure out if GNDs will work for you.

5 stars! Wonderfull!!! I love the colours. Great lighting - no detail was lost in the foreground. The moon simply adds that final touch - I love it. Very well done :)

A beautiful image Gary and - this looks a lot like the hills near my home also! Fantastic clouds and sky and I think the moon adds the perfect sense of balance for the entire composition! Make sure you give me a call when you are in the area for your interview!

@Scott F. Schilling: Thanks, Scott. I'll be down in the Hollister area on December 1 to meet with Don and Uwe.

This is beautiful, Gary ... so soft, but with lots of detail.
Thank you for your comment on the Singh-Ray vs. Cokin GND filters ... food for thought.

Excellent composition! These colors are gorgeous and the ominous sky running right through the center of the photo carries your eyes across this whole beautiful shot!

Gary, you did a great job of capturing this. I am glad that you are on the alert and able to hop in the car and go when a storm comes. I was on jury duty last week during the storm here in Oakland - not even a window. Your diligence has paid off in a lovely shot and the grad really did help.