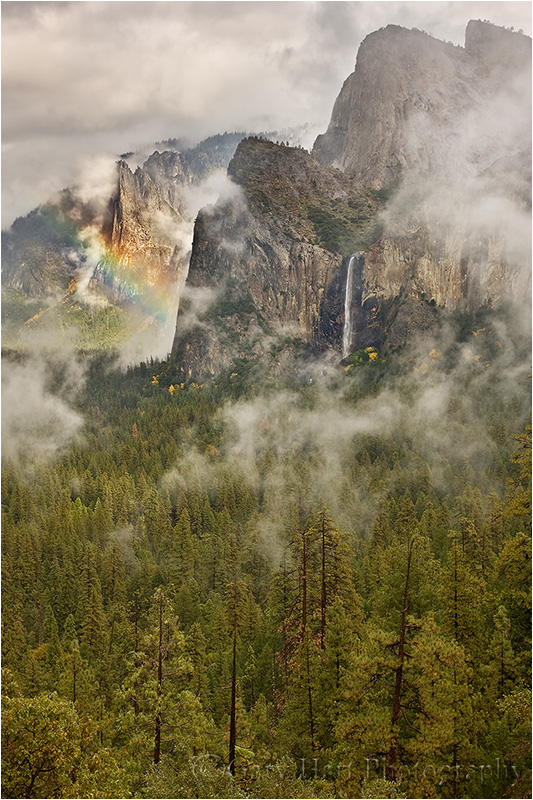 My previous post described a rather unexpected rainbow and the panic shooting that ensued when my group saw it. Successful landscape photography is all about finding the best light, but success comes easier the more you anticipate rather than react.

The day after the unexpected rainbow I was guiding a private group around Yosemite in the rain. They were real troopers and I promised them that if they just held out we might be rewarded with something special. We were down the Merced River Canyon a bit, photographing Cascade Fall, when I noticed the sky lightening. I quickly rounded everyone up and we headed to Tunnel View. We arrived just in time to witness the first post-storm shafts of light deliver a partial rainbow to Yosemite Valley.

<I'm off to Yosemite and then Southern Utah and will have very little Internet access in my absence.>

This is a very lovely, ethereal and "feeling" image.

This is magical, mystical, beautiful. If a place can be spiritual, you have perhaps found it and brought back its portrait.

Delightful image - and I absolutely agree with what you say about anticipation. Not everyone has it - I think you got more than your fair share coming down that conveyor belt :)

Just sperb. I love this photo.

WOW!!! This is breathtaking!

Another majestic image after yesterday's ... hope your ankle is okay!

Wonderful - you have a magic touch.

Wow... a capture you can only dream about :)

Hey Gary, I can safely say I'd be making this response to everything you click your shutter at: MAGNIFICENT! When it comes to your Yosemite photos (a super saturated photo subject in the marketplace), yours are NOT an oh-hum-just-another-Yosemite-picture. I've always had a high regard for Ansel Adams' works, albeit in black and white. But I think with Gary Hart on the scene, Adams will have to retire to a back seat! I'm proud to call you my nephew. And, yes, I think your dad is hovering nearby, nudging your camera in breath-taking directions.
Love, Uncle John

@John Emerson: Thanks so much for your kind words, John. Yes, Jay and I comment sometimes that Dad is watching us, and maybe even pulling strings in our behalf. His love of Yosemite and photography was no doubt the catalyst to my career--I'm only sorry he's not here to enjoy it with me.

Gary, this is a P.S. to my previous comment: You are not only a terrific photographer, but your narratives are very well written. You really need to publish some books that contain both your photos and your narratives.