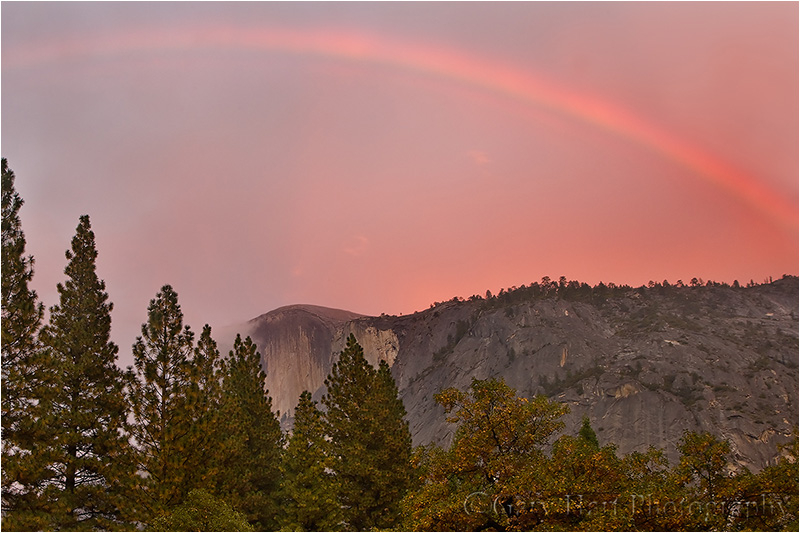 It's hard to know where to begin with this image from the last day of my just-completed Yosemite Fall Color workshop. I'd taken my group up to Mirror Lake to finish the day. As we prepared for the one mile hike, a day of mostly blue skies had started to turn gray, but nothing terribly threatening. With no rain forecast we didn't even consider donning rain gear. I had several people with limited mobility, but one had a handicapped placard that enabled us to take a vehicle on the service road to the lake. The rest of us had to walk, but that was fine. For me half the attraction of Mirror Lake is the trail that parallels Tenaya Creek and offers a wealth of forest, fall color, and creek compositions.

By the end of the workshop people are usually feeling pretty independent, so before we embarked I gave everyone a time to meet at the lake and encouraged them to seek their own shots. I instructed them to hail me or Doug, my assistant photographer, if they needed help (I like everyone to remain within earshot at all times, but with cell reception I'm somewhat more comfortable if people want to stray a bit more). Several of us ended up photographing the creek in a dense forest, while Doug moved toward the group at the lake a bit faster. I eventually crossed the creek on a log and was caught up in a scene when the first raindrops stirred me from my reverie.

The rain was coming down pretty good when I made it back to the log and realized I had a small problem. I'd taken for granted the log's downward slant on my trip across, not fully appreciating how the slope made it easier to maintain forward momentum that aided my balance. But the return trip was uphill, requiring one deliberate, teetering step at a time. As I approached the middle of the log, tripod and camera in hand, I realized I had a new problem--the log's surface, dry on my initial trip, was now slick with rain for my return trip. At this point the log was a good three feet above the water's surface, preventing me from using my extended tripod as a third leg for balance.

I took a step and almost lost it, gyrating frantically before regaining my balance. The frigid water was moving fast but appeared fairly shallow, so my concern was more for my comfort than my life. Nevertheless, I really didn't want to fall in. I took a deep breath and tried one more step. This time my foot couldn't find a grip and I knew gravity was going to prevail. Rather than resist the inevitable I pivoted and pushed off. Lifting my tripod high above my head I entered what turned out to be four feet of water vertically and pretty much under control--picture Kerrri Strug nailing a landing at the '96 Olympics. The Strug analogy really works because as I popped out onto the shore it was pretty clear I'd sprained my ankle.

Wet to my waist, cold, and limping, I was still trying get my bearings when my phone started ringing. It was Doug calling to tell me the people at the lake, suddenly missing rain gear, were ready to pack it in. It was 15 minutes before sunset and normally I'm the last person to let a little rain defeat me, but somehow that didn't sound like such a bad idea. I could feel my ankle swelling and was most grateful that we had a vehicle.

With more people than seats, I sent the car down with its original load and rode back with the second group; with a few minutes of photographable light remaining, some decided to walk back. In the parking lot the rest of us waited for the stragglers and I tried to figure out how to stay warm. That's when somebody thought to look skyward. It was sunset, rain was still falling, but the day's last rays had penetrated the clouds, bathing Half Dome in red and framing the scene with a rainbow. Unfortunately most of the view was obscured by trees, and our cameras were already in the back of the vehicles. We went from 0-to-60 in five seconds, frantically grabbing gear and searching for better vantage points. It's amazing the anesthetic qualities a rainbow possesses. I instantly felt no pain and moved about freely before finding this spot with half of Half Dome revealed in a small gap in the trees (any further to the right would have put the sky behind the branches of a towering fir, and moving forward would have lost Half Dome to the foreground trees). The rainbow faded quickly, but the color hung in there for at least 10 minutes. Soon we stopped shooting and just watched.

Circumstances that evening caused me to violate one of my firmest rules, to never give up early just because it looks like nothing's going to happen. But, while this may not have been the location I'd have chosen had I known there was going to be a rainbow, I'm pretty happy to have gotten my group something pretty special.

Epilogue: It rained again the next day. I was guiding a private group and they hung in there through some pretty miserable conditions. When things started to break mid-afternoon I high-tailed it up to Tunnel View and was able to reward them with a nice little rainbow between Half Dome and Bridalveil Fall. Life's good.

This rainbow is all the more breath-taking after reading your sometimes harrowing and suspenseful story of your last day's experience at Yosemite. Thanks for the vicarious adventure !! ;-)

Mirror lake was fantastic last week after all the rain - sounds like you had a great workshop: congrats!

What a story Gary! Due to similar circumstances, I always carry a towel and dry clothes and shoes in my car wherever I go!
Coming soon on my blog I share a similar story--but without the rainbow!
Beautiful image, too and I am glad you were not seriously hurt!

Amainzing photo. The colors an the rainbow are just fantastic.

This is just unbelievable - and worth the sprained ankle! Gary - it's gorgeous! Hope the ankle gets back to normal soon.

@dobbino: Thanks, Rob. Right now my ankle is more colorful than the sunset. I'm able to walk without trouble, but it'll be awhile before I can start running again.

A magic rainbow! Wonderful light and colours. Your story make it even better

all you adventures make these photos all that more special! this is a lovely one too! love the pinkish tones and the arch of the rainbow forms a great line for the eyes to follow...

would color even exist without rain?
it's beautiful gary. awesome to behold.

This is a lovely composition, I like the pink in the sky and the hint of a rainbow - it's a bit different from the classic rainbow shot. I hope your ankle is a bit better - it was brave of you to go out like that the next day!

@Elora: Thanks, Elora. You may call it brave, my wife called it something else.... :)

This is such an outstanding compostion! Love how the colours of the rainbow make their way through the pink sky. So lovely.

What a story , it makes me apreciate more the beautiful rainbow !

Wonderful colors and I like this rainbow as it stretches wide! Sorry to hear your sad story and hopefully you can recover with Don on the way to Utah!