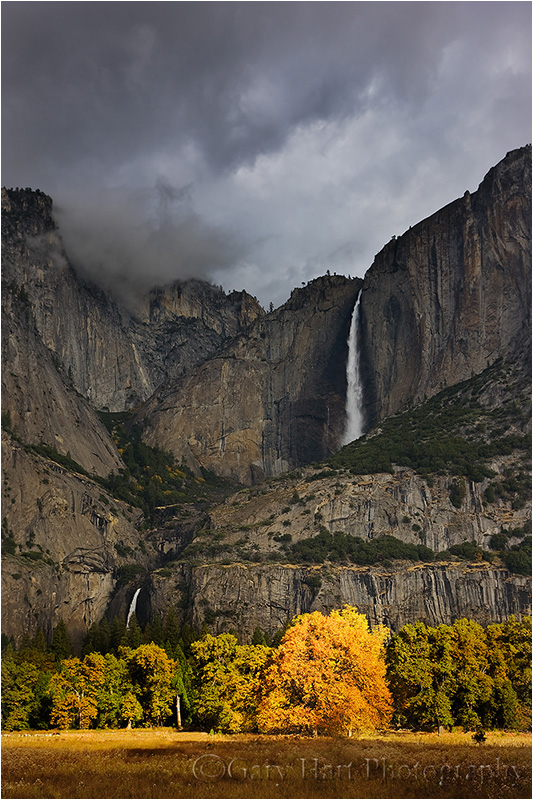 Cook's Meadow is a particular Yosemite Valley treat, offering views of Half Dome or Yosemite Falls with this majestic elm in the foreground. The tree is best in fall, when its vivid gold leaves add even more drama to an already breathtaking scene. Unfortunately, this beautiful color comes when Yosemite Falls is bone dry, robbing tourists and photographers of an opportunity to see both--it's almost always one or the other. But last week an early storm descended on the park, depositing over five inches of rain in 24 hours. Literally overnight all of Yosemite's waterways transformed from their usual fall lethargy into full spring flood mode.

On the eighth and final day of my most recent trip I was guiding a group in a one day private workshop. I like to get people to Cook's Meadow an hour or so after sunrise, just as the first rays of sunlight reach the valley floor. But on this morning another storm threatened and I wasn't sure I'd get any light at all. When I arrived the sky was mostly a heavy gray, but occasional breaks in the thickening clouds delivered occasional fast moving shafts of light to random parts of the valley. Hopeful for light on the tree, I metered an ephemeral patch of light on a slab of granite and waited. Minutes later I held my breath as a beam of light streaked across the valley floor, for just a few seconds illuminating the elm and surrounding grass. I had time for one frame before the hole closed and the light disappeared.

Another super shot Gary. I've had a good hunt through your blog and have found your work to be highly inspirational - a real pleasure to view. I also find your insights most enlightening. Thanks for your posts and great information.

@Stu: Thanks, Stu. I spend a lot of time on my posts and it's nice to know that people take the time to read what I say.

Absolute perfection. Couldn't have been better timed to catch the yellow leaves at the toe of the falls.

Absolutely brilliant - the patience and the resultant photo!

Amazing. I just love the cloud clinging to the cliff. To me that's the most magical part of the image (maybe it's just because I like clouds!)

It's always "the next day." lol

Wow, again another amazing scene! I like your work, some of the photos are really breathtaking!

Having just been there three weeks ago with Phyllis and knowing how bone dry everything was, I can't believe how quickly the falls form! Wow! Great shot. Janice

Wow! what a impressive picture.The landscape is really breathtaking!

Fabulous light. Timing in so many ways makes all of the difference in the world.

superb composition of this amazing scenery! lovely light too - the transition from grey tones at the top to rich and warm yellows below is fantastic as the eyes follow the waterfall all the way down...

This is one of those incredible moments that one can spend a lifetime and never see again. The elm tree looks to be at peak fall color, and with the waterfalls booming at spring speed, it makes for a surreal image. And oh yeah, just when you think it can't get much better, you get some nice storm clouds hanging around the top of upper Yosemite falls. Great work Gary!

Stuning photo and momment. The light and colors are fabolous

One beam of light and one frame is just enough! Superb capture of this beautiful scene. The composition is stunning. Excellent work.

What a treat! There is sure no substitute for being prepared!