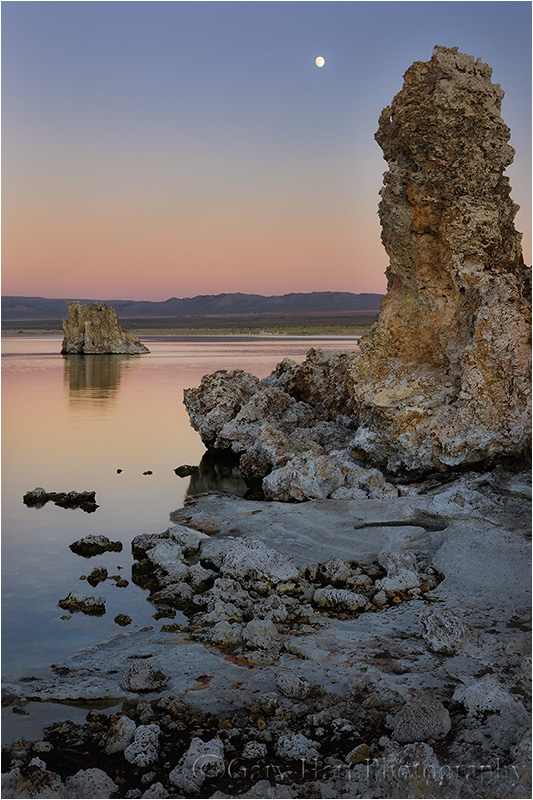 In this year's first Eastern Sierra fall workshop we watched a cloudless sunset at Mono Lake's South Tufa. Normally a sunset without clouds is a recipe for disappointment, as it's clouds that make the sky interesting. But this evening we had a couple of things going for us: first, the utter calmness of the lake (not nearly as common at sunset as at sunrise) gave us beautiful reflections; and second, we had a waxing gibbous moon rising in the eastern sky.

When we arrived that evening the South Tufa parking lot was jammed. At the lake photographers of all inclinations, from point-and-shoot tourists (not that there's anything wrong with that) to Gitzo-toting zealots, occupied every square foot of worthy real estate. I advised my group to be patient and use the time to scout scenes and plan compositions. I assured them that by the time things got really good most of the other photographers would be taillights down the road.

My group was dubious, but experience has taught me something so many other photographers haven't seemed to figure out (this will be our secret, so please don't tell anybody): On these cloudless nights the best light comes after the sun goes down. After sunset the eastern sky takes on a soft glow that transitions from pastel pink at the horizon to a soft blue overhead (I mentioned this in my previous post too), deepening with the encroaching darkness. Not only that, this color is caught by every reflective surface in the scene. And as if that weren't enough, because the light is reflected from the sky, shadows vanish, creating a wonderful opportunity to capture the full range of detail a camera normally can't see.

Without the moon in your frame, with a tripod you can keep shooting even 30 minutes after the sun disappears. Since I think getting detail in the moon is important (rather than rendering it as a glowing white disk), when I include the moon my window of opportunity closes maybe 15 minutes after sunset. But that's still plenty of time to capture it in the beautiful twilight glow.

Many photographers think the moon needs to occupy a large part of their frame and reflexively twist on their longest telephoto to photograph it. But I love using the moon as a simple accent to an already beautiful scene. I often go wide in these situations, composing for the foreground and letting the moon's significant visual weight (despite its small size) anchor the sky.

A treasure of an image. I was interested to read all the background info, too.
That is a thoughtful and helpful service to those who care to read.

@Dulcie: Thanks, Dulcie. This blog satisfies my two strongest creative drives, photography and writing--it's nice to know others enjoy both aspects of my contribution. :)

Beautiful composition, with a great light and DOF.

Absolutely lovely Gary! I have noticed these pink colours in the sky a lot as well, and have always found them to be the best part :)

Such a peaceful, calm scene. Just beautiful! Thanks again for the educational commentary.

Did you clone out the Winnebego?

Very Nice Gary! When I was there a few weeks ago, my best images were taken 30-40 mins past sunset. This also works, prior to sunrise as well.

i agree with you - a glimpse of the moon is subtle and more effective - what a magical shot! thank you for sharing!

Beautiful capture. I love the colour tones in this picture.