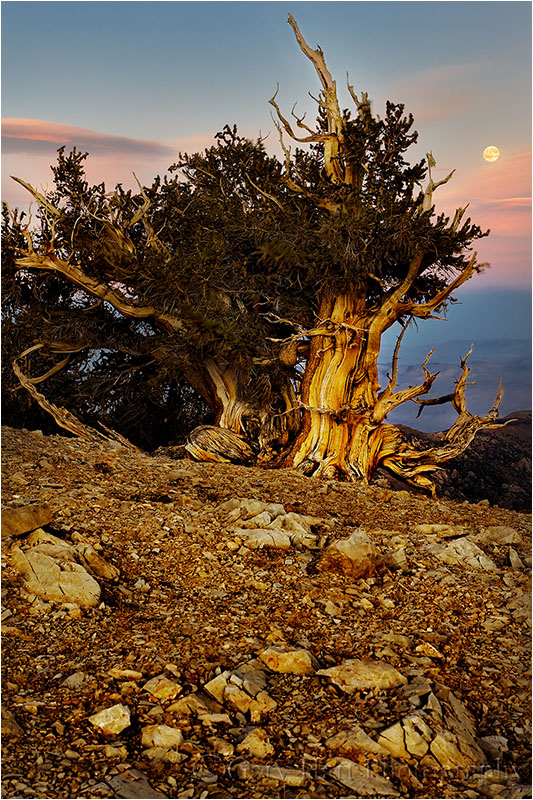 I'm back from two great Eastern Sierra workshops and still a bit wiped out. Nevertheless, I thought I'd share with everyone a couple of images from my trip before I head out to Yosemite next week. (It's that time of year.)

On the afternoon between my two workshops I met my friends Don Smith (who would be assisting me in the second workshop) and Mike Hall. Knowing that the full moon would be rising in the east at sunset, we decided the Patriarch Grove in the White Mountains east of Bishop would be a great place to be. Never mind that the grove is over 11,000 feet, at the end of a 90-minute carsickness-inducing drive, the last 12 miles of which are on an unpaved road.

Driving into the Whites we saw clouds in the east that we feared would obscure the rising moon, but decided to continue. At the grove we were greeted with frigid cold and 40 mph winds. We saw nothing to indicate the clouds would clear. Nevertheless, we grabbed our tripods and headed out for the short hike to the top of the ridge in the heart of the grove. Once there we spotted a distant ridge that we thought might have even better potential and headed out cross-country. The view from there didn't disappoint, but its complete exposure offered nothing to shield us from winds that were so strong we couldn't leave our tripods unattended for fear that they'd topple (I saved my tipping camera at least once).

While the clouds blocked the eastern horizon, they also made for some great photography and we quickly split up in search of our own compositions. The light on the west side of the ridge was great and I concentrated my attention there. A few minutes after sunset I heard Don shouting like he'd been attacked by a bear and raced to the east side to see what was up--while I couldn't understand his words in the strong wind, and saw no bear, I looked to where he was pointing and saw the leading edge of the moon peeking above the rapidly thinning clouds. I hailed Mike and for the next 60 seconds the three of us raced around like the Keystone Cops, grabbing camera bags, changing lenses, and searching for compositions.

I love the subtle pastels of the sky opposite the sun after sunset. Unlike the electric reds and oranges in the post-sunset western sky, the evening twilight sky takes on beautiful soft shades of pink and blue. Many photographers, mesmerized by the vivid colors to the west, miss this opportunity, leaving without even checking the possibilities behind them. But long exposures can bring this color out for 30 minutes or longer after the sun sets.

The delicate color that night was beautiful, but the moon's presence complicated things because the long exposures necessary to bring out foreground detail will completely blow the highlights in the moon. So I knew my window of opportunity was closing fast. But if there's a lesson in this story, I guess it's the example of the anticipation successful landscape photography requires. Despite the fact that I had no reason to think the moon would appear, upon my arrival I had mentally identified potential subjects (bristlecones) and visualized compositions that would work with the rising moon. This gave me a pretty good idea where I wanted to be and what I needed to do in the five minutes or so of photographable light.

When the usable light finally faded we stayed a bit longer appreciate the view. A rising full moon, a pastel sky, and a 4,000 year old tree--it doesn't get much better than that.

Absolutely magical image - great shot to return with. I received my copy of your book last week. Gary - it's superb! I haven't completed all the reading yet, but have obviously gone through all the photos. For me it's the bargain of the year - thank you!

@dobbino: Thanks, Rob, I'm glad you enjoy the book. I'm pretty amazed at the price too, especially for a hardcover book. I hope many people decide it will make a great Christmas gift. :)

Superb composition, colors, tones and POV. Well, everithing is perfect. I´d like to to take one like this :).

Magical scene; I love the rocky ground foreground, and the golden hue of late sunlight on the pine; the moon and sky offer that perfect softening effect that makes this one a beautiful photo all around.

As Viewfinder it's a magical scene, fantastic capture!!

Awesome! One for your next book.

You turned the bristlecones in real players on this out of space stage!

Wow! Incredible! The tones and textures are gorgeous! And I just love the sky. Bravo!

@Magda: Thanks, Magda. I love photographing this time of evening. The light is so even that the shadows disappear, and while the sky doesn't have spectacular electric color most people associate with sunset, the soft pastel is beautiful like a soft passage of music. Sublime.

Shockingly great image. Shows what can happen when you have the talent, but then put in the time and work to be on location like you did. Glad your effort was rewarded with such a grand image.

@Bob Towery: Thanks, Bob. My most rewarding pictures are the ones that required the most effort/discomfort. But it's funny that when I'm shooting I can be aware that I'm cold, but I am simply not bothered by it.

It sure doesn't another great shot...and even better story :)

Exquisite composition and detail. Wonderful color. There is something very spiritual about bristlecone pines.