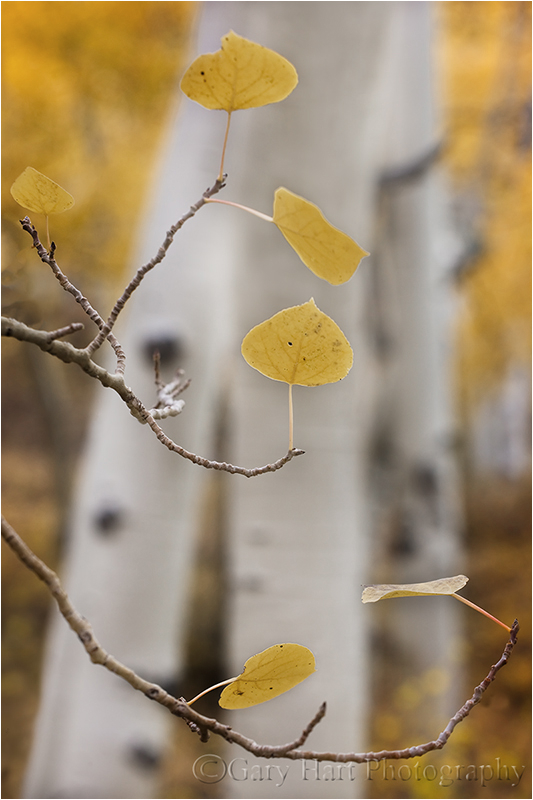 In preparation for this fall's workshops (starting next week!) I've revisited my images from last fall. In a perfect world I do it as soon as I return, but since fall is such a busy time for me, that rarely happens. More often I'll pull out one or two images that stood out when I took them, but the rest of my captures usually languish on my hard drive until things quiet down. So here I am a year later and just now finding quality time for last fall's images. Fortunately I'm not a high volume shooter, so at least I have a manageable number to get through. And it's kind of fun to stumble across little gems like this I forgot about. But anyway....

Today's aspen image is from my between-workshop scouting trip last fall. During my workshops my priority is (of course) the workshop group; my most productive photography comes on these solitary forays into nature when all my attention can be on the scene. That's when I can focus my attention on seeing beyond the obvious, on identifying something unique. I look for elements that stand out, something I can isolate against a complementary background.

On this morning I had photographed sunrise at North Lake and had no particularly agenda when my eye caught this beautiful grove of aspen in peek form. I pulled over wandered the forest until my eyes landed on this branch. After studying it from all directions I decided this was best (any other angle would have juxtaposed the foreground leaves against the background leaves, rendering them all but invisible) and set up my tripod. Once I found the perspective I wanted I set up my tripod and refined the composition. Exposure was easy in the overcast light, so instead of bracketing for exposure (something digital photographers should rarely require unless they're blending frames), I bracketed for depth of field. I wanted the background distinct enough to be immediately recognizable, but soft enough to blur distractions. In other words, this is image more about leaves in a forest than it is about the forest itself. At home, when I could compare them at home on my large monitor, I chose the version that most accurately reflected my vision.

Capturing brilliant color like this is pretty easy in even light (if you put your camera away when it's cloudy, you're missing the best light for nature photography). And a polarizer is essential. Even in shade a polarizer removes the reflective sheen that dulls the leaves' natural color--this effect isn't subtle and is clearly visible in your viewfinder as you turn the polarizer. For this image I intentionally underexposed by about two-thirds of a stop to more thoroughly saturate the natural color (that is, to avoid washing the color out). The final key to vivid fall color is getting the white balance right. Shade and overcast adds a blue cast; I always shoot in raw mode, so warming up this scene was simply a matter of dragging my raw processor's color temperature slider to the right until the leaves were the right color. In Photoshop I did a little subtle dodging and burning, and the final touch was a slight wrinkle in curves to bump the contrast.

Nicely set apart leaves against the background trunks. It's that time of year! (well at least for YOU!)

@Barbara Kile: Thanks, Barbara. Yes, I think fall is probably my favorite time of year for photography.

Simple but beautiful, and the color/tones is really fantastic.

@daniela scharnowski: Thanks, Daniela. I always appreciate your thoughtful comments.

they really seeem to pop off the screen! Wonderful!

BEautiful, very delicate ! Love it ! Focus and colors are outstanding !

WOW!!! This is beautiful. Perfect dof and focus. I love the tones. Lovely image.

Beautiful composition! The colour tones are very nice. Autumn is my favourite time of year.

Nice shot, Gary. I remember that place and now I am encouraged to re-visit either itself or my shots from '07... Have some fun in your workshop.

@joel: Thanks, Joel. It's always fun to revisit old images and vicariously relive past trips. It's even more fun to find something you didn't realize you had--tomorrow's image is a perfect example.

Wow! Stunning! The light/exposure are spot on! Amazing photography