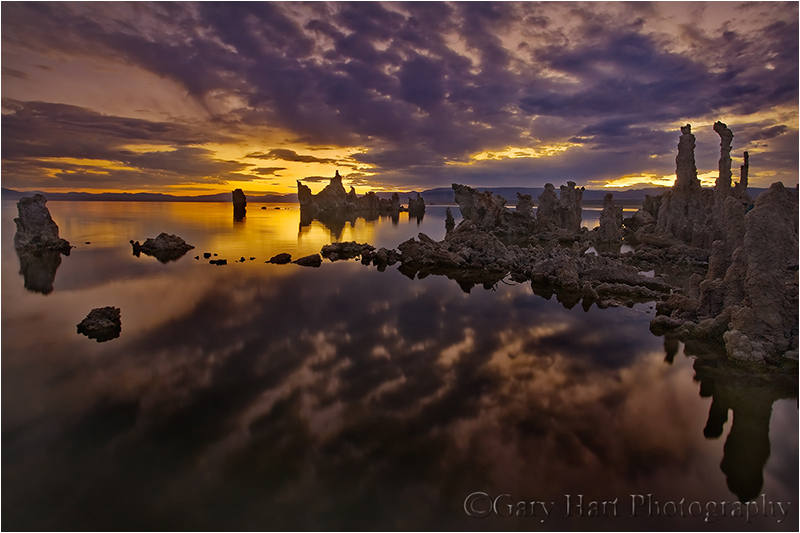 Here's an image from the first of two Eastern Sierra workshops last fall. Photographing Mono Lake's South Tufa at sunrise requires (okay, not literally, but you get the idea) arriving at least 30 minutes before sunrise (earlier is better). You can begin shooting here as soon as the eastern horizon starts to light-up, starting with long exposure tufa silhouettes, proceeding to captures of the fabulous color intensifying in the east, then turning around for the sunlight descending the looming Sierra peaks in the west, and culminating with fabulous warm light that skims the lake surface to cast long, dramatic tufa shadows. (Arriving early has the added advantage of allowing you to claim your turf, as it's pretty much a sure thing that by the time the sun rises the place will be swarming with photographers.)

The calm air on this chilly morning made for glass-like reflections. A wide composition allowed me to maximize the foreground reflection, and caused the tufa towers to shrink into the distance. I chose to put the horizon line toward the top of the frame to further emphasize the reflection. I positioned the tall tufa tower on the right to anchor that side of the frame; a smaller tufa island anchors the frame on the left.

A few words about color in nature. I love color and look for scenes where the color pops, but based on comments I hear and read (such as, "Those colors aren't real," whatever that means), I honestly believe many people forget how vivid color in nature is. Flowers, sunrises and sunsets, animals, water (I could go on but you get the point) all display brilliant colors that the camera struggles to reproduce.

I often wonder whether most people's memory of vivid scenes is superseded by their camera's inadequate rendering. I picture them looking at their images when they get home, and rather than understanding the limitations of their camera, they think, "Gee, I guess it wasn't quite as vivid as I remember."

The next time you're watching a sunset, stay with it for at least 20 minutes after the sun disappears, making a conscious effort to register the color for the duration. I think you'll find there's nothing subtle about even the most ordinary sunset. Mentally compare the color in the sky to anything you've ever captured in a photo. I bet the sky wins.

But photographing that color requires more than putting your camera to your eye and autoexposing. I frequently have to watch the RGB histogram when photographing a sunrise/sunset or backlit poppy (for example) because the luminosity histogram will show me I've captured all the detail, but it won't tell me when I've blown (oversaturated) a color channel, a very real possibility.

The unfortunate consequence of the camera's color capturing shortcomings is that many frustrated photographers overcompensate, with hideous results, in post-processing. And overcompensation isn't limited to digital shooters: Anyone remember Fuji Velvia? (This whole "film is better than digital" topic is a debate for another day, but I'll deliver the first salvo by saying that anyone who shoots Velvia is automatically disqualified.) I'm afraid Velvia and misuse of the saturation slider has damaged the credibility of all color shooters.

So what's a photographer to do? For me it's about getting the color right at capture to minimize or eliminate any need to touch the saturation control. Often this means underexposing much of the scene to hold the most vivid color. Today's Mono Lake image is a great example. I used a graduated neutral density filter to darken the sky some, but since I was shooting into the brightest part of the sky, I still had to underexpose the foreground to avoid losing color. In post-processing I was able to bring the foreground up a bit, but since I didn't want the foreground detail to distract from the color and shapes that define this image, my dodging was pretty limited. Making the color pop, while keeping it as accurate as possible, was a simple matter of slightly bumping the contrast.

That is a truly fine sunset, but the clincher is the reflection of the clouds at the same time.
Marvelous color and soft romantic feel.

a fine landscape with an equally fine editing......almost like a dream

This is a wonderful landscape shot at sunrise! Love the tones and the reflections of the sky! Outstanding work!

Amazing shot !! The compo is beautiful and colors are amazing !! Great job !

Yes, one should check the color channels for several colors in particular - and yellows, oranges and reds are the main ones. Great job with this sunrise!

You have brought up a really important topic Gary! I certainly have been guilty as a new photographer of over-saturating my colors! I am really trying to get my feet under me and figure out what my "style" will be, and I sure do not want it to be one that is recognized as looking "fake" or "over photo-shopped" I realize that the camera can see in ways our eyes can not and vise-versa, and I want to be able to make creative and original looking images. That is one reason I decided to return to school and force myself to know my camera inside-out, and be able to think before I shoot rather to react to what I see last minute (or last second!)
This is a beautiful example of what you describe...When I look at this image, I think only about the beauty of the place and that moment in time- I DON"T think "wow, I bet that was photo-shopped!"
This is a wonderful lesson on not only the ACTUAL beauty of nature, but a lesson on self - restraint!

@Tracy: Thank you, Tracy. Yeah, the saturation slider has lured many a new photographer. :) But nature's colors are amazing without any help, so the real trick is to learn how to get them in the camera. The more comfortable you get with your craft, the less you'll find it necessary to use saturation. I think it's great that you're going to school to advance your photography. Even before your decision you were getting some amazing images--the foundation school lays for you will only help.

WOW!!! I love this shot! The tones and reflections are simply beautiful. Well done! You are an amazing photographer.

Great picture from this extraordinary location!

I have to say, I wish I lived closer. I would love to meet and talk with you. I would alos like to partake in one of your workshops. Perhaps next year. Till then I will watch read learn and ogle from afar.

@Lee: Thanks, Lee--it would be great to have you join a workshop.

amazing. every point has something to say.

Just wonderful ! love the light , the sky and the reflection great shot

Another lovely shot, and thanks for the tip...I too have been guilty of over saturating...sigh, but from now on I think I will try and leave the slider alone, at least for nature shots :)

@Elora: Thanks, Elora. Yes, that saturation slider is a real temptress, isn't it? The truth is, I probably use it more to decrease saturation than I do to increase it.

This is a wonderful picture, right moment, right exposure, it's beautiful !

Wonderful scene! This picture is so beautiful. The colors, the landscape, the reflections...
You often write that the most popular places you shot is crowded with people. It's hard to imagine when you see this calm scenary.

@pernilla: Thanks, Pernilla. That's the advantage of an image's boundaries--you can frame the scene to include or exclude what you choose.

It's better than "picture perfect". You amaze me with every photograph of yours!

This could easily be another planet, amazing shot, and amazing place.