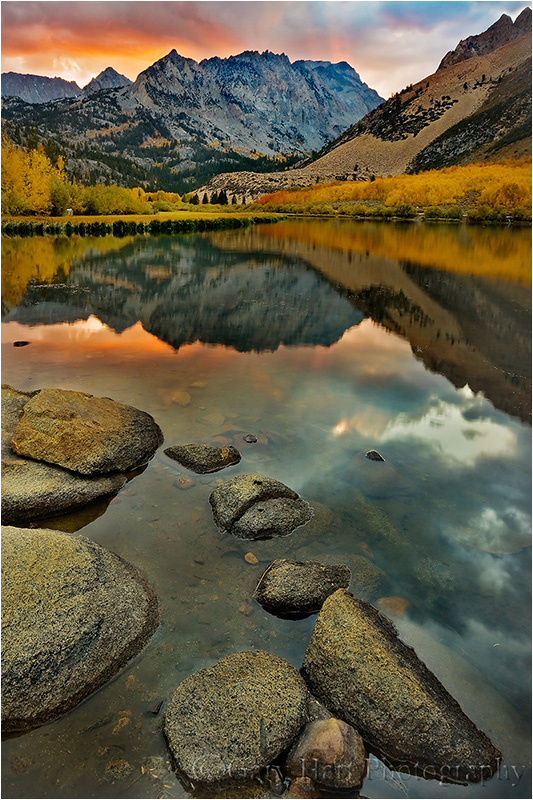 Last year my first Eastern Sierra fall workshop ended in Lee Vining on a Tuesday morning and the second one began Wednesday afternoon in Lone Pine. I used the time between workshops to photograph some of my favorite places in relative solitude, and scout the color that can change significantly from one day to the next this time of year. And what better excuse to return to one of my favorite Eastern Sierra locations.

North Lake has always been one of my favorite spots, but its elevation makes it also one of the first places to drop its color each fall. It had been great for my first group several days earlier, but I wanted to be sure the leaves were still hanging in there. I arrived late Tuesday afternoon to find the color was still fabulous. I also found the lake pretty much devoid of photographers (though there were a few fishermen strewn about the perimeter). I was particularly excited by the western sky, which was decorated with broken clouds that I knew would light up at sunset. I'd arrived early enough to plan my composition, ultimately selecting this interesting arrangement of granite boulders that seemed to lead right toward the sunset.

The trickiest part of a scene like this is getting the exposure right. I don't do HDR, opting instead to rely on the "old fashioned" way--careful metering and occasionally a graduated neutral density filter (or two). But before resorting to my GNDs, I spot meter on the brightest part of the scene (in this case the sky right above the peak) to determine the brightest exposure that won't blow the highlights. Then I spot meter on the darkest part of the scene I want to retain (in this case evergreens on the mountainside). If the difference is more than 5 stops (as it was in this case), I pull out my GNDs. Here I opted for a 3-stop soft transition GND. I put the darkest part of the filter in the brightest part of the sky and "hid" the transition in the mountains. Later I used my Photoshop soft-light dodge/burn filter (just a simple PS action that creates a layer that allows me to brush areas of the scene lighter or darker) to even the transition.

I don't talk too much about Photoshop in my blog for a couple of reasons. First, I'm far from an accomplished PS user, using it only enough to accomplish what I need (and I'll freely acknowledge that others may have better ways to do what I do). Also, I don't want people to think that Photoshop is necessary to create great images. The image has to be good in the camera--Photoshop is merely a tool to refine an already well-captured image. In case you're interested, my Photoshop workflow is limited minor cropping, dodging/burning (as described above), and curves adjustments to even out a scene and sometimes enhance contrast. As a general (but not absolute) rule I avoid the saturation slider. I also apply a light touch with Noise Ninja to most images, clone out sensor dust (sigh), and always do my own sharpening (no sharpening tools for me).

I love this - from the foreground rocks to the reflection, and then the great sky. The transition as my eye travels through the elements of the image is very pleasing.

@Barbara Kile: Thanks, Barbara. Photography is all about visual motion, isn't it?

An incredible "reflection" shot.
I love that heightened color...it just glows and shimmers.
It is a stunning shot even without the 'real' mountains in the picture.

Beautiful photo with nice light and great DOF sustained by the rocks in first plan. Colors light an reflections, as well as the option for a "vertical" photo, are 5*****.

wow fantastic colour and the water was so incredibly still! Great job, as always Gary!

Beautiful image Gary! North Lake is one of those spots we dream about when thinking of fall color in a high Sierra setting. Also, the warmth in the clouds reflects perfectly into what would have been a dead spot in the lake, and adds another spectacular layer to this image.

Beautiful capture Gary! I am hoping to see something like this when I am there next week.

@Brent Fraser: Thanks, Brent--next week may be a little before the peak color, but there will be a nice mix of green and yellow. It'll definitely be nice, especially if you go up to the highest locations: North Lake, South Lake, Lake Sabrina, and all the way to the top of Rock Creek Canyon. And don't forget to find a spot to shoot the crescent moon in the east before sunrise.

Lovely rendition of this oft-photographed spot-leave it to you to find something special in it. There's something almost startlingly immediate about the foreground rocks that really draw one into the scene. A question: What do you mean when you say you do your own sharpening?

@Rick Trautner: Thanks, Rick. There are many outstanding sharpening programs and plugins. But sharpening is such a critical part of the finished image that I don't want to trust it to something that can't think--it's the same reason I always spot meter in manual mode. So I use Photoshop's unsharp mask to sharpen my images. I realize there are better (and more complicated) manual sharpening techniques in Photoshop, but until I find a compelling reason to learn them, I'm sticking with what I know best.

I have to agree with you Gary. PS should be used for tweaking. The exposure and composition need to be planned and performed in the camera. The is a time for PS. Sharpening is a near and dear to my heart experience. I throw out thousands of shots. They are all acceptable, but cannot always be sharpened to my likings. Halos are distracting and artificial. I can spend hours trying to perfect the image with just the perfect amount of sharpening with out over doing it.
Now the thing about this shot that amazes me is the colours and the reflection. Shang - gri - la of the U.S.A. Well planned and captured. I wish some of my wildlife subjects would allow me the time to spot meter. LOL. Have a good one.

@Lee: Thanks, Lee. That's exactly why I don't shoot anything that moves.

Some times I don´t know what I like best, your texts or your images - joke - .
excellent work!

Amazing colours! Like the composition with the stones in the foreground. Autumn is my favourite season and this picture is a perfect example of how beautiful it can be!
As always your writing adds a lot of learning and thinking. I really like the idea of creating the picture in your camera and not just rely on the post processing tools.

@pernilla: Thanks, Pernilla. I'm still a film shooter at heart, even though I now use (and love) a digital camera. With film you had to get it right from the start, particularly with color transparencies, as there was no instant feedback and no darkroom self-fixes.

I really don't know how to express how much I love this image- I just get a wonderful feeling when I look at it! Your images and your words of experience and wisdom, always inspire me to go out and do my best. I know that your images don't just happen. They are a result of your hard work and persistence.

@Tracy: Thanks, Tracy. I really appreciate your words and support.

I am heading to Tom's Resort on the 8th of Oct. Where is North Lake? I cannot find it on any map searching sites....thanks!

@Barbara Lee: Take 168 out of Bishop toward Lake Sabrina. The turnoff to North Lake is on the right, less a mile before Sabrina. It's a beautiful lake, though there's a good chance the color will be well past its peak by the second week of October. Good luck.

Hello sir. Eloquent images indeed! In some of your images, you never have to put titles as viewers could infer a lot that fit their taste and their viewpoint. I'm just thinking out loud here. I wonder if you can tell me a little bit more about how you achieve such high dynamic ranges in your photos without turning it into a HDR. Again, good job! good luck sir! :)

@Fred: Thanks for your comments, Fred. You asked your question over a week ago but I've been away. I use graduated neutral density filters to extend the dynamic range of my images. I have a 3-stop soft, 3-stop reverse, and two stop hard. In some situations I'll even stack two filters, giving me up to 6 stops of neutral density. In post processing I generally dodge and burn the transitions to even the light.