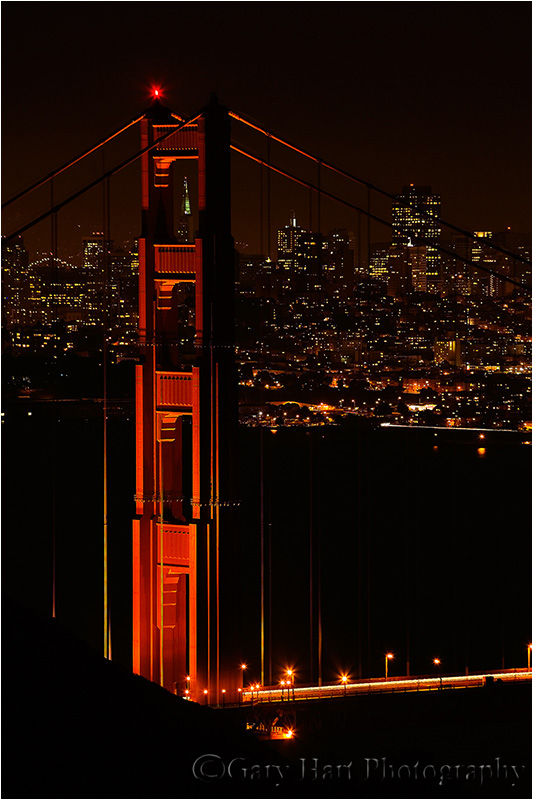 As I mentioned once before, San Francisco is the prime exception to my "rule" to avoid displaying the hand of man in my images. Nature always gets things right (it's up to us to find it), but occasionally we humans do too. San Francisco is a case in point.

Though I didn't grow up in San Francisco, I did grow up in the vicinity, and I went to college here, so I feel a special connection. This view from the Marin Headlands is probably at the top of my list of favorite San Francisco skyline views. Of course when I'm in the Berkeley Hills or at Treasure Island my opinion wavers a bit, but for today at least it's this view.

As you can see, it was quite dark when I exposed this, and in fact the only light visible here is manmade light. I exposed long enough to bring out the color, but not so long that the black areas (the sky, the San Francisco Bay, and the foreground hillside) lost their blackness. The resulting contrast makes the vivid color stand out with drama that (I hope) rivals the drama of being there.

A wonderful image. Those black areas do just as you say; they retreat and the lights and bridge glow.
The color of the bridge is both lively and sublime!
I guess you prove that rules are made to be broken, even your own.
What a shame if you hadn't taken this shot!

@Dulcie: Thanks, Dulcie. And of course we all know that "rules" are rarely absolute. Creativity starts where rules end.

Glad you broke the rules, because the photo is very beautiful. The brightnessof the bridge and the glowing of the lights over the black of the night is fantastic.

Absolutely fantastic, i just love the lights vs the dark background. Sometimes it's just fun to break out of the usual shots and experiment - glad you did!

@Elora: Thanks, Elora. I think vivid color really stands out against black and I'm always looking for opportunities to do it.

Awesome composition; you made this already amazing bridge and city background into a magical display of creative energy and lines and wonder. Having recently traveled there for the first time and been in the spot you're standing on to take this (but only during the day), I salute your camera work, skill and ability to envision such an incredible night scene.

@Viewfinder: Thanks, VF. San Francisco really is a magical city. So many of the best images succeed not because of what was included, but by what was omitted. Shooting this at night allowed me include only those elements that conjure the magic.

I love that the blacks are really black here!
I love that the tip of the Trans America Building is in the "window" of the bridge, too :)
It was a rare clear night!

@Tracy: Thanks, Tracy. There's one spot along the road where the tower and pyramid align. But one thing I like a lot there is how much moving along the road changes the perspective. It makes for an infinite number of possibilities.

AWESOME is truly the key word. This is far from the average shot of 'the GG' ... you are an ultimate instructor!
5 *****s are only a pittance!