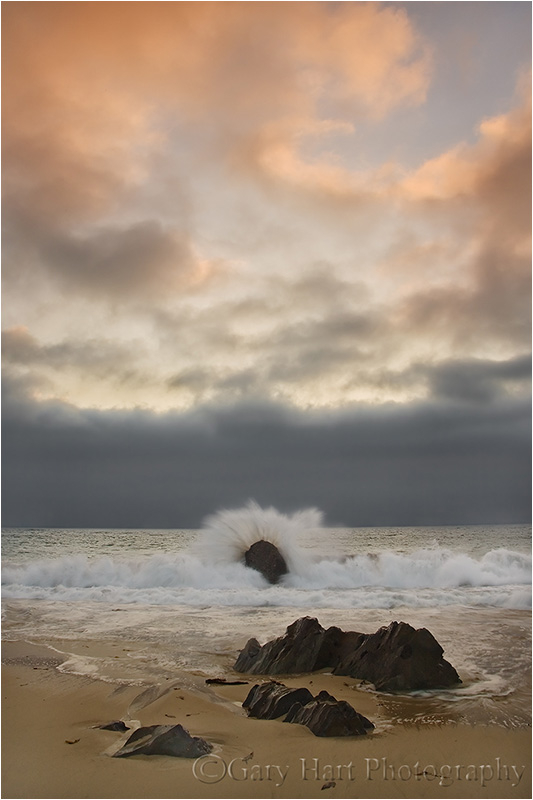 Regular readers know I spend a lot of time thinking about the way the camera's view of the world differs from the human experience of the world. For example, the Big Sur coast delivers multi-sensory input that includes a fine ocean mist, sweater-piercing wind, the smell and taste of salt air, and the relentless roar of the surf. None of this is available to my camera.

Of course with a camera I can record the scene, but merely documenting a location is a hollow substitute for being there. To create something memorable, something that more closely conveys the experience of being there, I start by identifying the elements of a landscape that move me. At Big Sur it's the transitory collision of wave and rock.

To my eye/brain a wave's crescendo is reduced to a memory before the moment fully registers, a single frame in a continuous movie. But my camera's ability to freeze an instant is the advantage I look for. When I arrive, rather than trying to make photos immediately, I put my camera down long enough to get a feel for the interaction of wave and rock (sometimes it's as simple as closing my eyes and following my ears). When I find something that draws me, I move around in search of a composition that emphasizes it.

In this case I watched the waves strike this rock from different angles. I liked the pattern of the foreground rocks and set up my tripod to feature them. I chose a vertical composition because the sky was beautiful, and I thought the rocks and waves would be lost at the bottom of a horizontal frame. Once I had the composition I liked, I stood back (remote release in hand) and waited for a wave to strike perpendicular to the imaginary line between me, the foreground rocks, and the large rock. Watching the swells appear several hundred yards out, I knew when the angle would be right well before the wave arrived. I captured several frames and chose the one I liked best.

Yes, I love the foreground rocks and great capture of the wave!

Wow! Fabulous!!! Strong composition and effect. The capture of the wave is spectacular

WOW!!! This is most definitely my favourite for the day! I simply love everything about this, from the wave, the sky, the rocks.... to the texture of the sand... Well done :)

The photo worth all the work and time you "spend" (whem we take photos we never spend time :)) ) checking for the best composition and angle. The composition is beautiful and I like the imaginary line cretaed by the rocks and, of corse, the colors of the sky.

This, like so many others, is beautiful. The foreground rocks and sand are wonderful, as is the gorgeous sky and then the 'icing', the perfectly timed spray of water as it hit the boulder!

Beautiful Gary! One of my favorite places on earth...No matter how many times we go there, or how many photographers capture images of this place, there will never be two that are just alike. I love the constant change that happens here.

@Tracy: No kidding, Tracy. Every time I go there something's different: the tide, the surf, the sky--it's always something.

Outstanding camera work, Gary. Didn't go to Garrapata Beach, but was at Pfeiffer Beach and saw similar things. It is an amazing place to visit from afar, as we did in July. Your description of the process of choosing your subject is very helpful and interesting to me. I guess I sort of follow a less meticulous but similar path in choosing mine. Your patience pays off with excellent end products like this one.

@Viewfinder: Yeah, Big Sur is an amazing place, and far different from the beaches you have in Florida. Not much for swimming, but the view is world class.

I do sense the smell and taste of salt air and I can hear the roar of the surf looking at this picture. Your have record it all. It's right there.
Love this picture.

@pernilla: Thanks, Pernilla--I can't ask for more than that.

The finest compliment I can give here, Gary - is to say that this is a perfect example of what you describe in your narrative. Beautiful and inspired.

Wow. Awe inspiring. You always capture the feeling in your photos, always!

@Elora: Thanks, Elora--the feeling of a scene is so personal, so it's nice to know when an image conveys that to others.