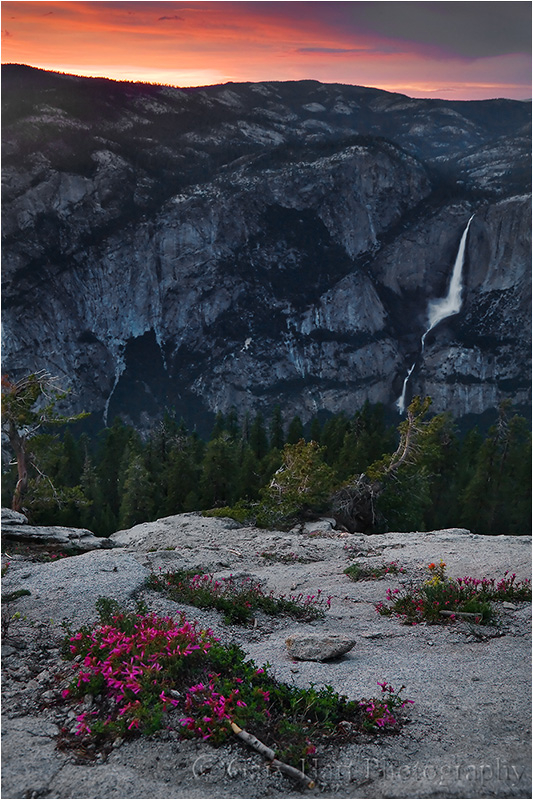 "Is that the way it really looked?" (second in a continuing series)

I'm asked that question quite frequently, and my response is always an emphatic, "No!" The camera and the eye see the world differently; it's silly for any photographer to claim an image is "exactly the way it looked when I was there." A camera's dynamic range, visual depth, and range of focus (to name a few) are all inferior to the human eye. A good photographer doesn't submit to these limitations, he or she turns them into an advantage. Conversely, there are wonderful things the camera can do that the eye can't. All these differences combine to give the experienced landscape photographer an opportunity to create evocative, artistic images in the camera, with very little post-processing required. Today's post continues an ongoing series expressing my thoughts on using your camera's vision to your photographic advantage (and without having to resort to Photoshop enhancement).

To me the most obvious difference between the camera's vision our own vision is that the camera is missing an entire dimension. In other words, it's trying to render a three dimensional world in a two dimensional medium. Of course there are things we can do to give the illusion of three dimensions, but (at least with current technology) an illusion is the most we can hope for.

Creating visual depth starts with placing elements throughout the front-to-back plane of your frame. Most people with a camera (notice I didn't say "photographers") see the world on the lateral, left/right plane. They walk up to a pretty scene, put their camera to their eye, and snap the shot. Often their results are very nice, albeit a bit flat. But taking the craft to the next level and making a picture rather than simply taking one, requires another step: If your subject is in the background (like today's picture of Yosemite Falls), try to find something of interest for the foreground. If your subject is in the foreground, be very conscious of what's in your picture's background.

I've observed that seeing the front-to-back aspect of the world is a major obstacle for most people. The key to mastering it is giving each element "visual separation" from the other elements at a different distance. Visual separation means putting space around the elements by not visually connecting objects on different planes. An example most of us can relate to is the snapshots of a grandma with a plant sticking out of her head. Of course the plant was clearly behind grandma in Uncle Bob's world when he snapped the shot, but he forgot to account for the fact that the photograph will be compressed onto a single two-dimensional print that erases the separation the missing depth-dimension provides.

Visual separation is not a rule to be followed religiously; rather, it's something to be ever conscious of as you compose your shot. Clearly there are times when it's appropriate, and even desirable, to occlude a background object with a foreground object, but the more aware you are of the front-to-back relationship of every element in your scene as you compose the shot, the more successful you'll be at adding the depth illusion to your images.

For today's image, I'd arrived on Sentinel Dome early enough to anticipate a nice sunset and identify the composition I wanted before the color arrived. While I knew a colorful sky and Yosemite Falls would be the primary subjects, I wasn't satisfied stopping there. Instead, I walked around until I found something of visual interest for the foreground, in this case several groups of wildflowers. I positioned myself so the various wildflower groups "moved" through the frame, setting up low enough to make the closest bunch a prominent part of the foreground, but not so low that it connected visually with the bunch behind it. A stiff breeze required ISO and aperture compromises, but focusing on the rock in the middle foreground and waiting for a lull in the breeze, I managed to achieve adequate sharpness throughout the frame.

(A horizontal example of this approach is my May 14 blog image from the Grand Canyon, where the various elements--shrubs, ridge, river, sun--lead the viewers' eyes through the scene from front to back.)

Next post: August 16 (please view my previous posts by clicking the arrow in the upper left of today's image)

Thanks for another great lesson, Gary! Timely for me, as I head off to Oregon :)
This photograph emphasizes your point so well, too- It feels like I could step right into it!

Great image!
It's very beautiful!
Love the colours and composition
Agree with Tracy: VERY good lesson - well said, thanks so much :)

@Anina: Thanks, Anina. It's also helpful for me to take the time to write these thoughts that I teach in my workshops.

you connected fg and bg in a tricky way, letting reach the crippled tree the waterfalls - I added your blog to my watchlist, very good work!

What an exceptionally good photo demonstration for your lesson ... perfect from bottom to top!

Another great shot! The warm colors of the sunset make the cool tones of the rest of the image so much more striking!

Absolutely stunning/breathtaking/refreshing! After reading the accomanying lesson, I'm inspired to see things differently too. Thank you!

The flowers make a fabulous foreground, and lead to a fantastic photograph.

Wow! Your images always have that "wow" factor! Amazing work you do! Gorgeous place to be...

Gary - A fantastic foreground in this and spectacular color as usual! beautiful, clean processing, and wonderful clarity also! I hope all is going well for you!